Actin Modifications and the Cytoskeleton

Actin, a highly expressed and ubiquitous cytoskeletal protein, is a major substrate for at least 17 post-translational modifications (PTMs)1.  PTMs are highly dynamic and often reversible processes where a protein’s functional properties are altered by addition of a chemical group or another protein to its amino acid residues.  With roles in cell growth, motility, trafficking, and division, it is imperative to understand how actin’s function is altered by PTMs.  The aim of this newsletter is to summarize what is known about 3 important actin PTMs: arginylation, glutathionylation, and phosphorylation (Fig. 1).

Arginylation is mediated by arginyltransferase (Ate1) and involves the addition of arginine on the N-terminus of beta-actin by a peptide bond2,3.  Arginylation can impact actin’s function in several ways.  For example, arginylation increases actin polymerization3,4 and strengthens the actin filament network3, the main structural support for maintaining dendritic spine morphology and size5.  Blockade/loss of arginylation is associated with defects in cell migration and myofibril contraction4,6-8 as well as collapse of leading edge lamella and reduced F-actin levels3.  The leading edge collapse is specifically due to decreased N-terminally arginylated beta actin4.  Besides the N-terminus, arginylation also occurs internally on the actin molecule on at least two residues1.  Internal arginylation is predicted to affect polymerization and interactions between actin and actin binding proteins1.  Ex vivo studies using fibroblasts cultured from Ate1 knockout mice also support a role for arginylation in actin function. 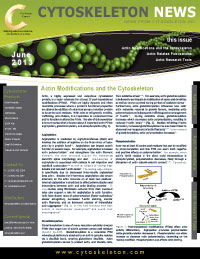 Actin has at least 35 amino acid residues that can be modified by phosphorylation and this PTM can exert both negative and positive effects on polymerization1.  For example, when actin’s Tyr53 residue in the slime mold Dictyostelium is phosphorylated, polymerization decreases, likely through a disruption of actin subunit-subunit contact15,16.  Conversely, in the slime mold Physarum, actin fragmin kinase (AFK), a calcium-dependent enzyme, phosphorylates actin’s Thr201-203 residues, leading to elongation of the actin filaments17-20.  This elongation is believed to be a result of reduced interactions between fragmin and actin.  Fragmin is related to the severing protein gelsolin and as such, controls filament length17-20.  The effect of Thr phosphorylation is reversed by protein phosphatases PP1 and PP2A21.  In both organisms, the changes in actin phosphorylation states are associated with cytoskeletal responses to extracellular events (e.g., locomotion, phagocytosis, signal transduction) and transition into a state of dormancy1,15-18.

In mammals, proteomic analyses have revealed that multiple kinases phosphorylate actin and vary by cell type, disease conditions, and external stimuli.  Unfortunately, many of the studies are correlational and do not report a direct relationship between a given kinase and actin phosphorylation1.  For example, Ser and Tyr residues on actin are phosphorylated in response to insulin via unknown kinases, leading to reduced DNAse I binding1 (Fig. 1).  Likewise, activation of the p21-activated kinase PAK1 leads to actin phosphorylation which is correlated with loss of stress fibers and altered F-actin localization22.  Similarly, Src kinase-driven phosphorylation of actin impairs actin polymerization1,23.  Several known actin kinases are casein kinase I1,24, cAMP-dependent protein kinase (PKA), and calcium/phosphoinositide-dependent protein kinase (PKC)25,26.  Casein kinase I phosphorylates actin similar to AFK (targets Thr and Ser residues and is calcium-dependent).  PKA and PKC act in an opposing manner with the former impairing polymerization and the latter stimulating it27,28 (Fig. 1). 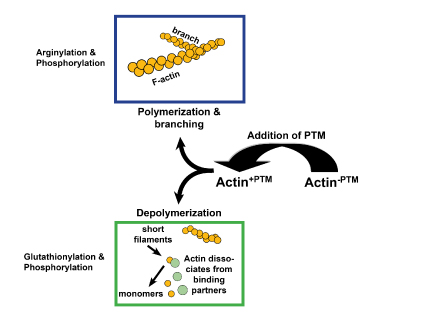 In summary, actin is a major cytoskeletal protein whose function is modulated by a variety of PTMs.  Despite actin’s relevance in all aspects of cell biology, our current understanding of how at least 17 different PTMs affect actin polymerization, stability, and binding is not complete.  As new PTM tools are developed, we can look forward to greatly advancing our understanding of PTMs not only for actin, but for many other cytoskeletal proteins.