In interacting with their human hosts, many species of pathogenic bacteria exploit the actin cytoskeleton or its associated molecular machinery, and they do so in different ways. Some manipulate it to form structures that allow them to survive on the cell surface. Others induce actin remodeling of the membrane to enter cells, and once internalized, certain species use actin polymerization to drive movement within or between host cells. Alternatively, some bacteria use actin polymers as a structural support for intracellular vacuoles, enabling them to replicate freely inside the host while providing protection from immune defenses.

Although pathogenic bacteria exhibit diverse behaviors such as these, many of them share the common characteristic of invading host tissues. They achieve this by entering cells using processes that resemble phagocytosis, macropinocytosis, or endocytosis. Various strategies are employed at the molecular level by different species, but these uptake pathways all converge on actin polymerization.1

Well-studied examples include the foodborne pathogens Shigella flexneri (bacillary dysentery) and Salmonella enterica serovar Typhimurium (gastroenteritis).2 Perhaps the most direct ‘actin hijacking’ strategy, as used by these species, is to inject effector proteins directly into the cytoplasm of the host cell, which is achieved using a type III secretion system (T3SS). These are ATPase-driven ‘syringe-like’ assemblies anchored in the double membrane of Gram-negative bacteria, with a protruding ‘needle’ for targeted delivery of secreted proteins. To gain access to the host cell cytoplasm, a ‘translocon pore’ is created by inserting pore-forming proteins into the plasma membrane,3 which then docks with the needle. The injected bacterial effectors mimic eukaryotic proteins and manipulate cellular pathways to the advantage of the pathogen. Among them, some cytoskeletal remodeling factors target actin directly, whereas others function indirectly by interacting with upstream regulatory proteins.4

For example, Salmonella translocates direct actin interactors (SipA, SipC) as well as mimetics of host guanine nucleotide exchange factors to activate Cdc42 and Rac1, thereby inducing actin polymerization. Subsequently, SptP is introduced to downregulate these activities, emphasizing the carefully orchestrated nature of the invasion process.5 Alternatively, Shigella induces actin polymerization mainly through recruitment and phosphorylation of cortactin.4 The end result for both species is the same: extensive actin-based membrane ruffling of the host cell, eventually leading to envelopment and internalization of the microbe; a process commonly referred to as the ‘trigger’ mechanism of invasion.

Once internalized, Salmonella lives inside the phagosome, whereas Shigella escapes and acquires actin-based motility via polarized surface expression of VirG/IcsA, a bacterial protein that sequentially recruits two host factors—N-WASP and the Arp2/3 complex—to drive actin polymerization and produce movement.6 This generates the so-called ‘comet tails’ characteristic of this method of propulsion, which was first discovered for Listeria monocytogenes as the way it moves within and between host cells, but is now known for several species. The ActA surface protein of Listeria recruits the host Arp2/3 actin polymerization complex directly,5 illustrating the divergence often seen between species. More recent work has uncovered a diversity of mechanisms used by motile pathogenic bacteria, which in turn produce variations in ‘comet tail’ ultrastructure and speed of movement.7 This is partly due to species-specific differences in the recruitment of actin-binding accessory proteins to comet tails, including factors such as profilin, filamin, and α-actinin.8 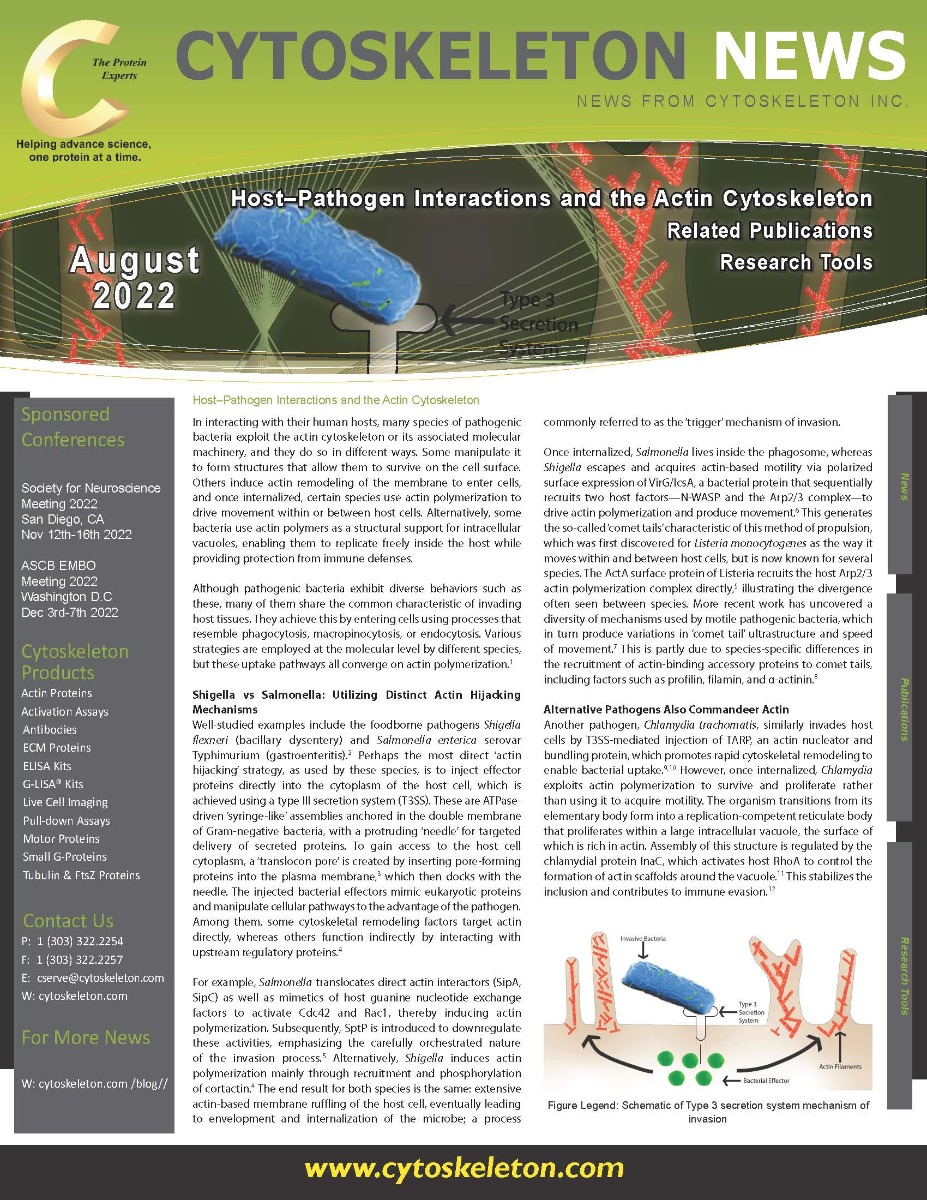 Above: Schematic of Type 3 secretion system mechanism of invasion

Another pathogen, Chlamydia trachomatis, similarly invades host cells by T3SS-mediated injection of TARP, an actin nucleator and bundling protein, which promotes rapid cytoskeletal remodeling to enable bacterial uptake.9,10 However, once internalized, Chlamydia exploits actin polymerization to survive and proliferate rather than using it to acquire motility. The organism transitions from its elementary body form into a replication-competent reticulate body that proliferates within a large intracellular vacuole, the surface of which is rich in actin. Assembly of this structure is regulated by the chlamydial protein InaC, which activates host RhoA to control the formation of actin scaffolds around the vacuole.11 This stabilizes the inclusion and contributes to immune evasion.12

In contrast, enteropathogenic and enterohemorrhagic Escherichia coli do not usually invade host cells, but instead reside on ‘pedestal’ protrusions induced by the bacteria. These structures are a hallmark of the ‘attaching and effacing’ lesions found in such infections, and their formation relies on actin-dependent processes, as does the accompanying effacement of gut microvilli (via actin reabsorption) that is also characteristic of the pathogenesis of these strains. All of the aforementioned processes are mediated by T3SS-delivered effectors, which are secreted in a defined sequence beginning with Tir, a transmembrane protein that is inserted into the host cell plasma membrane. Its cytosolic domains bind host factors including α-actinin13 whereas its central extracellular domain interacts with the bacterial surface protein intimin, thereby anchoring the pathogen to the host cytoskeleton via an elaborate series of bridging interactions. Pedestal formation requires actin polymerization driven by N-WASP-mediated Arp2/3 activation, although different E. coli strains recruit these factors using different pathways, again illustrating the considerable diversity found among host–pathogen interactions.

Using an alternative mechanism, some species such as Clostridium difficile (diarrhea and infectious colitis) secrete a binary toxin consisting of an actin ADP-ribosyltransferase, the active component, alongside a partner protein responsible for its translocation into the cytosol by receptor-mediated endocytosis.14,15 Once inside the cell, the enzymatic toxin component modifies G-actin at Arg177, blocking its ability to polymerize. When these ADP-ribosylated monomers are recruited to the barbed (growing) end of actin filaments, normal treadmilling is consequently inhibited. The net result is actin depolymerization, ultimately leading to cytoskeletal disarray and cell death. This is another type of immune evasion since it prevents uptake of the pathogen by professional phagocytes. Similarly, Yersinia pseudotuberculosis (Far East scarlet-like fever) avoids phagocytosis by injecting virulence factors that cause actin cytoskeleton collapse.16

Important new discoveries continue to be made. In an intriguing recent development, it was reported that actin polymerization is necessary to open the translocon pore essential for T3SS-mediated injection of pathogenic effectors.17 Another notable study found that Neisseria gonorrhoeae circumvents phagocytic killing by invading macrophages as colonies rather than as individual bacteria, which are quickly transported to lysosomes for degradation. Instead, the pathogen first establishes surface microcolonies before exploiting FMNL3, a host actin nucleating factor, to invade the macrophage and survive inside a distinct intracellular organelle surrounded by actin filaments.18 This might explain how gonococci can evade tissue-resident immune defenses when colonizing the urogenital tract.

In a broader sense, the study of host–pathogen interactions has contributed much to our knowledge of the actin cytoskeleton and its regulation in health and disease.5 For example, the discovery that invading bacteria can acquire actin-based motility informed related research on ‘vesicle rocketing,’ or intracellular vesicle trafficking, which also relies on actin-based propulsion.8 We anticipate that ongoing advances such as these should enable the development of much-needed new therapeutics for bacterial diseases, at a time when growing resistance to existing antibiotics is already recognized as a major public health concern.