Actin is a well-characterized, abundant, and essential cytoskeletal protein. Its dynamic properties allow it to shift between monomeric (G-actin) and polymeric (F-actin) states, which is vital for many cellular processes.  Actin’s dynamicity and function is regulated by many internal and external cues that are facilitated by actin binding proteins (ABPs), signal transducers, and others.  Additionally, several studies now indicate that actin itself is highly modified by post-translational modifications (PTMs); furthermore, intensive studies of specific actin PTMs have detailed their effect on actin dynamics, ABP interactions, and actin-dependent physiology1,2. For example, actin N-terminal acetylation, lysine acetylation, arginylation, SUMOylation, and ubiquitination have been studied.  Here, current studies on physiologic oxidation of actin at methionine (Met)44 and Met47 are summarized.

The oxidation field in general has focused on pathological oxidation (oxidative stress) induced by naturally formed oxidants like H2O2, and while it was initially hypothesized that oxidation was “toxic”, it is now known that oxidation is a signaling mechanism for both pathological and physiological events3.  Most of this work related to reactive oxygen species (ROS) focused on thiol-based cysteine (Cys) modifications. This is also true in the case of actin, whereby, most of the early work on actin oxidation utilized H2O2 treatment and resulted in altered F-actin content and polymerization activity as defined by enhanced lag time, slower polymerization rate, and lower polymerization extent4-6. Further investigation showed that H2O2-induced oxidation of actin initially targeted Cys374, but also targeted several Mets, including, Met44, Met47, Met176, Met190, Met269, and Met355 in vitro7. MetO oxidation happens in vivo under normal or stress conditions; however, Manta and Gladsyshev suggested that ROS-induced MetO formation in vivo occurs very inefficiently relative to the kinetics of reducing enzymes like MsrA8. Thus, the question of whether actin’s methionines can become oxidized enzymatically in vivo still remained unanswered. A seminal study by the Terman group identified a role for the enzyme, MICAL (molecule interacting with CasL), in mediating oxidation of Met44 and Met47 of actin in vitro9. These in vitro studies showed that MetO at Met44 was sufficient to promote both severing of filaments and decreased polymerization. Additionally, mis-regulation of actin MetO produced profound morphological consequences as overexpression of MICAL in Drosophila resulted in deformed bristle formation but was rescued with M44L actin mutants; thereby, defining its role in vivo9,10. A recent study identified a physiologic role for MICAL-1 oxidation of F-actin by determining that this mechanism is critical for depolymerizing actin during the terminal steps of cytokinesis11. These studies shed light on the physiologic importance that actin MetO has on actin’s molecular, cellular, and morphologic functions. 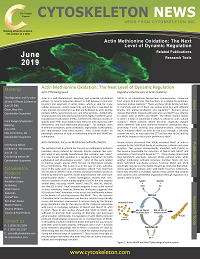