Neurodevelopmental disorders have been shown to be caused by chromosomal microdeletions; in particular, a subset of neurofibromatosis type 1 (NF1) patients with intellectual disability have a microdeletion event on chromosome 17q11.2, which include the NF1 gene and flanking regions. Recently, Wegscheld et al. sought to determine how the aforementioned microdeletion event impacted neurogenesis and proper neuronal development using iPSC cerebral organoid modeling.  They identified several characteristic phenotypes in organoids with the microdeletion; specifically, enhanced neural stem cell proliferation and neuronal maturation abnormalities characterized by enhanced neuronal apoptosis and modified differentiation.  Enhanced proliferation was attributed to the deletion of NF1 and enhanced Ras signaling, but this pathway did not appear to be involved in the observed maturation abnormalities.  Through screens and studies of surrounding genes contained in this microdeletion they identified cytokine receptor-like factor 3 (CRLF3) that displayed both decreased mRNA and protein levels relative to control organoids.  Interestingly, in NF1 patients they identified a subset with a point mutation in CRLF3 and many of these patients had measurable neural development disorders.  Utilizing shRNA approaches they proved that depletion of CRLF3 was sufficient to recapitulate the abnormal neuronal maturation phenotype.  Mechanistically, they identified N-cadherin and RhoA as critical signaling proteins that drives this phenotype, and they showed active RhoA levels were suppressed in shCRLF2 organoids.  Furthermore, they showed that activation of RhoA using CN03 was sufficient to rescue neuronal maturation and reverse the effects of CRLF3 depletion.  This study identified a CRLF3 as an essential gene within the NF1-TGD locus that plays a critical role in neuronal abnormalities.  Cytoskeleton’s RhoA G-LISA (Cat. # BK124) and RhoA activator (Cat. #CN03) was important for defining the mechanistic signaling pathway utilized by CRLF3 to regulate neuronal maturation. 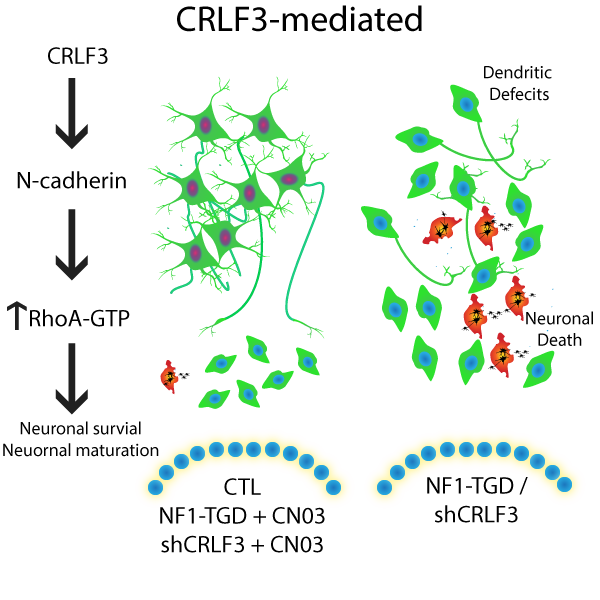 Above:Proposed model for CRLF3 signaling to RhoA as a mechanism to regulate neuronal maturation and survival.