Autism, clinically known as autism spectrum disorder (ASD), is a heritable and heterogeneous neurodevelopmental disorder with core symptoms that include difficulties with social interaction and communication, as well as repetitive behavior(1).  ASD is thought to be quite common with a prevalence approaching 1% in the worldwide population; additionally, due to its broad disease spectrum and sometimes ambiguous symptoms, it is likely that many people go undiagnosed.  Defining the underlying genetic and molecular mechanisms responsible for ASD has been elusive, and currently no single gene mutation accounts for more than 1% of ASD cases.  In support of this, a recent study, which investigated more than 35,000 human samples by whole exosome sequencing, identified 102 high-risk genes of which 53 were strongly associated with ASD(2).  These investigators aligned these high-risk ASD associated genes into 4 functional groups: 1. Gene expression and regulation, 2. Neuronal communication, 3. Cytoskeleton, and 4. Other.  The cytoskeleton has been shown to play a critical role in learning and development as well as neuronal development; thus, it is not surprising that dysfunction in cytoskeletal genes may play a fundamental role in ASD.  Below we summarize findings of three distinct ASD high-risk genes and the recent studies that highlight how they dysregulate the cytoskeleton and contribute to ASD progression. 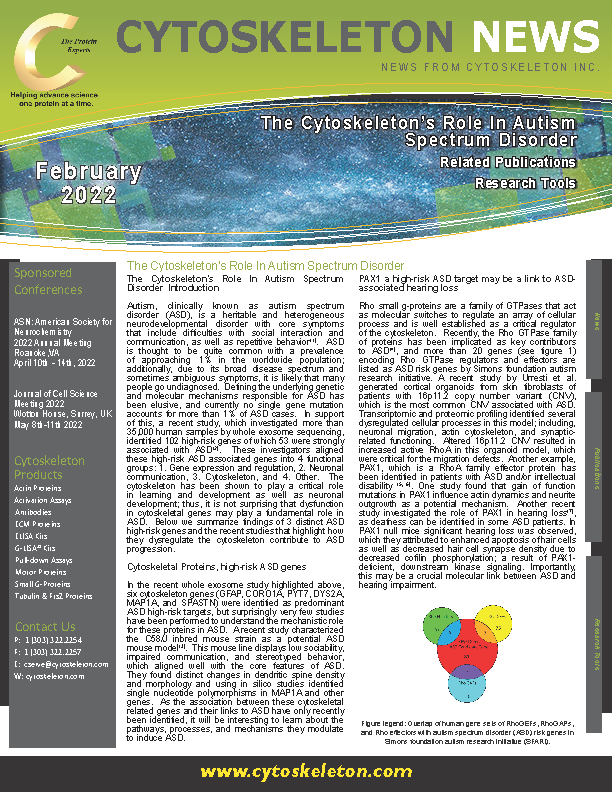