Tubulin α/β subunits are the key building blocks for microtubule (MT) formation, and the ability of MTs to dynamically switch between growth and shrinkage is a hallmark feature of these cytoskeletal structures.  Microtubules have many cellular functions including facilitating cell shape, cell movement, cell division, control of organelle transport, and many others.  Therefore, proper cell function is dictated by strict regulation of MT dynamics, which is controlled by several mechanisms including microtubule associated proteins (MAPs), signaling pathways, and post-translational modifications (PTMs).

In recent years there has been an abundance of evidence that tubulin is highly post-translationally modified, and these PTMs such as de-tyrosination, acetylation and polyglutamylation are critical for proper cell function(1).  What’s more, dysfunction of these PTMs have been linked to human disease(2).  Tubulin PTMs are highly studied in neurons because of the abundance of tubulin PTMs observed in these cells, as well as their link to neuronal disease. In particular, several studies have linked dysfunctional tubulin acetylation to neuronal diseases such as Charcot-Marie-Tooth disease and Alzheimer’s disease (AD)(3, 4).  Acetylation of tubulin occurs primarily on the lysine at position 40 (K40) on the α-tubulins of assembled MTs(reviewed in (5)). The predominant alpha-tubulin acetyltransferase is αTAT1. Deacetylation of acetylated tubulin is mediated by histone deacetylase 6 (HDAC6) or SIRT2. Acetylation at K40 has been shown to stabilize MTs (see Figure1), which promotes a long-lived phenotype in-part through modulating inter-protofilament interactions, stabilizing the MT lattice, and allowing for self-repair(reviewed in (5)).  Here we discuss newly identified functions of key regulators, novel binding partners, and competing PTMs that interact with this critical tubulin PTM and their effect on neurons. 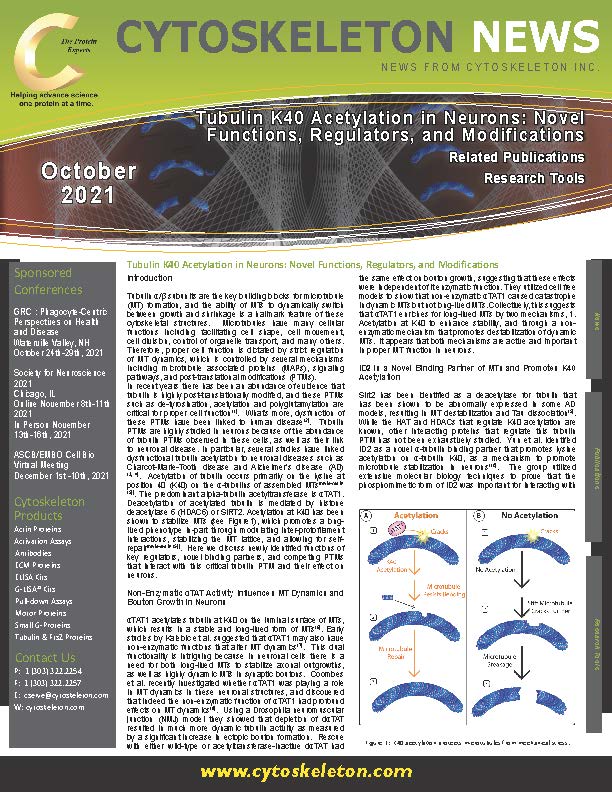