The epithelial Na channel (ENaC) is a heterotrimeric, membrane-bound ion channel that is essential to maintain sodium ion balance.  These channels mediate the first step of active sodium reabsorption thereby playing a critical role in maintaining extracellular fluid volume and blood pressure.  Understanding the mechanisms that regulate EnaC’s expression and function is critical.  Several studies performed in heterologous cell lines investigated ENaC ubiquitination, and showed that the alpha, beta, and gamma subunits of ENaC can be ubiquitinated to alter channel activity. However, whether the sodium channel is ubiquitinated in vivo and its role in native tissue has not been effectively investigated.  Recently, Frindt et al. utilized rat and mouse kidney to investigate the ubiquitination status of the ENaC subunits, and the physiological role of ubiquitinated ENaC in vivo.  Interestingly, they determined that alpha and gamma subunits of ENaC were modified as shown in cell culture; however, ubiquitinated beta ENaC was not present in vivo. They went on to show that a mouse model mutation mimicking Liddle’s syndrome altered the ubiquitination status of gamma ENaC supporting in vitro data on the Ubiquitin ligase binding site.  Finally, they fed rats a low sodium diet which significantly increased the amount of ubiquitinated ENaC; however, this corresponded with an overall increase of the respective subunits.  Therefore, they concluded that ubiquitination was playing a role in addressing the enhanced level of cleaved ENaC in response to sodium depletion. Identifying endogenous levels of post-translationally modified proteins in vivo can be challenging; however, these investigators successfully detected endogenous, ubiquitinated ENaC in vivo using Cytoskeleton’s Ubiquitination Detection Kit. 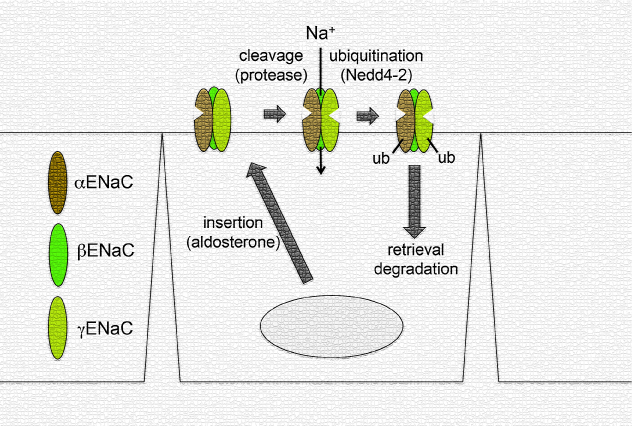 Products used in this citation: