Introduction
Severe acute respiratory syndrome (SARS) coronavirus 2 (SARS-CoV-2) emerged and spread rapidly worldwide leading to the coronavirus disease 2019 (COVID-19) pandemic.  While symptoms vary widely throughout the population there is growing evidence that the innate immune response plays a crucial role in determining the severity of COVID-19(1, 2).  Innate immunity utilizes pattern recognition receptors to recognize pathogen-associated molecular proteins (PAMPs) of the invading viruses, which results in the activation of signaling cascades and production of inflammatory cytokines; for example, type I IFN.  Proper activation of the innate immune system functions as the first line of defense for host cells and can lead to suppression of viral replication.  Interestingly, several key innate immunity signaling cascades utilize post-translational modifications as regulatory mechanisms and are often hijacked by viruses to evade immune detection(3).  We will discuss how SARS-CoV-2 specifically evades innate immunity through manipulation of these key signaling cascades through dysregulation of ubiquitination.
SARS Viral – Host Interactions
Due to the severity of the COVID-19 pandemic there has been an unprecedented need to understand how SARS-CoV-2 functions and its interaction with the host proteome.  A ground-breaking study by a consortium of research labs sought to identify target proteins and conserved processes utilized by the 3 family SARS members (SARS-CoV-1, SARS-CoV-2, MERS-CoV) in an effort to identify shared vulnerabilities that could be targeted therapeutically(4).  In their report they identified 389 host-protein interactors for SARS-CoV2, 366 interactors for SARS-CoV-1, and 206 interactors for MERS-CoV.  Intriguingly, they identified host processes that were targeted by all 3 viruses, such as, ribosome biogenesis and regulation of RNA metabolism.  Conversely, they also found processes targeted by SARS-CoV1 and MERS-CoV but not SARS-CoV-2 including translation initiation and myosin complex proteins.
All 3 viruses encode four structural proteins (Envelope, Membrane, Nucleocapsid, and Spike) as well as 16 non-structural proteins.  Coronaviruses also have a number of ORFs that encode for several accessory factors.  Through their investigation they found that some viral proteins like M, N, Nsp7, Nsp8, and Nsp13 displayed interactions that were conserved across all 3 viruses, suggesting an essential role for these proteins(4). Alternatively, they also identified several viral proteins that produced specific survival effects for SARS.  One SARS-CoV-2 specific interaction occurred between the viral protein ORF8 and the host protein iL-17RA, which is interesting, as aberrant IL-17 signaling has been linked to severe COVID-19(5). Another example was ORF9b interacting with Tom70. Tom70 is a mitochondrial outer membrane protein that has been shown to interact with mitochondrial antiviral signaling (MAVS) protein, a key member of the innate immune signaling cascade, to promote apoptosis during viral infection(6). Many other pathways and processes were also identified in this study, and in totality, highlights the complex interactions that occur between SARS viruses and host cells. 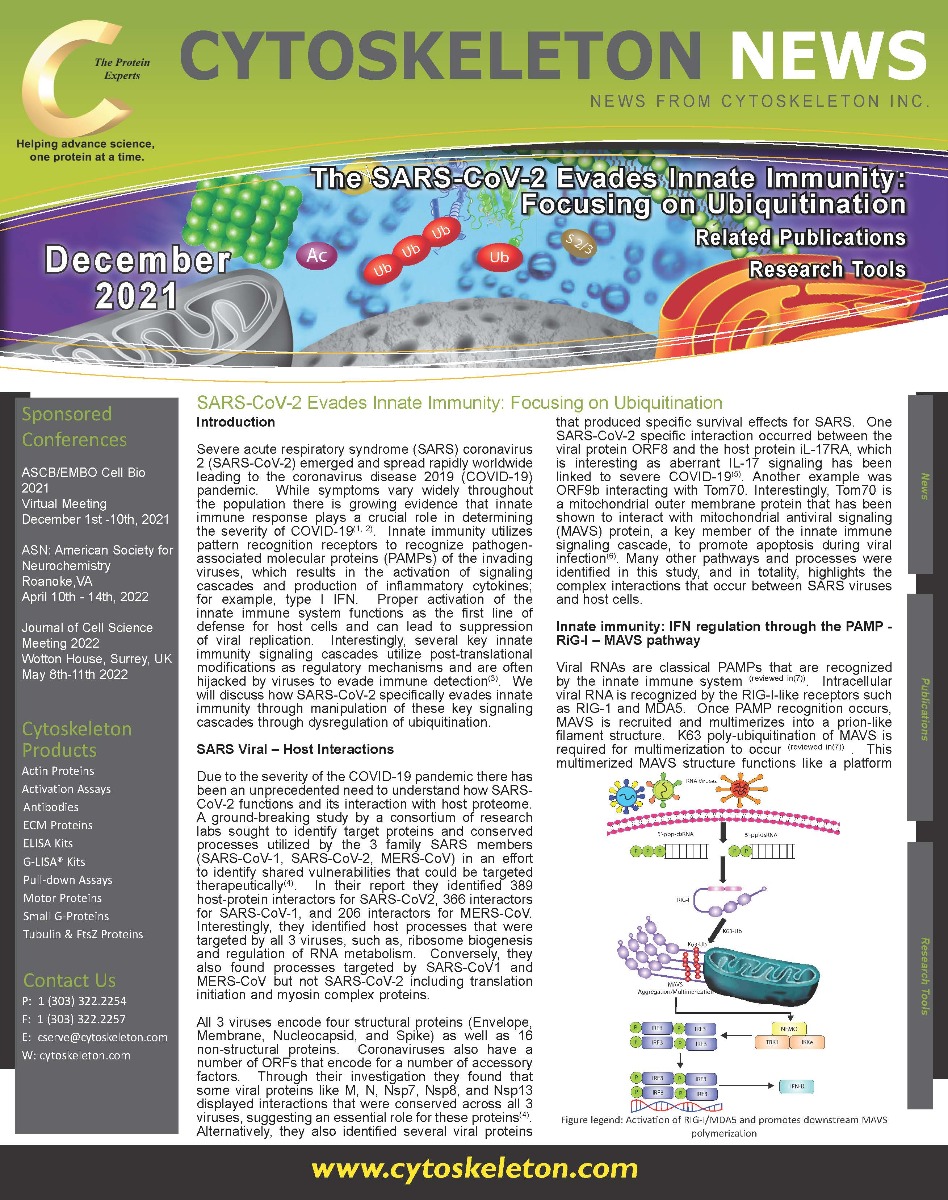 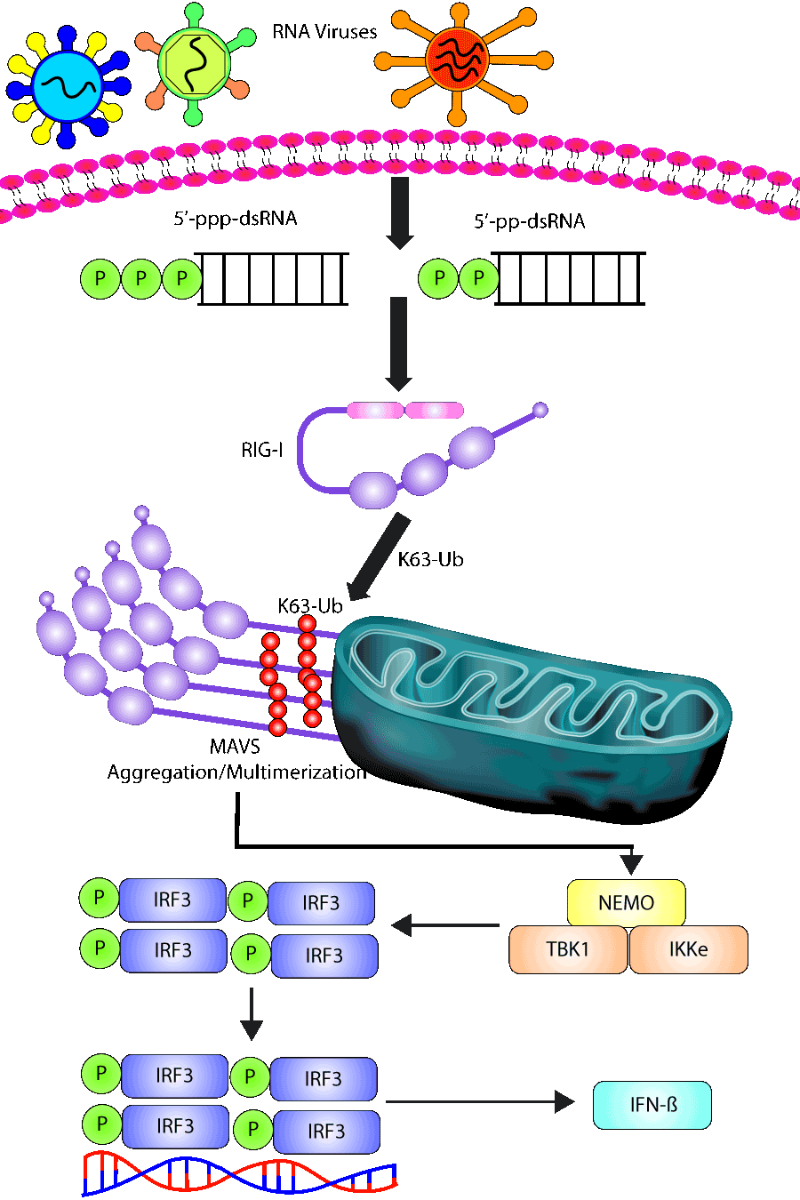 Innate immunity: IFN regulation through the PAMP - RIG-I – MAVS pathway
Viral RNAs are classical PAMPs that are recognized by the innate immune system (reviewed in(7)).  Intracellular viral RNA is recognized by the RIG-I-like receptors such as RIG-1 and MDA5.  Once PAMP recognition occurs, MAVS is recruited and multimerizes into a prion-like filament structure.  K63 poly-ubiquitination of MAVS is required for multimerization to occur (reviewed in(7)) .  This multimerized MAVS structure functions like a platform for downstream activation of NEMO-TBK1-IRF3 which subsequently upregulates IFN-I (see figure 1).  This pathway has been shown to be critical for innate immunity, anti-viral response to human influenza virus.  A recent study by Wang et al. determined that the dimerization domain of SARS-CoV2 nucleocapsid undergoes liquid-liquid phase separation with RNA which leads to a reduction of K63 polyubiquitination of MAVS, decreased multimerization, and ultimately suppresses innate antiviral immunity response(8).  Another group determined that during SARS-CoV-2 infection the viral protein ORF9b accumulates and binds NEMO and prevents its k63-linked poly ubiquitination to prevent MAVS signaling to IRF3 as an alternative mechanism to disrupt RIG-I – MAVS- IFN signaling in an effort for the virus to escape innate immune responses(9). To be clear, these are two selected examples of many by which SARS-CoV-2 disrupts the host machinery to evade innate immunity defense.  This is reflected in a recent multilevel proteomics study, which showed that inhibition of IFN occurred at the transcriptional and proteomic level by multiple SAR-CoV-2 proteins including OR3, ORF6, ORF7a, ORF7b, and ORF9b(10).
Ubiquitin Machinery and SARS-CoV-2
There are several examples where the host ubiquitin machinery becomes hijacked by viruses; for example, a recent study identified the deubiquitinase, USP18, as a regulator of antiviral immunity that functioned by promoting K63 linked poly-ubiquitination of MAVS(11).  SARS-CoV-2 is no exception, and within the aforementioned multi-level proteomics study several SARS viral proteins were identified that interacted with a plethora of ubiquitin machinery(10). One example was the viral protein ORF3, which was shown to interact with E3 ligases TRIM47, WWP1, WWP3, and STUB1.  Curiously, they also identified ORF3 interacting with the deubiquitinase USP8, indicating a complex interaction network between viral proteins and the ubiquitin machinery exists. They also found that 21 of the 27 detected SARS proteins were ubiquitinated, and in particular nucleocapsid, spike, Nsp2, and Nsp3 were heavily modified. Collectively, these data communicate the importance of ubiquitination in the SARS viral life cycle and in particular its ability to escape innate immune antiviral responses.
Summary
Due to the seriousness of COVID-19, unprecedented efforts were made to develop vaccines, antiviral therapies, and even repurposing therapeutics.  Two prominent success stories of drug repurposing to treat SARS-CoV-2 was the approval of Remdesivir and dexamethasone. Dexamethasone, a host-directed anti-inflammatory, is now widely used and supports the rationale towards understanding host proteome responses to SARS viruses; as targeting host proteins rather than the rapidly mutating virus may be an effective therapeutic strategy. Clearly, the ubiquitin machinery and ubiquitinated target proteins are of critical importance to SARS viruses; in particular, its strategy to avoid innate immune anti-viral responses. It’s possible that these signal pathways and processes may become a therapeutic target for combating SARS-CoV-2; in fact, the study by Wang et al. developed a short interfering peptide that disrupted SARS-CoV-2 nucelocapsid dimerization, which reversed suppression of MAVS multimerization and rescued innate immune responses in vitro and in vivo (8).  Cytoskeleton is proud to offer a collection of tools to investigate post-translational modifications like ubiquitination. </sup(8)<>