Formation of the extracellular matrix (ECM) requires cells to secrete ECM proteins. Assembly is achieved by following a strict hierarchical assembly pattern which begins with the deposition of fibronectin filaments on the cell surface, a process known as fibrillogenesis . Cells continue to remodel the ECM by degradation and reassembly mechanisms, the dynamic nature of the ECM being particularly apparent during development, wound healing, and certain disease states. 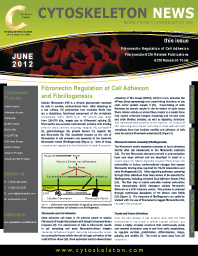 Cellular fibronectin (FN) is a dimeric glycoprotein secreted by cells in soluble, nonfunctional form. After attaching to a cell surface, FN polymerizes into insoluble fibrils that are a ubiquitous, functional component of the vertebrate extracellular matrix (ECM). FN subunit sizes range from 230-270 kDa, largely due to differential splicing. Fibronectins are complex multi-domain proteins with binding sites for many partners including, integrins, syndecan-4, gelatin/collagen, growth factors, heparin, and fibronectin. This newsletter focuses on the role of fibronectins in cell adhesion and assembly of the insoluble fibronectin matrix (fibrillogenesis) . Both of these processes are regulated by the Rho family of small G-proteins. 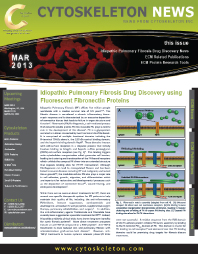 Idiopathic Pulmonary Fibrosis (IPF) afflicts five million people worldwide with a median survival rate of 3-5 years. This fibrotic disease is considered a chronic inflammatory tissuerepair response and is characterized by an excessive deposition of connective tissues that leads to failure in organ structure and function. Fibronectin (FN) fibrillogenesis, a cell-mediated process that converts soluble plasma FN into insoluble FN, plays a central role in the development of this disease5. FN is a glycoprotein secreted as a dimer connected by two C-terminal disulfide bonds. It is comprised of multiple functional domains including the N-terminal 70 kDa domain, the 120 kDa central binding domain, and the heparin-binding domain HepII. These domains interact with cell-surface receptors in a stepwise process that initially involves binding to integrin and heparin sulfate proteoglycan (HSPG) cell-surface receptors

UBE2L3, a Partner of MuRF1/TRIM63, Is Involved in the Degradation of Myofibrillar Actin and Myosin

The extracellular matrix (ECM) is a structural network consisting of extracellular macromolecules, such as collagen, fibronectin, glycoproteins and laminin that provide support to surrounding cells through facilitating cell adhesion, cell differentiation, and cell-to-cell communication.  Many studies have investigated the regulatory mechanisms activated by ECM proteins but, but there is still much to learn.  A recent study by Li. et al. systematically investigated fibronectin and galectin-8 effects on cellular responses either alone or in combination.  Detailed timecourse studies of Hela cells grown on fibronectin or galectin-8 coated substrates revealed distinctly different cell spreading patterns. Specifically, galectin-8 coating produced pronounced lamellipodia formation without pause, whereas fibronectin lamellipodia occurred more erratically... 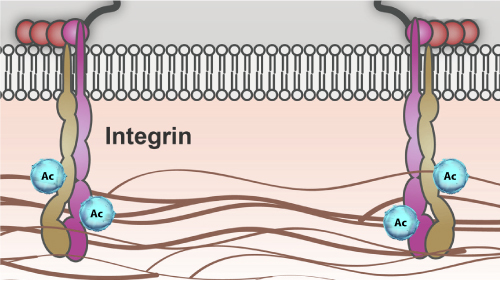 Vega et al. recently identified a regulatory lysine acetylation mechanism that controls extracellular matrix (ECM) assembly and production in mesangial cells.  One of the major complications of diabetes is diabetic nephropathy, with fibrosis being a hallmark of the disease.  Excess deposition of ECM, produced by mesangial cells, occurs in the glomeruli. Fibronectin (FN), a major component of the mesangial ECM, is an abundant and ubiquitous ECM protein important for interactions between cells and the surrounding matrix.  Vega et al. investigated the effects of acetylation on FN assembly and identified acetylated β1 integrin as a mediator of cell-FN interactions and downstream FN matrix assembly. As a first step, deacetylase inhibitors were used to treat mesangial cells, which increased acetylation as well as FN matrix assembly.....

Have a technical question about our tools? Send us an email at tservice@cytoskeleton.com and our experts will anwser any question you may have!