The actin binding protein cortactin plays an important role in several cellular functions involving plasma membrane changes that are dependent on a dendritic (i.e., branched) actin network: cell motility employing lamellipodia, clathrin dependent and independent endocytosis, host-pathogen interactions, maintenance of endothelial barrier integrity, and invadopodia-mediated cell invasion1.  Cortactin is a monomeric ~80 kDa protein that derives its name from its intracellular colocalization with cortical actin at the periphery of the cell2.  The amino terminus of cortactin harbors a domain rich in acidic amino acids (N-terminal acidic domain; NTA) that interacts with the seven subunit Arp2/3 complex that promotes dynamic actin filament branching3.  Cortactin’s NTA domain contains a DDW (Asp-Asp-Trp) motif that has been observed in the Arp2/3 binding regions of other known actin nucleation promoting factors (NPFs) as either DDW or DEW (e.g., WASP, N-WASP, Myo3, ActA)4 (Fig. 1).  NPFs are divided into two classes based on their role in promoting Arp2/3-mediated filamentous actin (F-actin) branching5.   Class I NPFs like those mentioned above have a primary role in promoting Arp2/3 activation to drive filament branching, whereas Class II NPFs like cortactin function in branch formation and stabilization of the dynamic branched actin assembly6,7.  Notably, while cortactin can directly activate Arp2/3 mediated F-actin branching, this activity is much weaker than is observed for Class I NPFs6.  This is due in part to cortactin lacking the monomeric globular actin (G-actin) binding domain of class I NPFs5.  Consistent with cortactin’s role in stabilizing branched filaments, it has a central domain with 6.5 repeats of a 37-residue long sequence that binds F-actin2,4 (Fig. 1).  This domain is followed by a helical region and a proline-rich region, containing multiple sites of post-translational modifications (PTMs), and an SH3 domain that is used to recruit other proteins, including the Class I NPF N-WASP to the Arp2/3 complex at the filament branch point (for a list of binding partners, see ref. 8). 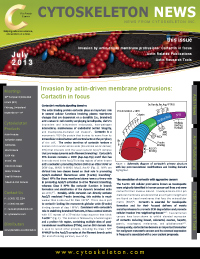 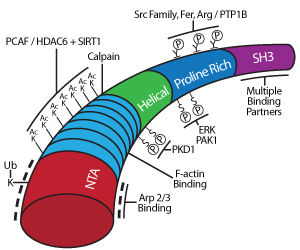 The association of cortactin with aggressive cancers

The F-actin rich cellular protrusions known as invadopodia were originally identified in human cancer cell lines and were named for their invasive nature9.  Invadopodia are 0.8-1 µm diameter membrane extensions that are 2-5 µm in length and are found on basal membranes that face the extracellular matrix (ECM)10.  Cortactin is essential for invadopodia formation and for their focused delivery of matrix metalloproteases to promote ECM degradation and promote cellular invasion into neighboring tissues10-12.  Several human cancers have been shown to exhibit elevated expression of cortactin including breast, colorectal, ovarian, hepatic, gastric, esophageal, melanomas, and glioblastomas8,13.  Consequently, cortactin has become an important biomarker for malignant metastatic cancers and its elevated expression is frequently associated with a poor patient prognosis.

The importance of cortactin post-translational modifications

As new actin research tools, including those to study the PTMs of actin and its associated proteins, become available, the physiological functions of cortactin will be further elucidated using purified actin and actin binding proteins from Cytoskeleton, Inc.