Therapeutic targeting of the Ubiquitin Pathway

There are over 670 post translational modification (PTM) types currently described (1) and it has been estimated that up to 21% of disease associated single nucleotide missense mutations are located in protein PTM sites (2).  Besides the flagship PTM target of the phosphorylation pathway (currently 65 FDA approved kinase inhibitor drugs [3]), drugs targeting the acetylation, PARylation and ubiquitination PTM pathways have received FDA approval (4-5, Table 1). This newsletter briefly reviews some of the therapeutic advances in targeting the ubiquitination PTM pathway and highlights the clinical importance and potential of PTMs in drug discovery.
Protein ubiquitination can generally be divided into proteolytic and non-proteolytic mechanisms of action. Non-proteolytic functions include protein scaffolding, signal transduction and transcriptional regulation (6). The proteolytic system, which targets ubiquitinated proteins to the proteosome for degradation, is the major focus of current drug development efforts. 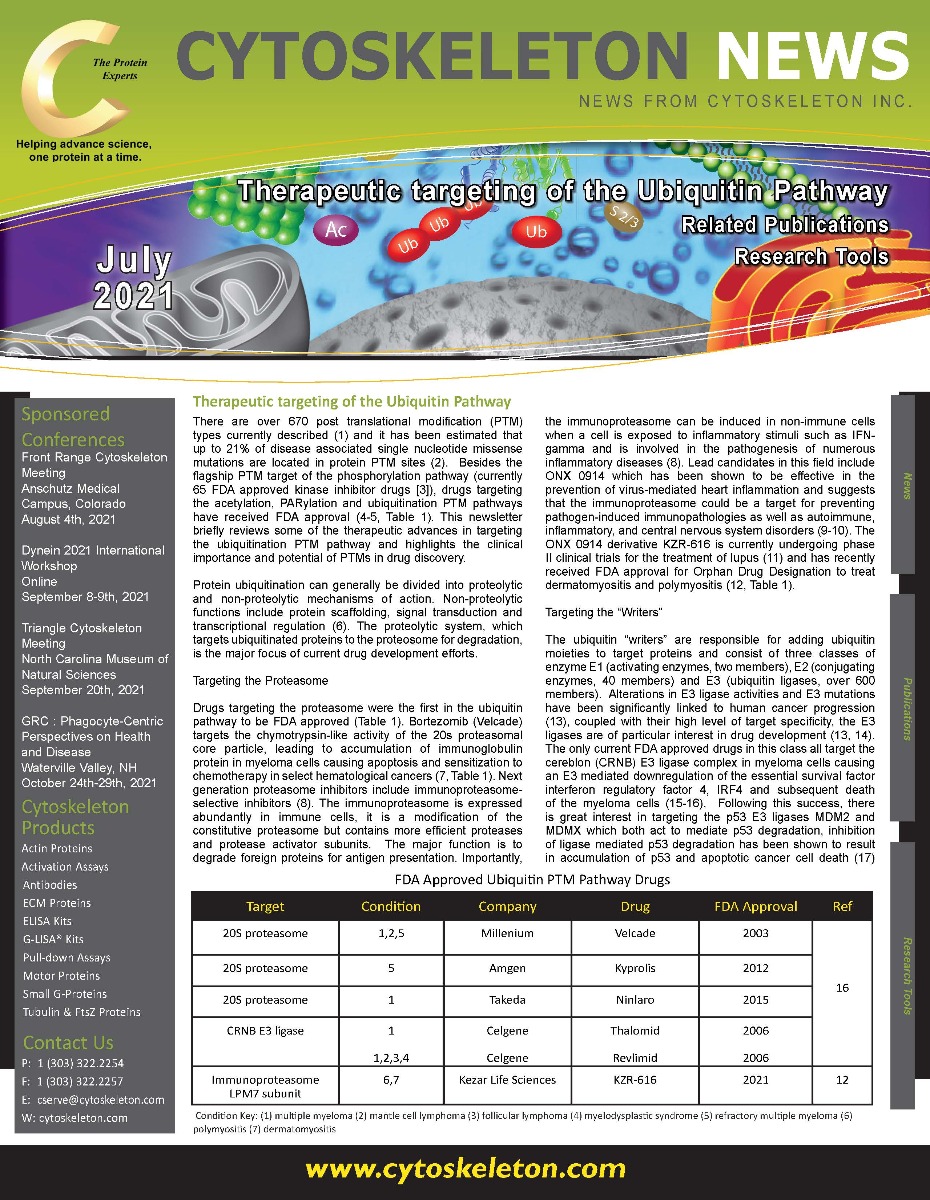 Targeting the Proteasome
Drugs targeting the proteasome were the first in the ubiquitin pathway to be FDA approved (Table 1). Bortezomib (Velcade) targets the chymotrypsin-like activity of the 20s proteasomal core particle, leading to accumulation of immunoglobulin protein in myeloma cells causing apoptosis and sensitization to chemotherapy in select hematological cancers (7, Table 1). Next generation proteasome inhibitors include immunoproteasome-selective inhibitors (8). The immunoproteasome is expressed abundantly in immune cells, it is a modification of the constitutive proteasome but contains more efficient proteases and protease activator subunits.  The major function is to degrade foreign proteins for antigen presentation. Importantly, the immunoproteasome can be induced in non-immune cells when a cell is exposed to inflammatory stimuli such as IFN-gamma and is involved in the pathogenesis of numerous inflammatory diseases (8). Lead candidates in this field include ONX 0914 which has been shown to be effective in the prevention of virus-mediated heart inflammation and suggests that the immunoproteasome could be a target for preventing pathogen-induced immunopathologies as well as autoimmune, inflammatory, and central nervous system disorders (9-10). The ONX 0914 derivative KZR-616 is currently undergoing phase II clinical trials for the treatment of lupus (11) and has recently received FDA approval for Orphan Drug Designation to treat dermatomyositis and polymyositis (12, Table 1).
Targeting the “Writers”
The ubiquitin “writers” are responsible for adding ubiquitin moieties to target proteins and consist of three classes of enzyme E1 (activating enzymes, two members), E2 (conjugating enzymes, 40 members) and E3 (ubiquitin ligases, over 600 members).  Alterations in E3 ligase activities and E3 mutations have been significantly linked to human cancer progression (13), coupled with their high level of target specificity, the E3 ligases are of particular interest in drug development (13, 14). The only current FDA approved drugs in this class all target the cereblon (CRNB) E3 ligase complex in myeloma cells causing an E3 mediated downregulation of the essential survival factor interferon regulatory factor 4, IRF4 and subsequent death of the myeloma cells (15-16).  Following this success, there is great interest in targeting the p53 E3 ligases MDM2 and MDMX which both act to mediate p53 degradation, inhibition of ligase mediated p53 degradation has been shown to result in accumulation of p53 and apoptotic cancer cell death (17) and clinical trials are ongoing for several compounds, targeting both hematologic and solid tumors, including ALRN-6924, NVP-CGM097, AMG232 and MK-8242 (18-19).
Targeting the “Erasers”
The ubiquitin “erasers” (approx. 100 members) are termed deubiquitinases (DUBs) and are responsible for removal of ubiquitin moieties from target proteins. DUBs can be divided into six families, five are cysteine proteases, one metalloproteinase. There has been longstanding interest in developing DUB inhibitors as they are known to be associated with a number of pathologies, including cancers, mitochondrial diseases and neurodegeneration (20). Currently there are no FDA approved DUB targeted therapies as drug development was slowed by the similarity between the active sites of many DUBs prohibiting development of selective drug candidates. Furthermore, the lack of knowledge of DUB structure limited the potential to develop specific allosteric compounds, however, recently structural information has become available allowing DUB targeted projects to move forward (21).  A target of   particular interest is USP7, the DUB regulating p53 stability and an agonist of MDM2. Inhibition of USP7 by promising drug candidates such as compound 4 and GNE-6776 have been shown to enhance the ubiquitination and degradation of MDM2 and increase levels of p53 resulting in cancer cell apoptosis (22-23). A further target of interest is the mitochondrial specific DUB USP30 (21). Inhibition of USP30 by candidate drugs from Mission Therapeutics have been shown to activate mitophagy, resulting in efficient degradation of damaged mitochondria which could help prevent impaired neuronal function that causes Parkinson’s disease (21).
PROTAC Approaches
Proteolysis-targeting chimera (PROTAC) is a powerful technology that utilizes the power of the ubiquitin system to selectively target a protein of interest for proteolytic degradation. A PROTAC consists of two covalently linked protein binding entities, one binds to the protein target of interest, the other to an E3 ubiquitin ligase. PROTAC binding therefore results in selective target protein degradation.  This approach should be widely applicable to many therapeutic targets and is currently an area of intense investigation (24). The PROTAC MDM2 compound MD224 utilizes an MDM2 inhibitor:thalidomide PROTAC to target the p53 E3 ligase for degradation and is currently in clinical trials (18).
In summary, the ubiquitination pathway is of major interest as a therapeutic drug target. Elucidation of the mechanisms regulating ubiquitination and the targets of this modification have developed rapidly since the discovery of this pathway in the late seventies.  Cytoskeleton is pleased to offer a line of Signal-Seeker products aimed at helping researchers further elucidate the mechanisms regulating this PTM.