The discovery of the K-Ras GTPase occurred during an in vitro assay screen with the active transformation of mouse NIH 3T3 fibroblasts.  K-Ras is one of three Ras oncogenic isoforms (N- and H-Ras being the others). The human K-ras gene contains an alternative fourth coding exon, resulting in the production of two different splice variants termed K-Ras4A and K-Ras4B. The two isomorphic proteins differ by 25 amino acid residues at the carboxy terminus. Ras4A is considered a minor splice variant, meaning that the majority of oncogenic K-Ras research focuses on K-Ras4B. Within the K-Ras protein, there are four domains. The first domain includes 85 amino acids at the N-terminus which are found to be identical in H-, K-, and N-Ras. The following 80 amino acids form a second domain, showing less conservation (70-80%) between the Ras proteins. The third domain spans the rest of the K-Ras protein, except for the last four amino acids, and represents a hypervariable region. The highly conserved carboxy-terminal motif CAAX (where C stands for cysteine, A for any aliphatic residue, and X for any uncharged amino acid) is the result of post-translational modifications and forms the last domain. Depending on the splice variant, K-Ras consists of either 189 or 188 amino acids with a molecular weight of 21 kDa (for either variant).

Crystallography studies revealed that the catalytic domain spans residues 1 to 171, including the region involved in guanine nucleotide binding where residues 10-16 and 56-59 interact with b- and c-phosphate, and residues 116-119 and 152-165 interact with the guanine base. The so-called core effector region (located between residues 32-40), represents an essential element for all interactions with putative downstream effectors and the GTPase-activating proteins (GAPs). A region encompassing the last four amino acids at the C-terminus (residues 186-189) is essential for the attachment of K-Ras to the plasma membrane.

Like the other Ras isoforms, K-Ras proteins are localized to the inner plasma membrane, bind GDP and GTP and possess an intrinsic GTPase activity. K-Ras is involved in different types of ligand-mediated signal transduction pathways and influences proliferation, differentiation, transformation, and apoptosis by relaying mitogenic and growth signals into the cytoplasm and the nucleolus. K-Ras (like other Ras and Rho GTPases) cycles between an inactive (GDP-bound) and active (GTP-bound) state, acting as a molecular switch for many different signaling cascades and cellular processes. Activation is mediated guanine nucleotide exchange factors (GEFs) which stimulate the exchange of GDP for GTP. GTP is 10-fold more abundant in the cytosol than GDP. To turn off GTPase signaling, GAPs enhance the intrinsic GTPase activity of K-Ras. GAPs are necessary because the intrinsic GTPase activity is rather weak and not sufficiently effective for signal transduction pathways where rapid inactivation is required. In a normal cell, GAPs help to keep most of K-Ras in an inactive GDP-bound state. 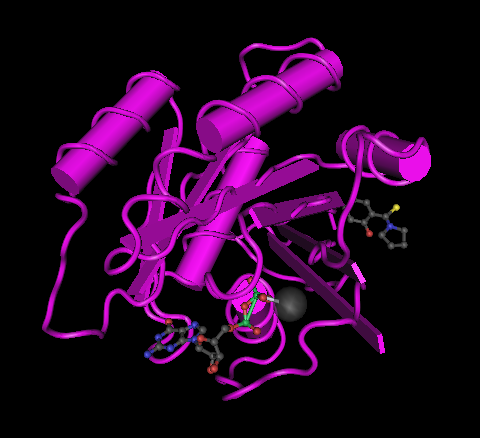 For more information on K-Ras, please see these citations and references: