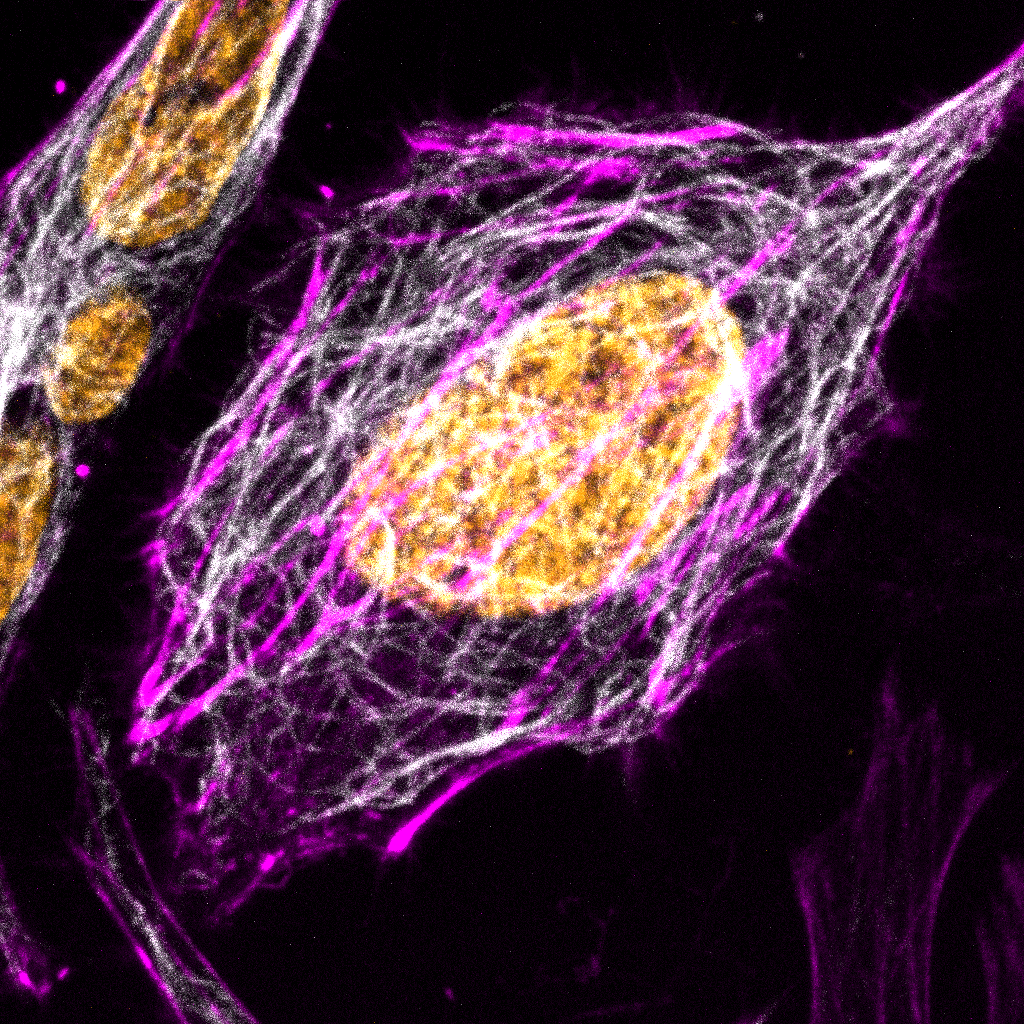 Newsletter 2/2/21:  A Live Look At Membrane Tension At The Plasma Membrane And Beyond

February Newsletter: A Live Look At Membrane Tension At The Plasma Membrane And Beyond 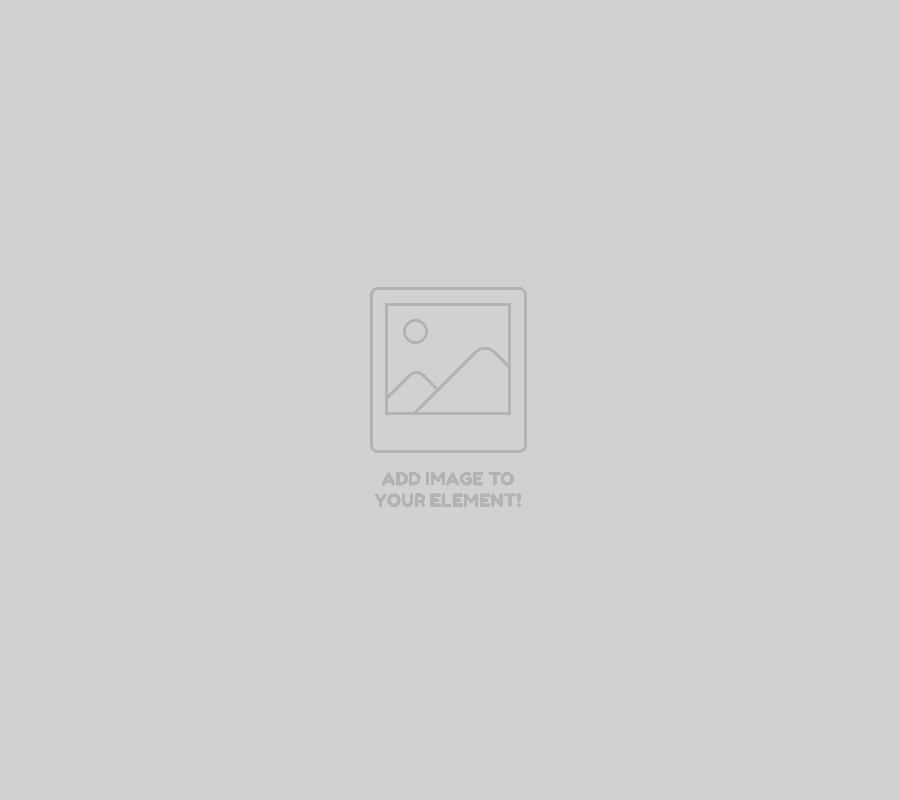 The plasma membrane (PM) is a lipid bilayer that has highly dynamic and fluidic structural properties. These characteristics are essential for cell processes like cell division, migration, and endocytosis. During these cellular processes targeted regions of the PM undergo directed movement which is often carried out by controlled forces from the underlying cytoskeletal network; additionally, mechanical tension, which is the energetic cost of increasing the membrane area, likely plays a role in many of these processes. Scientist’s understanding of membrane tension and the extent to which it controls the aforementioned processes remain incomplete in part due to the challenging and highly specialized techniques used to study it, which include atomic force microscopy and the use of optical tweezers to hold tubes/tethers of the PM(1). A novel planarizable push-pull probe (Figure 1A), Flipper TR, was recently developed, and when paired with Fluorescence-lifetime imaging microscopy it can efficiently measure lipid packing and membrane tension in a linear fashion(2). The following examples highlight how Flipper TR has been used to investigate the role of membrane tension in biological processes as well as in models of disease. 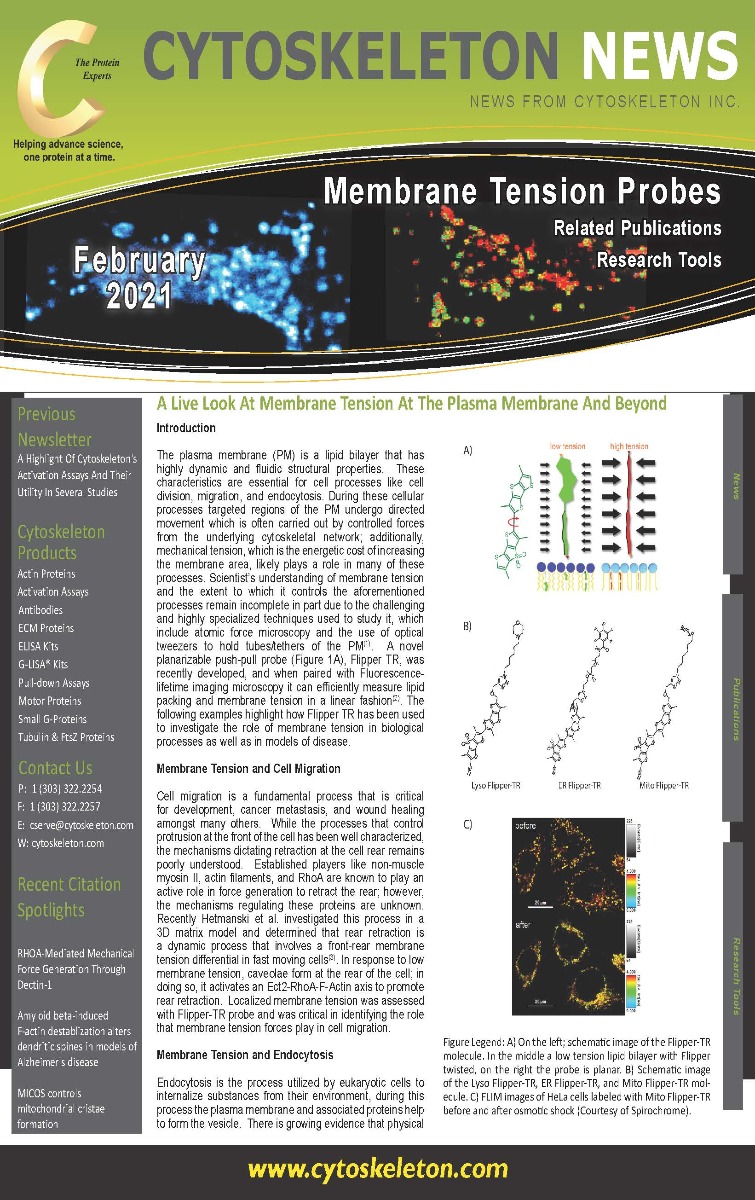 In eukaryotic cells the plasma membrane acts as an intercellular communication hub. In addition to the classic direct contact mechanisms of cell  communication  such as gap junctions, cell surface-protein interactions, and secreted peptides or hormones, cells are also known to communicate via reception of lipid encapsulated cellular biomolecules known as extracellular vesicles (EVs)1–3.  As the study of EVs has grown, so too has the delineation between the types of EVs. Apoptotic bodies are 500-2000 nm EVs that have bud off the membrane of apoptotic cells and are typically removed via macrophage phagocytosis. The 50-1000 nm microvesicles are smaller buds off the plasma membrane that deliver biological cargo to neighboring cells. Exosomes are 30-100 nm EVs that contain active biomolecule cargo but are distinguished from microvesicles based on their biogenesis. 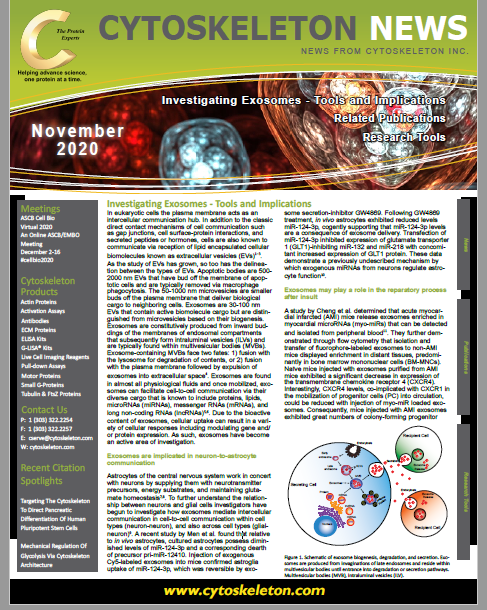 Cell division is a requisite task for all living things. A critical part of this process is the formation of the mitotic spindle which is the machinery that actively and effectively divides chromosomes into their respective daughter cells during mitosis.  The overall morphology of the mitotic spindle is well-defined with kinetochore microtubule bundles ( aka: kinectochore fibers) extending from the poles of centrosomes and attaching to specialized attachment sites on sister chromatids called kinetochores to achieve the processes that occur in metaphase and anaphase. Conversely, the molecular mechanisms regulating mitotic spindle function have been much more challenging to decipher for several reasons: 1. it is extremely large and complex, often comprised of hundreds to thousands of microtubules, 2. it is one of the most dynamic cytoskeletal structures, and 3. there are a multitude of microtubule associated proteins (MAPs) that participate in the formation and function of this structure(reviewed in (1, 2)).  Improved microtubule visualization tools will allow investigators to better understand the mechanisms that regulate mitotic spindle spatiotemporal organization, unique spindle forces, and spindle interaction with kinectochore complexes. 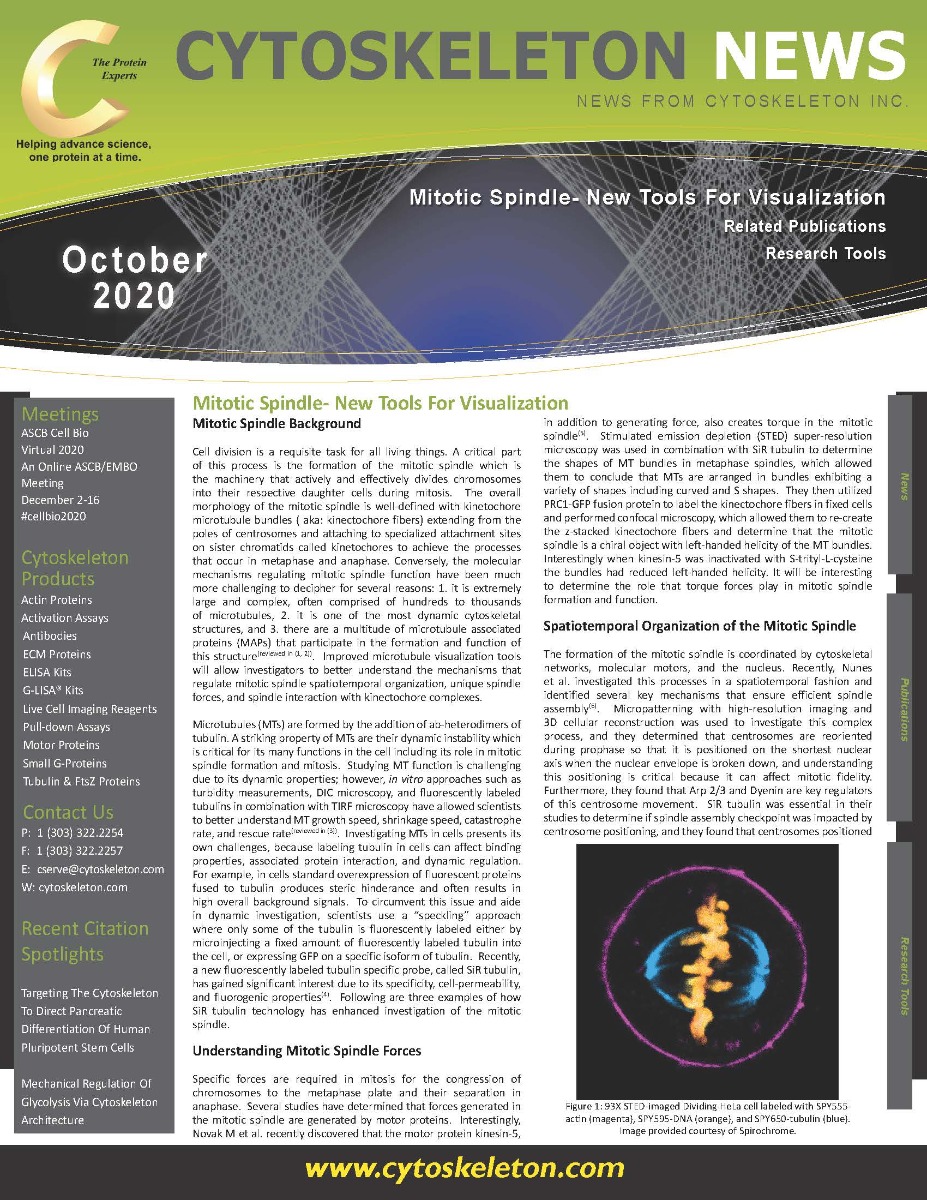 This newsletter describes the pros and cons of commonly used fluorescent membrane probes and provides an overview of the latest probe breakthroughs. Luminescent membrane probes delineate the periphery of a cell by binding close to or within the plasma membrane. There are, broadly speaking, five classes of membrane probes, which are; wheat germ agglutinin (WGA) conjugates, lipid conjugates, lipophilic dyes, covalent binding probes, and biophysical reporter probes. Recently, new fluorogenic probes have been developed including MemGlow™ (MemBright™ family), Flipper-TR5a and Nile Red-based probes, which bestow researchers unprecedented resolution of membrane structure and function, and with the latter  two acting as biophysical sensors. 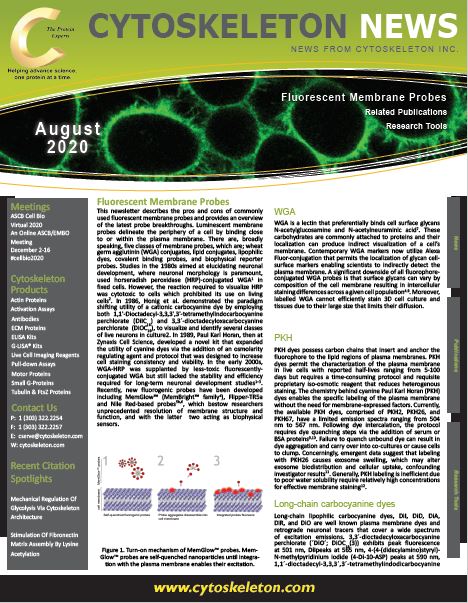 Dynamic remodeling of the actin cytoskeleton [i.e., rapid cycling between filamentous actin (F-actin) and monomer actin (G-actin)] is required for multiple physiological functions, including intracellular transport, cell growth, morphology, motility, trafficking, polarity, cell-to-cell contacts, and cytokinesis1,2. Correspondingly, dysfunctional actin cytoskeletal dynamics are a pathophysiological feature of many human diseases, including those with oncogenic, neurodegenerative, or cardiovascular origins3-9. For these reasons, there is continuing interest in F-actin live cell imaging probes to study actin cytoskeletal dynamics in cell culture models of health and disease. 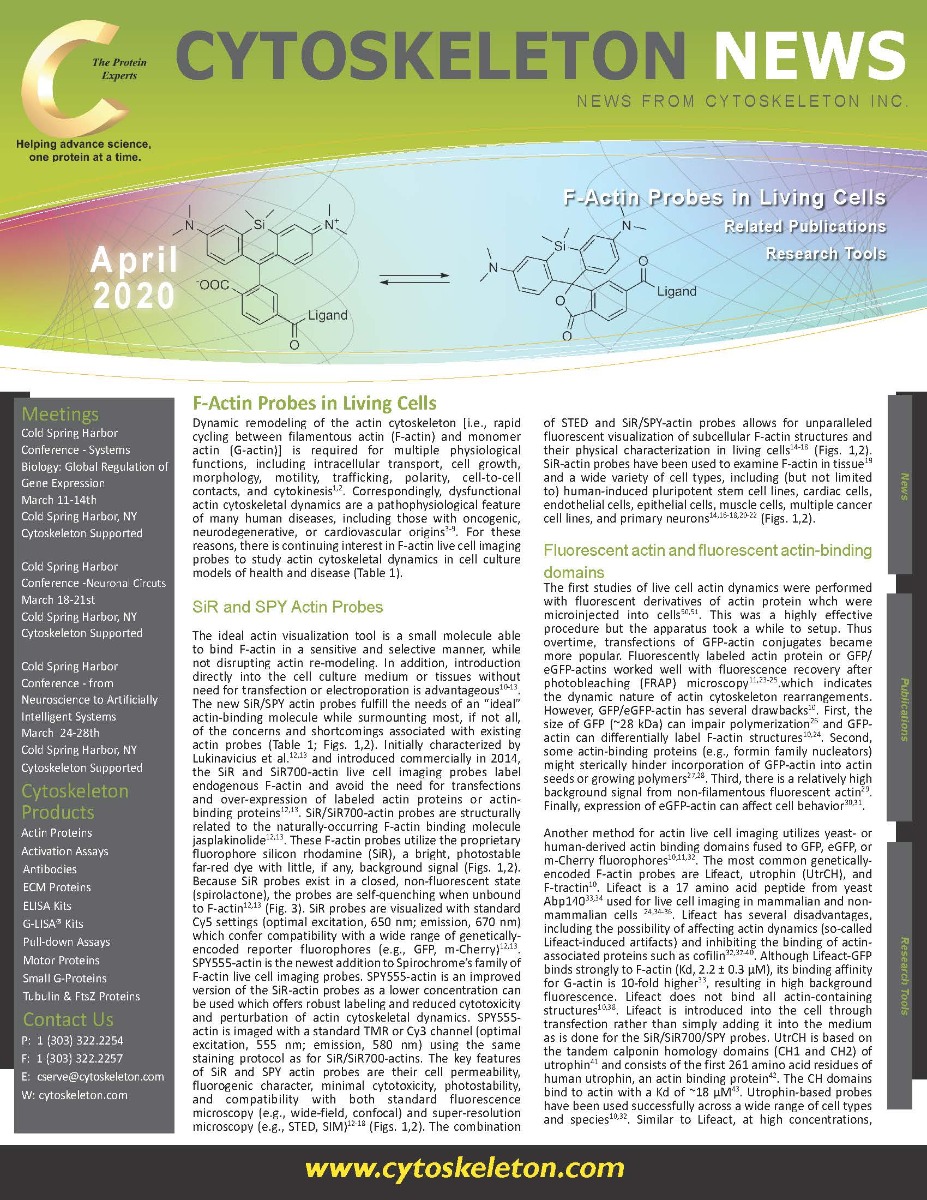 Plasma membrane tension regulates many cellular functions, including exocytosis, endocytosis, division, and motility1-6, all of which require a re-shaping of cellular morphology, which in turn relies upon an interplay between plasma membrane deformation and remodeling of the actin cytoskeleton1,3,5-9. This newsletter discusses coordinated interactions between the actin cytoskeleton and membrane tension during motility-associated morphogenesis. Directed cell motility requires dynamic re-organization of the actin cytoskeleton at the front and rear of the cell (leading edge and trailing edge, respectively) with actin-based lamellipodial protrusions extending and pulling the cell forward in parallel with retraction at the trailing edge via changes in adhesion sites and RhoA-mediated actomyosin contractility8,10,11. As actin-based protrusions push the leading edge of motile cells forward and there is contraction at the trailing edge, the plasma membrane is deformed, changing membrane tension. Directed motility relies upon a balance between actin cytoskeleton remodeling and changes in membrane tension due to deformation8 (Fig. 1). 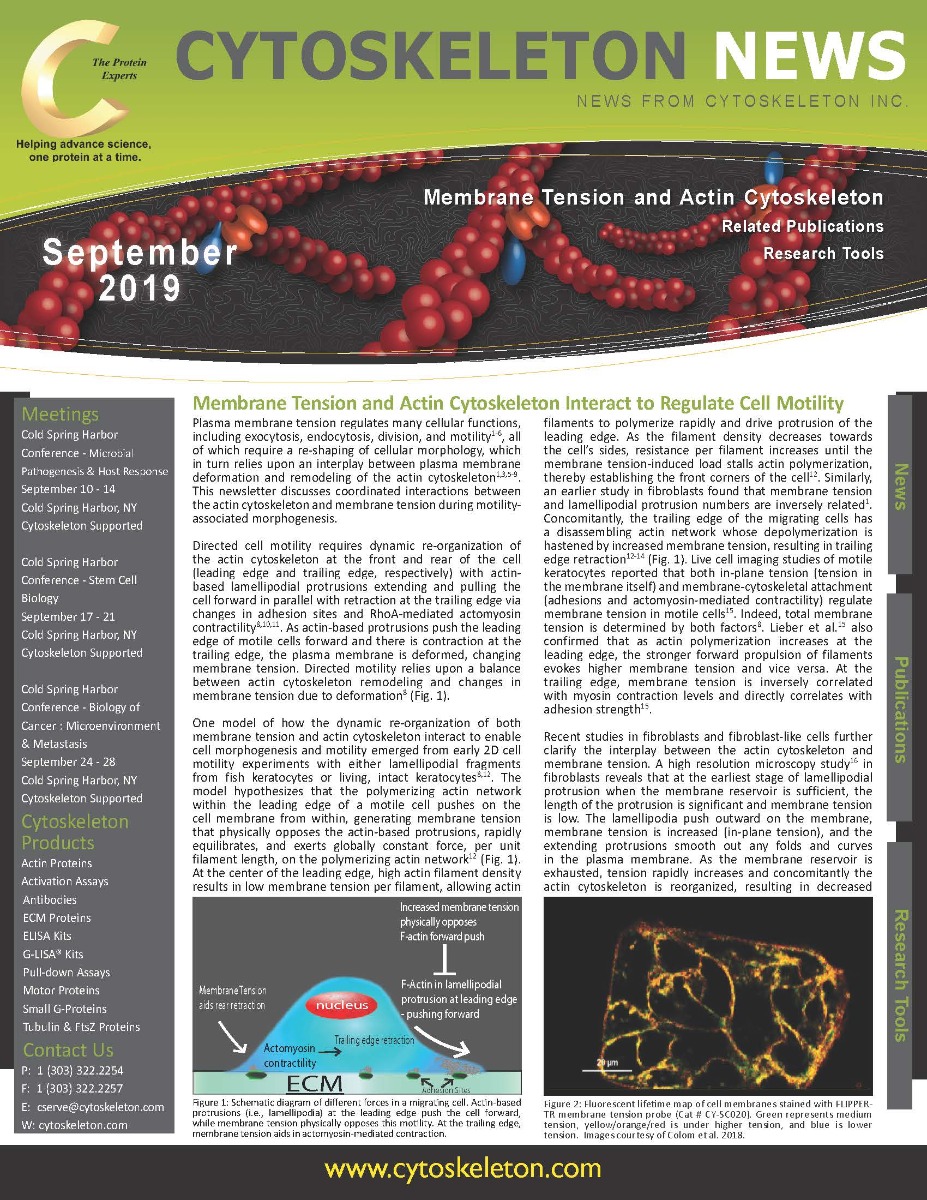 Studying the causes of human central nervous system (CNS) diseases and disorders and developing impactful therapies requires in vitro and in vivo disease models that faithfully recapitulate the respective neuropathophysiology while also supporting the neurons with the necessary cellular machinery to respond to therapies in a manner that offers translational results. Moreover, it is imperative to study the earliest neuropathophysiological changes as these provide the best opportunity for early diagnosis and intervention. Changes in the structure and/or function of neuronal synapses are often the earliest pathological changes in many neurodegenerative diseases and CNS disorders. To detect early synaptic dysfunction, scientists utilize live cell imaging which provides single cell resolution with real-time analysis of changing experimental conditions. This newsletter discusses the use of live cell imaging in in vitro and in vivo studies of CNS diseases and disorders. Actin is an integral part of the neuronal cytoskeleton as it is involved in the regulation of neuronal polarization, cell morphology, the development of neuronal processes (i.e., growth cones with lamellipodial and filopodial extensions and dendritic spines), intracellular trafficking, and synaptic plasticity (dynamic changes in dendritic spine number and/or morphology)1-3. Actin’s presence in growth cones and dendritic spines have garnered the attention of scientists for decades; however, actin is also found in neuronal axons, though its presence there has been described as the “black sheep of the neuronal actin family”4. This is because the exact details of actin’s structure and role in the axon are unknown. Recently, significant advances have been made in unraveling the structure of axonal actin with the discovery of the periodic membrane skeleton (PMS) by nanoscopic microscopy5 (Fig. 1). This newsletter discusses the discovery, structure, and possible functions of the PMS in axons.

Discovered in 2013, the PMS is a type of cortical actin and the primary component of the actin cortex, a mixture of F-actin and actin binding proteins which supports eukaryotic cells’ plasma membrane and membrane-associated processes such as endo- and exocytosis and cell motility4,5. In neuronal axons, including the initial segment6, the PMS consists of short actin filaments bundled into evenly spaced rings that wrap around the circumference of the axon with a periodicity of 180-190 nanometers5-9 (Fig. 1). The short filaments are stabilized by an adducin cap which controls the diameter of actin rings and axons, as well as actin filament growth within the rings6,10. Adjacent actin rings are secured through cross-linkage by spectrin tetramers (bII in the axon proper and bIV in the axon initial segment)6,8,11. 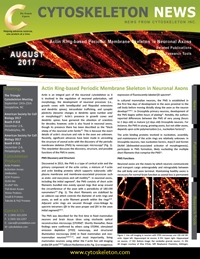 Recent advances in organic chemical synthesis have facilitated the ultimate aim of producing small cell-permeable compounds which can efficiently label the actin cytoskeleton and track its dynamic properties1-3. Traditional methods of visualizing F-actin in cells and tissues have relied on microinjection of pre-labeled actin protein4,5 (Fig. 1), fluorescently labeled phalloidin-like molecules6,7, or the use of genetic constructs encoding for either GFP-actin8,9 or GFP-actin binding protein peptides10-12. Clearly the process of labeling actin with a fluorophore (e.g., rhodamine) and setting up a microinjection apparatus is a time-consuming process, but it can be efficient if the labeled actin is purchased and the microinjection system is available in a core facility or neighboring laboratory. This technique is particularly suited either to large cell types such as 1 mm diameter Xenopus oocytes which allow relatively simple injection methods to be developed, or to cell types that are sensitive to transfection reagents or recalcitrant to uptake of the newly developed Spirochrome™ reagents1-3 (Fig. 2). 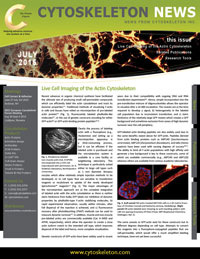 Lysine acetylation is a post-translational modification (PTM) crucial for regulating the function and localization of many eukaryotic proteins.  This PTM is reversible, regulated by histone deacetylases (HDACs) and histone acetyltransferases (HATs). The first evidence of lysine acetylation was discovered in calf thymus histones in 19681.  In the following decades, non-histone proteins such as high mobility group protein 1, alpha-tubulin, and tumor suppressor P53 were shown to be lysine acetylated2-4. With the development of pan-acetyl-lysine antibodies and their use in mass spectrometry analyses, large scale proteomic studies of lysine acetylation sites revealed a previously unappreciated number of acetylated proteins. The first of such studies described 37 acetylated proteins in the cytoplasmic fraction of Hela cells and 133 in mouse liver mitochondria5. In a more recent study using rat tissues, 15,474 modification sites on 4,541 proteins were identified6.  This study revealed that the majority of lysine-acetylated proteins localize to the cytoplasm (30%) and nucleus (30%), with the remainder found in mitochondria (15%), plasma membrane (15%), endoplasmic reticulum or Golgi apparatus (5%), and extracellular region (5%)6. Here we will highlight examples of lysine acetylation regulating cellular processes. Lysine acetylation plays a crucial role in the regulation of cytoskeleton-associated proteins (e.g., actin, tubulin, small GTPases). Stress fibers, composed of beta- and gamma-actin, are important for cell shape and movement. In muscle cells, alpha-actin constitutes the microfilaments and together with myosin assures the traction forces required for muscle contraction and also for cytoplasmic streaming in non-muscle cells. All three actin isoforms can be acetylated5,7. 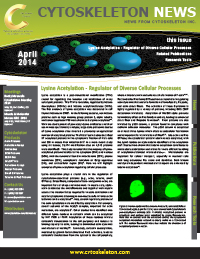 Idiopathic Pulmonary Fibrosis (IPF) afflicts five million people worldwide with a median survival rate of 3-5 years1,2,3. This fibrotic disease is considered a chronic inflammatory tissue-repair response and is characterized by an excessive deposition of connective tissues that leads to failure in organ structure and function4. Fibronectin (FN) fibrillogenesis, a cell-mediated process that converts soluble plasma FN into insoluble FN, plays a central role in the development of this disease5. FN is a glycoprotein secreted as a dimer connected by two C-terminal disulfide bonds. It is comprised of multiple functional domains including the N-terminal 70 kDa domain, the 120 kDa central binding domain, and the heparin-binding domain HepII4. These domains interact with cell-surface receptors in a stepwise process that initially involves binding to integrin and heparin sulfate proteoglycan (HSPG) cell-surface receptors (see Fig. 1)4. This binding triggers actin cytoskeleton reorganization which generates cell tension, leading to clustering and translocation of the FN-bound receptors which unfolds the compact FN dimer into an extended structure that exposes binding sites for FN-FN interactions4. Although fibrillogenesis can lead to misregulated fibrosis and has been linked to several diseases including IPF and malignant, unchecked tissue growth4,6, the insoluble cellular FN also plays a major role in cell adhesion, growth, migration, and differentiation which are important for restorative and developmental processes such as the deposition of connective tissue4,7, wound healing, and embryonic development7. 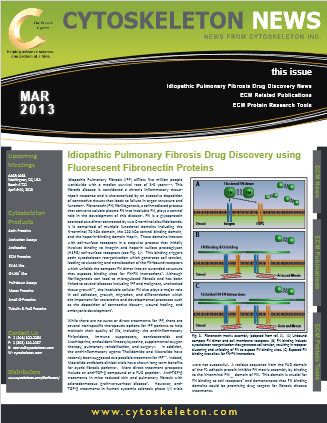