Microtubules, composed of alpha- and beta-tubulin heterodimers, are one of the most recognizable filamentous structural proteins in the dynamic cytoskeleton network. Its function in mitosis and cell division is integral to growth and viability, but its essential role in intracellular organization during interphase is just as important. One core function is its role in cargo transport where microtubule networks have been compared to highways and byways utilized by motor proteins to transport cargo such as vesicles, organelles, protein complexes and many other cell components (1). So what’s new in the world of microtube/motor-driven cargo transport and what’s regulating it? Exciting new research is adding to our understanding of the dynamic microtubule/motor cargo system and its effect on disease.

When cardiomyocytes are exposed to mechanical or neurohumoral stimuli they activate signaling cascades that upregulate transcription and translation of new sarcomeres to promote hypertrophy. Recent studies suggest that mRNA and ribosomes localize to distinct regions in response to stimuli to promote local sarcomere synthesis(2). Scarborough et al. found that microtubules regulate mRNA and ribosome cargo localization to control local translation and dictate cardiac growth (3). When mice or neonatal rat ventricular myocytes (NRVMs) were exposed to stimulus like phenylephrine (PE) they underwent hypertrophy as expected; this growth could be inhibited with microtubule disrupting drugs like colchicine or nocodazole supporting previous findings that the microtubule system plays an important role in cardiac hypertrophy. Unexpectedly, when the group evaluated changes in the cardiac hypertrophic genes in PE treated NRVMs they found that in the absence or presence of colchicine they saw a similar elevation of these genes. The group determined that the microtubule/motor cargo delivery system was essential to localize mRNA and ribosomes to the correct location for effective translation of sarcomere forming proteins. When proper microtubule function was blocked with microtubule disrupting drugs, mRNAs and ribosomes collapsed around the nucleus leading to rapid protein degradation and suppressed hypertrophy. These data suggest that proper localization of the translation machinery and not just translation levels are critically important for cardiac hypertrophy, and the microtubules/motor-driven cargo delivery system are important players in this process 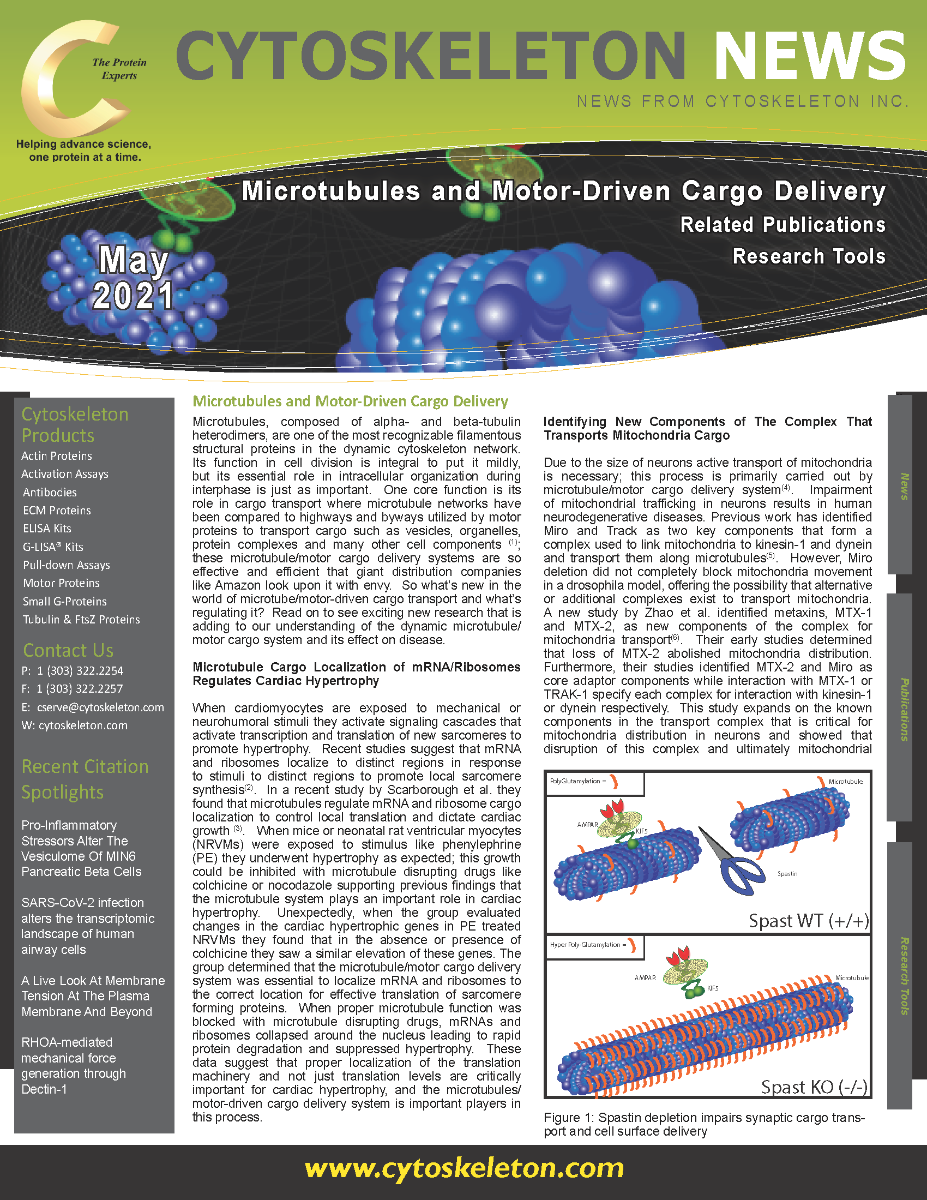 Identifying New Components of The Complex That Transports Mitochondria Cargo

Due to the size of neurons active transport of mitochondria is necessary; this process is primarily carried out by the microtubule/motor cargo delivery system(4). Impairment of mitochondrial trafficking in neurons results in human neurodegenerative diseases. Previous work has identified Miro and Track as two key components that form a complex used to link mitochondria to kinesin-1 and dynein and transport them in both directions along microtubules(5). However, Miro deletion did not completely block mitochondria movement in a drosophila model, offering the possibility that alternative or additional complexes exist to transport mitochondria. A new study by Zhao et al. identified metaxins, MTX-1 and MTX-2, as new components of the complex for mitochondria transport(6). Their early studies determined that loss of MTX-2 abolished mitochondria distribution. Furthermore, their studies identified MTX-2 and Miro as core adaptor components while interaction with MTX-1 or TRAK-1 specify each complex for interaction with kinesin-1 or dynein respectively. This study identified novel adapter proteins in the transport complex that is critical for mitochondria distribution in neurons and showed that disruption of this complex and ultimately mitochondrial transport resulted in dendrite degradation. Importnantly the group identified unique complexes that mediated cargo interaction with specific motors which adds to our understanding of the regulatory mechanisms of the microtubule/motor cargo delivery system.

Mutations in spastin, a microtubule severing protein, is the primary cause of hereditary spastic paraplegia (HSP)(7). Mutations in kinesin family protein (KIF) 5 has also been linked to HSP. Complicated forms of HSP are associated with neurologic impairments and late-onset dementia(8). New findings by Lopes et al. used a spastin knockout mouse to investigate the causes of neurologic deficits identified in complicated HSP; as expected, altered microtubules were observed and played a critical role in a reduction of synapses (in the range of 40%), a measure of neurological dysfunction(9). Neurons from these knockout mice had movement rate defects in microtubule/motor-driven transport of AMPA receptors and had less KIF 5 associated with these microtubules. Additionally, they identified enhanced polyglutamylation in neurons where spastin was knocked out (see figure 1). A link between Spastin function and polyglutamylation on the C-terminal tails of tubulin has been linked previously(10). To define the importance of enhanced polyglutamylation, Lopes et al. utilized shRNA tools to deplete polyglutamylase subunit 1 (PGs1), which catalyzes 80% of the polyglutamylation of neuronal tubulin. Depletion of PGs1 was sufficient to reverse the enhanced polyglutamylation observed in spastin knockout neurons; more importantly, it also restored normal KIF5 interaction, neuronal transport, and synapse numbers. These findings suggests that post-translational modifications (PTMs) that occur on microtubules can have a profound effect on microtubule/motor cargo delivery system, and it will be interesting to further define the interplay between tubulin PTMs and motors.

These findings highlight how important proper regulation of the microtubule/motor cargo delivery system is for downstream process that regulate pathologic outcomes like cardiac hypertrophy and neurodegeneration. As our understanding of these biological consequences are uncovered, it will be even more important to identify key players in the transport complexes that may be targets for intervention as a mechanism to properly control this process. It will be important to understand how proteins that regulate the dynamicity and PTM state of tubulin also impact cargo movement and delivery along these microtubule tracks. What an exciting time to be investigating tubulin regulated cargo delivery and Cytoskeleton Inc. is proud to assist researchers with essential tubulin tools to aide in their investigation.