General Overview of Lysine Acetylation in Health and Disease

Acetylation of the epsilon amino group of lysine residues (Nε-acetylation) is an ancient, highly conserved post-translational modification (PTM)1,2 that links acetyl coenzyme A (acetyl-CoA) metabolism and cellular signaling. This occurs largely through the opposing activities of lysine acetyl transferases (KATs) and lysine deacetylases (KDACs)3. In humans, there are 3 major KAT families (GCN5, CBP/p300, and MYST) that all use acetyl-CoA as an essential cofactor to donate an acetyl group to target lysine residues. There are two KDAC families, the zinc-dependent histone deacetylases (HDAC1-11) and the NAD+-dependent sirtuins (SIRT1-7)1-3.

It is well documented that acetylation of nuclear histones plays a major role in regulating chromatin compaction and transcriptional activity wherein acetylation favors a more open, transcriptionally active chromatin1. Recent proteomic studies have identified over 4,500 non-histone proteins as targets of acetylation, thereby establishing lysine acetylation as a major global PTM. This PTM is present in many, if not all, cellular compartments, including the nucleus, cytoplasm, cell membrane, and mitochondria4. Functionally, reversible lysine acetylation has been shown to regulate enzyme activity4-6, protein-protein interactions7, and protein localization and stability8,9. In addition, it plays critical regulatory roles in many cellular processes, including gene expression, cellular metabolism, apoptosis, cytoskeleton regulation, and membrane trafficking10.

In 2006, Vorinostat became the first FDA approved drug targeting histone epigenetics through HDAC inhibition for the treatment of cutaneous T-cell lymphomas (CTLC)11. There are now four FDA approved HDAC inhibitors for the treatment of CTLC, peripheral T-cell lymphoma, and multiple myeloma12, which clearly demonstrates the potential of targeting lysine acetylation for therapeutic intervention. Clinical success, coupled to the vast expansion in identification of non-histone acetyl lysine targeted proteins, has enhanced interest in exploring the regulatory functions and therapeutic potential of this PTM beyond epigenetics. The remainder of this Newsletter focuses on lysine acetylation in the mitochondria and its possible value as a therapeutic target.

Lysine acetylation is abundant in mitochondria, with an estimated 700 proteins (63%) undergoing this modification, three fold higher than phospho-modifications in this organelle13. Elucidating the mechanisms that regulate mitochondrial acetylation and identifying potential therapeutic targets is a new and rapidly growing area of investigation10. In recent years, some general concepts have begun to emerge which are briefly outlined below: 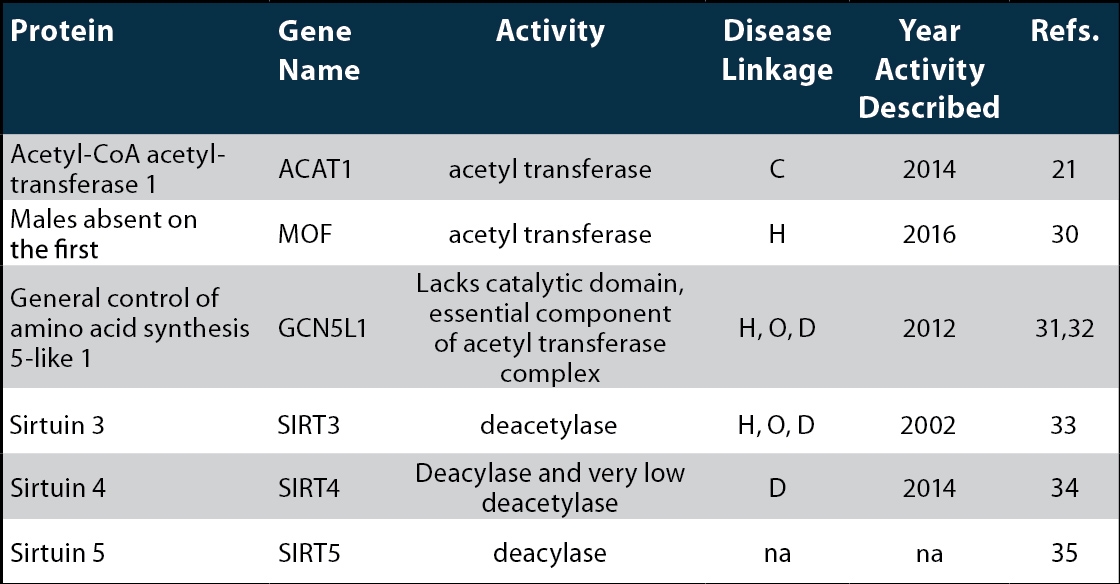 Therapeutic exploitation of the mammalian mitochondrial acetylome offers great potential for the treatment of human disease; however, it is clear that much is still to be learned about the basic biology of this PTM beyond epigenetics. The role of lysine acetylation in the cytoplasm, plasma membrane, and other cellular compartments is also an area of high interest. In this regard, the development of an expanded toolset to aid in this research is urgently needed.