Rho-family GTPases (e.g., RhoA, Rac1, Cdc42, and RhoJ) act as molecular switches, cycling between a GTP-bound “on” state and a GDP-bound “off” state. Activation is mediated by guanine nucleotide exchange factors (GEFs) and intrinsic GTPase activity is amplified/activated by GTP-activating proteins (GAPs). Rho-family GTPases regulate the dynamic assembly and disassembly of actin filaments which are necessary for the formation, extension, withdrawal, and disassembly of the cellular protrusions (i.e., filopodia and lamellipodia; regulated by Rac and Cdc42, respectively) at the front of the cell and of contractile actomyosin fibers (regulated by RhoA) at the rear of the cell1-8 (Fig. 1). Interestingly, recent research clearly demonstrates that RhoA is also active at the leading edge1,9-12. Of particular interest is how these GTPases regulate cell migration and force generation through the dynamic re-organization of the actin cytoskeleton1-3,13,14 (Fig. 1). This newsletter discusses the roles of Rho-family GTPases in establishing and regulating cell-ECM adhesions and cellular directionality during cell migration.

Figure 1. Role of Rho-family GTPases in cell-ECM adhesion and cell migration. Cells can migrate in a lamellipodium-based manner with Rho-family-mediated actin polymerization driving formation of lamellipodia (Rac) and filopodia (Cdc42) at the leading edge, and Rac-mediated actomyosin contractility promoting retraction at the trailing edge. Cdc42 mediates protrusion of actin-enriched invadopodia into the ECM via matrix metalloprotease (MMP)-mediated matrix degradation.

Elimination of RhoA signaling prevents F-actin stress fiber formation; this finding introduced the importance of Rho-family GTPases in the regulation of interactions (i.e., focal adhesions) between cells and the ECM1,7. Activated RhoJ (a member of the Rho family and related to Cdc42) GTPase localizes to integrin-containing focal adhesions where it regulates their disassembly. GTP-bound RhoJ recruits a multi-protein complex consisting of the Rac GEF β-Pix and Arf GAPs GIT1/2 to focal adhesions, promoting Rac1 and Cdc42 activation while prohibiting RhoA activation15,16. The result of these trafficking events is focal adhesion disassembly and increased motility, concomitant with decreased RhoA activity and actomyosin contractility7,15-17. An indirect means of communication between focal adhesions (specifically the integrins within) and Rho-family GTPases is through the ECM. For example, Cdc42, but not Rac1, activation triggers deposition of the ECM protein fibronectin which supports nascent lamellipodia formation. The fibronectin binds to integrin and serves as an ECM substrate for Rac1-dependent directional migration18.

Rho-family-mediated remodeling of the actin cytoskeleton is necessary for the cell’s directional response to extracellular guidance cues (e.g., chemokines, matrix-released molecules, growth factors, etc). The response is either a migration toward or away from environmental cues and this directional response requires dynamic reorganization of the actin cytoskeleton. A central question is the identity of the signaling molecule (or molecules) that relays the extracellular information to the actin cytoskeleton1-4. The dogma has been PI3 kinase, however this hypothesis has been called into question19-24. A new family of candidates has emerged – Rho-family GTPases1. For example, Rac1 activity at the leading edge of Drosophila border cells migrating collectively is necessary for stable, organized forward movement and Rac1-mediated forward protrusions are increased as part of a E-cadherin-mediated positive feedback loop when E-cadherin mechanically transduces guidance cues25. Rac also regulates migration of fibroblasts26. During in vitro E-cadherin-mediated mechanotransduction in migrating mouse C2C12 myoblasts, the adhesion molecule activates Cdc42 in the leading edges of migrating cells. Cdc42 is required for E-cadherin-directed cell migration and mechanical force generation27. Furthermore, Cdc42 also directs neutrophil migration as it is activated prior to the cell’s response to environmental cues, while acting in concert with Rac activation, which likely powers the cellular movement through widespread remodeling of the cell’s actin cytoskeleton. Cdc42 activation also inhibits RhoA activity, suggesting that the two GTPases work in opposition during directed migration24.

Despite the tremendous strides in understanding the role of Rho-family GTPases in cell-ECM adhesions and cell migration, many questions remain unanswered. A majority of the cell culture data comes from 2D cultures which now must be confirmed in 3D cell culture models. This is especially relevant when studying the role of Rho-family GTPases in cell-ECM (and cell-cell) interactions as these signaling cascades regulate not only basic physiological pathways, but are corrupted in human pathological conditions. Importantly, Rho-family GTPases are likely to have different roles (or at least proportionally different contributions) to cell-ECM adhesions and migratory behavior depending on cell type or context (or even cancer type in disease models). Of paramount importance is also the identification of all Rho-family GTPase binding partners and an emphasis on studying the signaling cascades at a systems level that integrates incoming intrinsic and extrinsic signaling to the cell and the cell’s response. To assist scientists in unraveling how Rho-family GTPases regulate cell adhesion and migration, Cytoskeleton, Inc. offers a variety of GTPase activation assays, antibodies, Signal Seeker kits to study post-translational modifications, live cell imaging probes for F-actin, and cytoskeletal (GTPases, actin, and tubulin) signal transduction reagents and functional assays 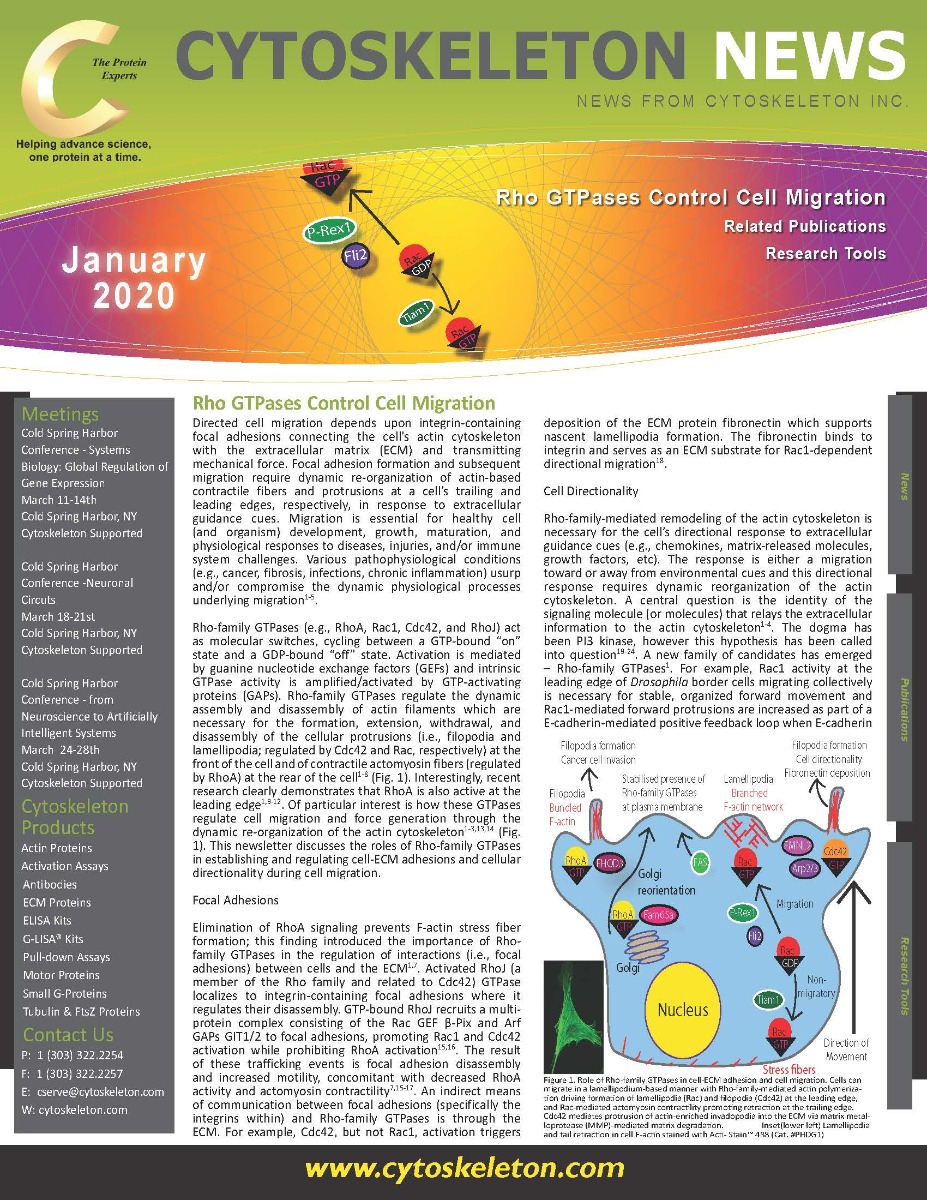