Ubiquitin-Proteasome System as a Therapeutic Target: Does Tubulin Care?

The ubiquitin-proteasome system (UPS) is a well-characterized protein degradation system in cells whose dysfunction is implicated in many diseases, including neurodegeneration and cancer1,2. Major UPS components are ubiquitin (Ub), Ub ligases, Ub hydrolases (deubiquitinases [DUBs]), and the proteasome. Activation of the UPS begins with attachment of an 8 kDa ubiquitin protein to a target protein by a three step cascade carried out by Ub ligases. Ub itself can be ubiquitinated, leading to poly-ubiquitination, a marker for proteasomal recognition and ultimately degradation (Fig. 1). This is an oversimplification as there are several unique Ub specific chains, as well as mono-ubiquitination, that can regulate multiple facets of a protein’s function1-3. Due to the prevalence of UPS dysfunction in disease and an increased molecular understanding of how ubiquitination degrades protein, interest in targeting the UPS for therapeutic intervention has grown substantially.

Given the proteasome’s role in regulated degradation of poly-ubiquitinated proteins and its dysfunction in cancer, researchers posited that inhibition of the proteasome may be effective for treating cancer cachexia (wasting syndrome)4. This hypothesis spurred the development of early proteasome inhibitors like MG-1325. MG-132’s pharmacological properties precluded its use clinically; however, it launched the proteasome inhibitor drug discovery field that resulted in the development of the only UPS-based drugs approved by the FDA: bortezomib (BTZ) and carfilzomib. These drugs showed little effect on solid tumors but significantly decreased disease progression in patients with multiple myeloma (MM)6,7. 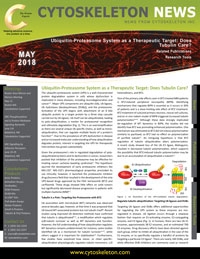 Tubulin is a Pain: Targeting the Proteasome with BTZ

Ub association with microtubule (MT) networks was observed several decades ago; however, at that time it was proposed that Ub bound MT-associated proteins but not tubulin itself8. Recent studies using improved Ub detection methods have confirmed that tubulin is ubiquitinated9-11, a modification which regulates α/β-tubulin turnover as well as MT dynamics and function. However, the full understanding of how ubiquitination regulates MT dynamics remains undetermined; for instance, some studies identified Ub as a mechanism for tubulin turnover11,12, while others suggest it is important for stabilization13. Furthermore, few studies have examined how mono- or chain specific-ubiquitination physiologically regulates tubulin monomers, a/b heterodimers, and MTs.

Figure 1. An illustration of the UPS-mediated tubulin degradation.

Targeting Ub ligases and DUBs offers additional opportunities for regulating the UPS system as these enzymes are mis-regulated in disease. Ub ligation occurs through a stepwise fashion that requires an E1-activating enzyme, E2-conjugating enzyme, and E3 ligase (Fig. 1). In humans, there are two Ub E1 enzymes, approximately 38 E2 enzymes, and an estimated 700 E3 enzymes. Drug discovery efforts have been directed against each group, either to inhibit all ubiquitination in the case of the E1 enzyme, or to specifically regulate a handful of proteins by targeting a particular E3 ligase2. There are nearly 100 DUBs, and while effective DUB inhibitors are commonly used as research tools, none are being tested clinically18. Thus far, it has been challenging to develop effective Ub inhibitor drugs because many of the Ub-regulating proteins are not good targets for small molecules. Nonetheless, identifying specific drugs against Ub ligases or DUBs may be beneficial as it may provide enhanced specificity compared to proteasome inhibitors; additionally, it may lead to stabilization/accumulation of proteins without the Ub tag attached, which may be beneficial when trying to prevent degradation of a target protein (e.g., a tumor suppressor protein)19.

a/b-tubulin heterodimers are the target of various Ub ligases, including Parkin (a/b-tubulin), ubiquitin C-terminal hydrolase L1 UCHL1 (a/b-tubulin), and Mahogunin (a-tubulin)11-13 (Fig. 1). Parkin is particularly interesting as it is a gene commonly mutated in Parkinson’s disease (PD)12 and also regulates mitochondrial quality control through Ub-dependent mechanisms20. Wild-type Parkin regulates a- and b-tubulin ubiquitination, associates very tightly with MTs and a/b heterodimers, and promotes proteasomal-mediated degradation of toxic tubulin monomers12. Conversely, Parkin mutants found in PD patients fail to ubiquitinate tubulin and do not promote its degradation12. Similarly, poly-ubiquitination of b-tubulin is prevented through its binding with an analog of the endogenous neurotoxin 1BnTIQ, which is present in patients with PD10, potentially leading to toxic build-up of tubulin monomers. Other Ub ligases such as the breast and ovarian cancer susceptibility protein 1 (BRCA1) and Cullin 4A and 4B regulate g-tubulin ubiquitination, which is important for MT nucleation21,22. Recently, the DUB, BAP1, was shown to regulate g-tubulin ubiquitination and MT-regulated mitotic abnormalities23.

Despite the challenges in developing effective UPS drugs (e.g., non-specificity, as demonstrated by the BiPN side effect), the biopharma industry remains committed to this goal due to UPS’s significant role in human health and disease. As this newsletter illustrates, more specific drug targets within the UPS are required, and this specificity may reside with Ub ligases or DUBs. While identification of Ub ligases and DUBs that regulate tubulin (a likely target of non-specific effects) is in its infancy, currently identified Ub ligases such as Parkin, UCH-L1, and BRCA1 do critically regulate cell processes and disease pathologies and will undoubtedly be investigated as therapeutic targets. Cytoskeleton’s Signal-Seeker™ Ubiquitination Detection Kit is an essential research tool as scientists evaluate different UPS inhibitors and identify and measure endogenous levels of ubiquitinated proteins (both specific and non-specific drug targets).