We have recently developed two mouse monoclonal anti-acetyl-lysine (Ac-K) antibodies that have demonstrated excellent ability in visualizing acetylated proteins. The antibodies were raised against a proprietary mixture of acetylated proteins designed to optimize acetyl-lysine recognition for a wide range of sequence motifs. Data presented here show that both 7B5A1 (AAC02) and 19C4B2.1 (AAC03) provide robust staining of acetylated proteins by IF, which was highly specific for Ac-K detection as Ac-BSA competition inhibited all staining by either antibody. AAC03 produced the conventional Ac-K detection pattern, while AAC02 detected acetylated mitochondrial proteins by IF, which is unique relative to other commercial reagents. AAC02 IF staining co-localized with Mitotracker, but not lysosomal marker (Lamp-1), and were responsive to stimulants that are known to alter the mitochondria state. In immunoblot experiment, AAC02 detected multiple acetylated proteins in mitochondrial extracts. To further validate these findings mitochondrial target proteins were enriched and detected using these new Ac-K detection tools. AAC02 provides researchers with a unique avenue for studying acetylation in the mitochondria, and both antibodies are essential IF tools for investigating protein acetylation. 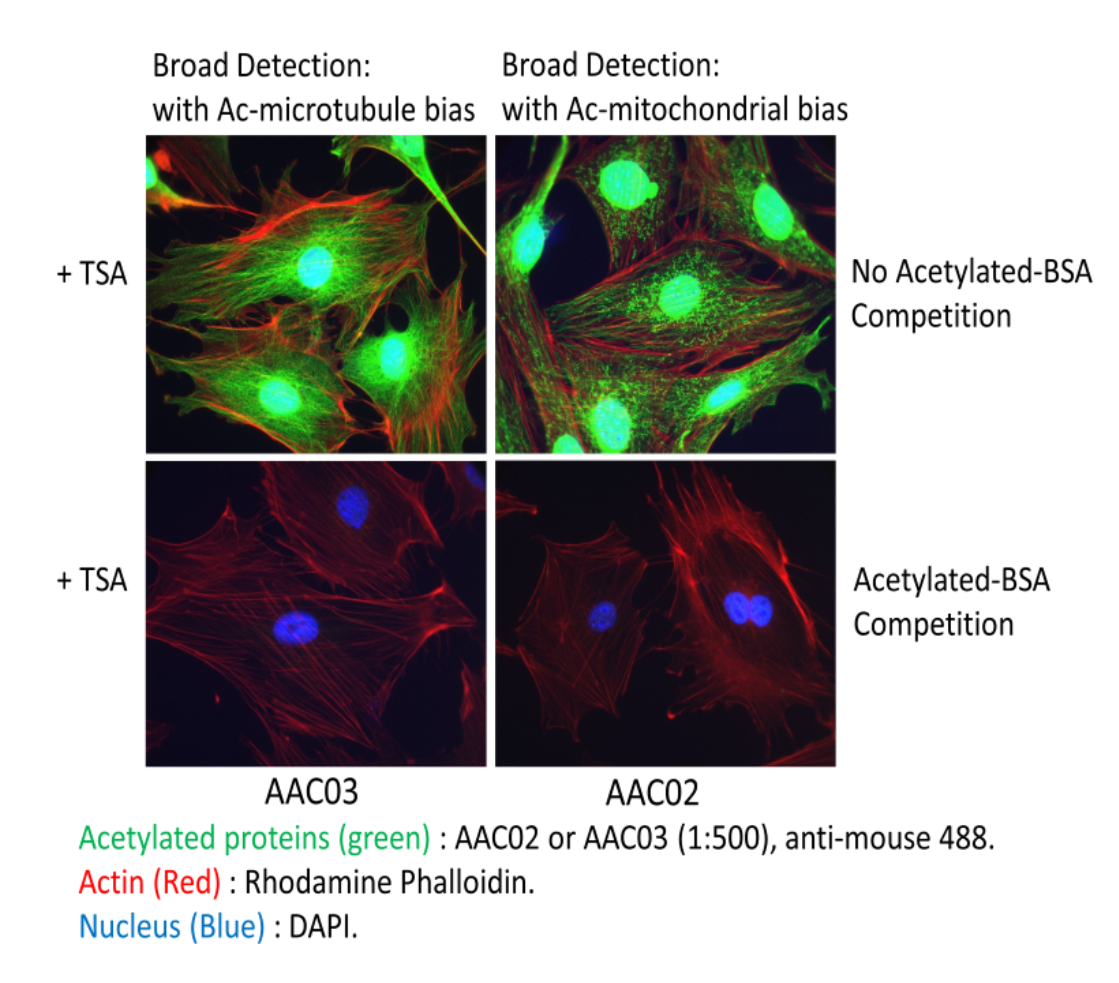 Figure 1 Legend:  Swiss 3T3 cells were treated with TSA (1 mM for 6 h) and stained as described in the methods. Acetylated proteins were visualized using a green fluorescent secondary. Actin fibers were visualized using a red Rhodamine Phalloidin and the nucleus was stained with DAPI. The acetylated microtubule network is clearly visible with TSA-treatment, while the green fluorescent nuclear intensity indicate the high abundance of acetylated proteins in the nucleus. Acetylated BSA (10mg/ml) was used to  compete for AAC02 binding as an indicator of AAC02 specificity for acetyl-lysine modifications.

Lysine acetylation is a critical post-translational modification that has been shown to play a fundamental role in epigenetic histone regulation1.  Recent acetylome studies indicate that acetyl-lysine regulation expands well beyond histones, and can target thousands of proteins and many different cellular processes. Many of these acetylome studies often link changes in global acetylation to disease progression2. Of interest, changes in acetylated microtubule and mitochondrial protein profiles are linked to many disease pathologies3,4.  In particular, hyperacetylation of mitochondrial proteins appear to be a critical marker of metabolic disease5. Thus, having tools to quickly access the acetylated mitochondrial state may be beneficial for more effective investigation, diagnosis, and/or treatment of these diseases. Here, we present immunofluorescence (IF) validation data for two newly developed Ac-K antibodies AAC02 and AAC03, and their usefulness in visualizing acetylated proteins in general with a bias for mitochondrial and microtubule proteins. 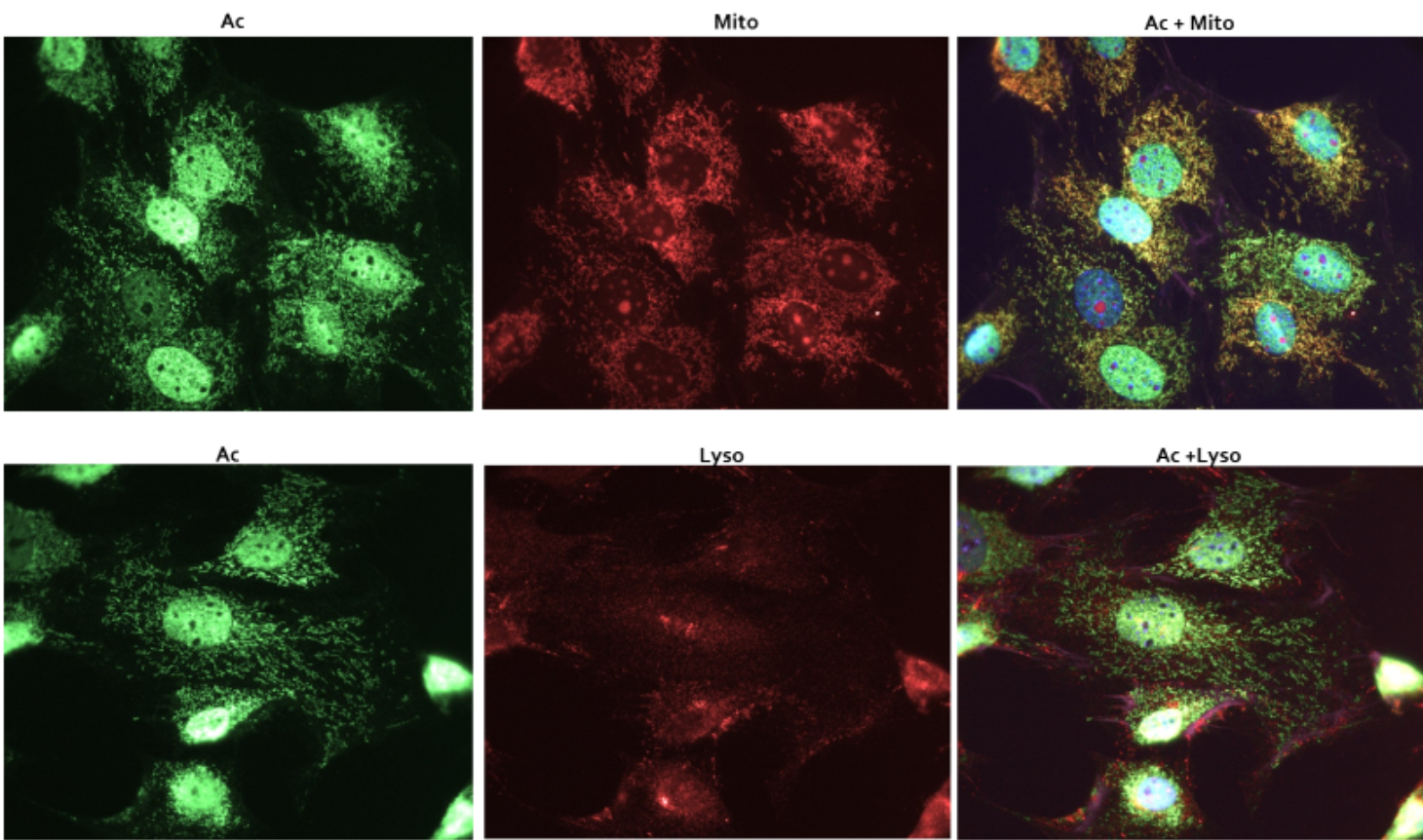 AAC02 and AAC03 Ac-K antibodies, were recently validated for a variety of applications such as western blot and immunoprecipitation, and was shown to out perform other commercial reagents (see anti-acetyl-lysine antibodies white paper). Here, the ability of these antibodies to effectively bind acetylated proteins in an IF format was investigated. Figure 1 shows the detection of acetylated proteins by IF from 3T3 cells treated with 1mM TSA.

Both anti-Ac-K antibodies detect acetylated histones in response to TSA; however, AAC03 had robust acetylated microtubule detection, while AAC02 had weaker microtubule detection with distinct punctate vesicular like staining (Figure 1).  To determine if AAC02 and AAC03 specifically bound Ac-K, the IF was performed in the presence of acetylated-BSA.  The addition of high levels of Ac-BSA was intended to compete for anti-Ac-K antibody binding.  Figure 1 provides evidence that in the presence of acetylated-BSA no Ac-K staining occurs, which suggests that AAC02 and AAC03 specifically binds to Ac-K. 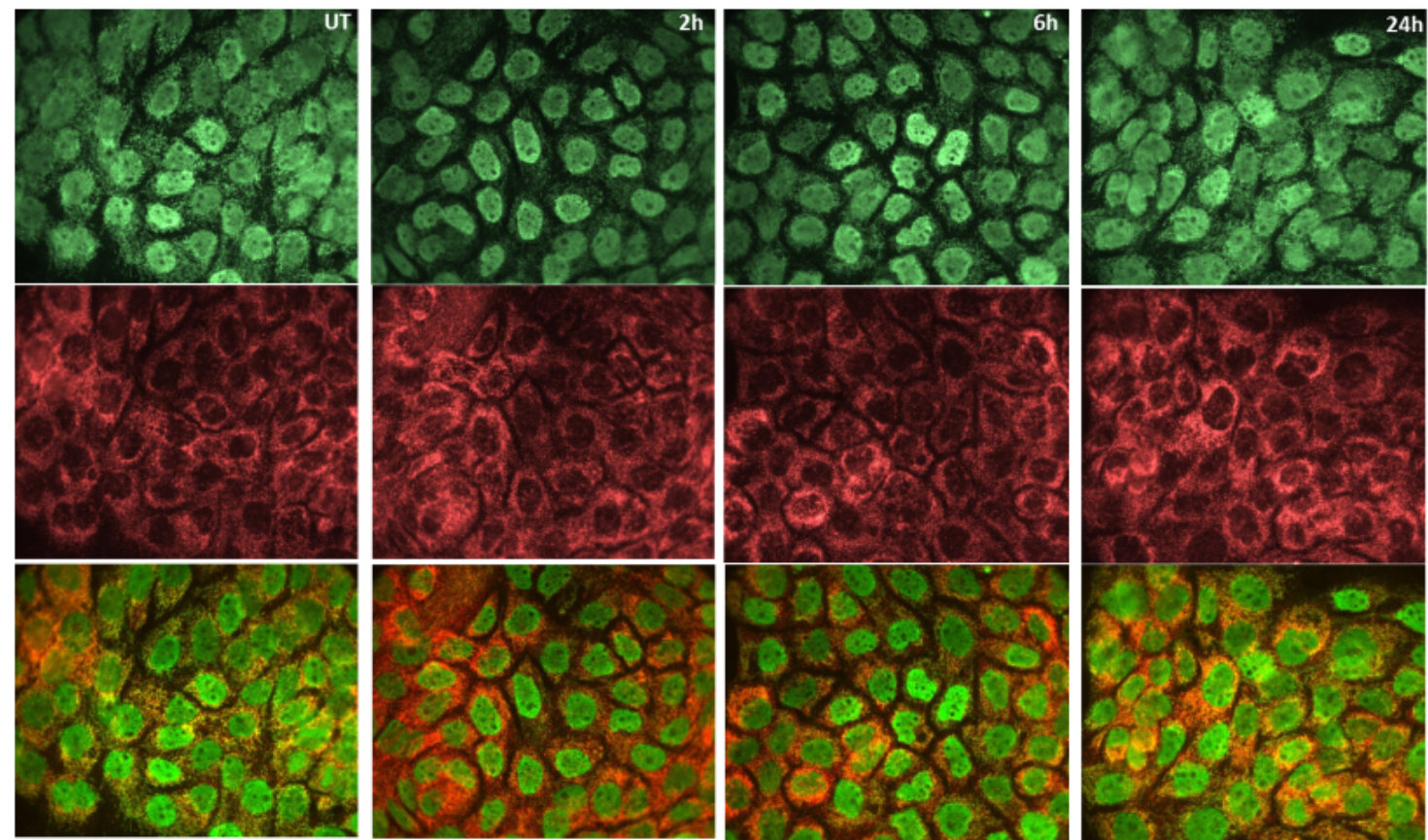 Figure 4 Legend: A431 treated with 100uM H2O2 at different time intervals(0, 2, 6, and 24 hours) were stained as described in the methods. Acetylated proteins were visualized in green fluorescence. Mitochondria were visualized in red fluorescence using mitochondria marker (anti-Lamp1, Abcam). Merged images identified co-localization of mitochondrial and acetylation signals. Our results showed that AAC02 detected dynamics changes of mitochondrial acetylation in A431 cells with H2O2  treatment.

To further determine which acetylated vesicular structures were being detected by AAC02, IF experiments were performed with Mitotracker orange as well as a lysosomal marker (Lamp-1 antibody).  Figure 2 shows robust co-localization between AAC02 staining and Mitotracker orange marker, but minimal co-localization with the lysosomal marker.  These data suggests that the vesicles being stained by AAC02 may be mitochondria.  These data are interesting as acetylome studies identify the mitochondria an organelle containing a large number of acetylated proteins.

Next, AAC02 and AAC03 were tested against other commercial anti-Ac-K reagents from Cell Signaling and ImmuneChem to compare their IF detection abilities. Results shown in figure 3, using the various antibodies showed that only AAC02 detected acetylated mitochondrial organelles by IF. These data further highlight the unique feature of AAC02 to visualize acetylated mitochondrial proteins by IF.  Of note, AAC03 showed robust acetylation detection of microtubules compared to other commercial anti-Ac-K reagents (figure 3).

Mitochondrial protein acetylation has been shown to be highly responsive to metabolic stimulants, and other agents that regulate metabolic and/or mitochondrial function.  To test the ability of AAC02 to track these dynamic and physiologic changes, cells were treated with H2O2.  Figure 4 shows that AAC02 detects a decrease in acetylated mitochondrial proteins by IF, which is evident by the loss of co-localization between Ac-K signal and the mitochondria marker hexokinase. These changes are dynamic as the loss of Ac-K signal in the mitochondria occurs by 2 hrs and appears to recover, at least partially, by 24 hrs. 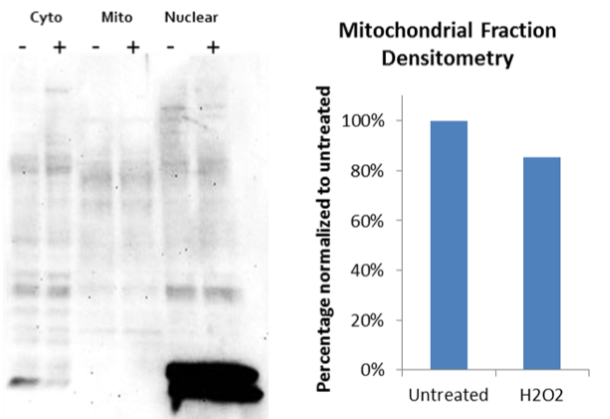 Figure 5 Legend: A431 cells were either untreated (-) or treated (+) with 100uM H2O2 for 2 hours. Mitochondria  were isolated and solubilized as described in the methods. Sample extracts from different cellular compartments were resolved in SDS-PAGE gel and then transferred to a PVDF membrane. Acetylated proteins were detected with AAC02. 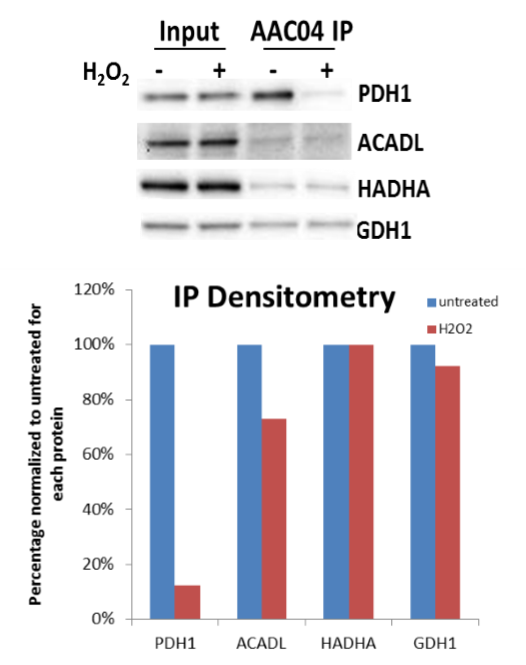 Figure 6 Legend: Lysates from A431 cells either treated (+) or untreated (-) with H2O2 for 2 hours were obtained using BlastR buffer and filter system. Immunoprecipitation of acetylated proteins from 1 mg of lysates with AAC04 beads were performed as described in the methods. Eluted proteins were resolved in a SDS-PAGE gel and then transferred to a PVDF membrane. Change in acetylation level of mitochondrial proteins were examined with antibodies against specific mitochondrial proteins. 10 ug of total lysates were as input.

Two high-affinity pan-Ac-K antibodies, AAC02 and AAC03, were developed and compared to established Ac-K reagents. These data show that these highly optimized reagents perform as well as other for detecting acetylated proteins, and are superior for enrichment of endogenous, acetylated proteins in cell and tissue lysates. Importantly, AAC02 shows a unique ability in detecting mitochondrial acetylation by IF, providing a simple and quick assessment of mitochondrial acetylation status in cells. Importantly, the  AAC04 beads allow for the enrichment of a representative pool of acetylated proteins without using the time consuming and labor intensive subcellular fractionation. Thus, providing an Ac-K toolset for identifying post-translational modification of mitochondrial proteins by acetylation.

Swiss 3T3 and A431 cells were grown in DMEM media (ATCC, VA) supplemented with 10% FBS (Altas Biologials, CO) and penicillin/streptomycin (ThermoFisher, MA). Trypsin/EDTA was obtained from Gibco (ThermoFisher, MA). BlastR lysis buffer and filter system (Cytoskeleton) was used to obtain a complete whole cell lysates for enrichment of acetylated proteins. Anti-acetyl lysine rabbit polyclonal antibody was from Cell Signaling. Anti-acetyl lysine rabbit polyclonal antibodies and bead conjugates were from ImmuneChem. Goat anti-mouse Alexa 488 and goat anti-rabbit Alexa 555 were from Invitrogen. Mitotracker orange was from ThermoFisher. Hydrogen peroxide and nicotinamide were from Sigma. TSA was from Cayman Chemical. Anti-lamp1 and anti-hexokinase 1 antibodies were from Abcam.

Mitochondria isolation from A431 cells

Cells were seeded on glass coverslips for at least 24 hours before treatment. For Swsis 3T3 experiment, cells were either treated or untreated with 1uM of TSA for 6 hours. Mitotracker orange (100nM) was added to cells and incubated for 30 minutes before fixation and the rest of steps as shown below. For competition experiment, 10ug/ml acetylated BSA was added to AAC02 and AAC03 to compete for acetylation signals. For A431 experiment, cells were either treated or untreated with 100uM of H2O2 for 2 hours. Cells were then fixed with 4% formaldehyde for 10 minutes followed by permeabilization with 0.5% triton x-100 for 15 minutes.  Cells were blocked with 2% BSA/PBST/5% normal goat serum for 30 minutes. Primary antibodies against acetylated proteins and mitochondrial hexokinase 1 were used at 1:500 and 1:100 respectively in 2% BSA/PBST. Acetylation signals and mitochondrial signals were visualized with goat anti-mouse Alexa 488 and goat anti-rabbit Alexa 555 respectively.

A431 cells, treated or untreated with 100uM H2O2, were lysed with ice-cold BlastR lysis buffer containing a cocktail TSA(1uM), nicotinamide(16.5mM), and protease inhibitors (PIC02). DNA was removed by passing the lysate through the BlastR filter system (Cytoskeleton, CO). After dilution with BlastR dilution buffer, protein concentrations were determined with ADV02 and measured at 600nm OD. 50ul of AAC04 beads were added to 1 mg of lysate for 1-2 hr at 4°C on an end-over- end tumbler. After incubation, the affinity beads from each sample were pelleted, and washed 3X with BlastR wash buffer. Bound proteins were eluted using bead elution buffer (Cytoskeleton, CO) and detected by immunoblotting.