The activity of the Rho family of proteins, including Rac1, is known to be regulated, in part, through ubiquitination (also termed ubiquitylation) events that can lead to signaling pathway regulation via degradation and/or localization of the modified protein (Visvikis, O. et al. 2010. Biol. Cell 102: 377-389. Nethe, M., & Hordijik, P.2010. J. Cell Sci. 123: 4011-4018). In many cases, the GTP-bound active form of Rac1 is the preferred substrate for ubiquitination. For example, it has been shown that cells treated with the bacterial toxin CNF1 leads to constitutive activation of Rac1 and subsequent mono- and poly-ubiquitination (Pop, M. et al. 2004. J. Biol.Chem. 279: 35840-35848).
Using the Signal Seeker™ Ubiquitination Detection Kit (Cat # BK161) we examined the ubiquitination of endogenous Rac1 in 3T3 cells treated with CNF1 toxin (Cat # CN04) and found that both mono- and polyubiquitination of Rac1 could be detected from 300 μg of 3T3 cell lysate.
Importantly, note that the non-specific interaction of unmodified Rac1 occurs with both ubiquitination affinity beads (UBA01) as well as ubiquitination control beads (CUB02) (lanes 2-5); however, the mono- and poly-ubiquitinated Rac1 only binds to ubiquitination affinity beads (lane 3) and not to the ubiquitination control beads (lane 5).  This data shows the utility of having appropriate control beads to help users distinguish the unmodified target protein band that is often present when performing ubiquitin IPs, which often occurs with every available ubiquitination enrichment tool. 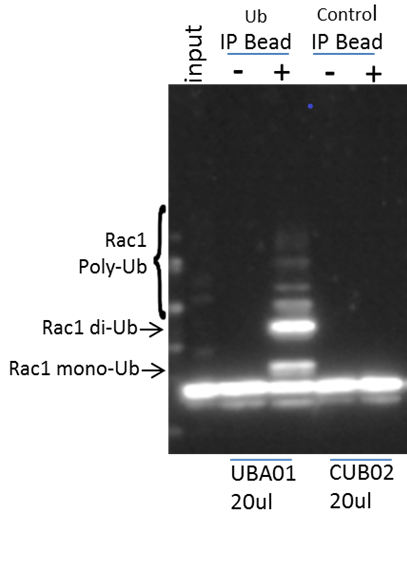 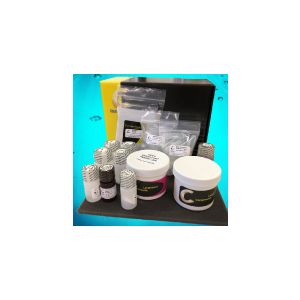 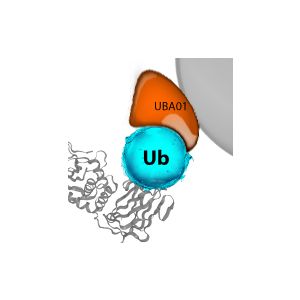