SUMOylation of a target protein is a recently discovered post-translational modification that has been shown to play a critical role in protein structure and function. Recent proteomic studies have identified hundreds of proteins that are SUMOylated. As SUMO modifications are relatively new compared to other PTMs, tools to investigate SUMO are not well established. Appropriate lysis buffers, high quality affinity reagents, and appropriate inhibitors are all critical reagents for effectively studying SUMO modifications.  Here we describe a newly developed Signal-Seeker SUMO 2/3 detection kit (BK162) that rapidly identifies SUMO 2/3 modifications for any target protein. This kit utilizes optimized buffers and inhibitors to preserve SUMO 2/3 modifications unlike conventional, non-denaturing lysis buffers.  Additionally, the sensitivity of the kit allows for investigation of endogenous and dynamic changes of SUMO 2/3 modifications. Finally, we show that the (BK162) kit allows for SUMO 2/3 detection from both cell culture and tissue.  Collectively, these studies highlight the utility of the (BK162) kit to investigate SUMO 2/3 modifications of several target proteins in various applications.

Dynamic post translational modifications (PTMs) like small ubiquitin- modifier (SUMO)ylation provide proteins with vastly expanded functionality.  SUMO modifications regulate many biological process, such as, transcriptional regulation and DNA repair1. In vertebrates 4 paralogs of SUMO exist, SUMO-1, SUMO-2, SUMO-3, and SUMO-42.  SUMO-2 and SUMO-3 are referred to as SUMO 2/3 because of their high similarity, and the inability to distinguish the two molecules endogenously.  Of interest, SUMO-2/3 appears to be more abundant than SUMO-1 and there is a free pool of SUMO-2/3 molecules that are utilized in response to cellular stresses3. Recent proteomic studies have identified hundreds of proteins that are SUMOylated4,5.  Still, these data need complementary validation and mechanistic studies to better define the importance of a given protein’s SUMO state both physiologically and pathologically. 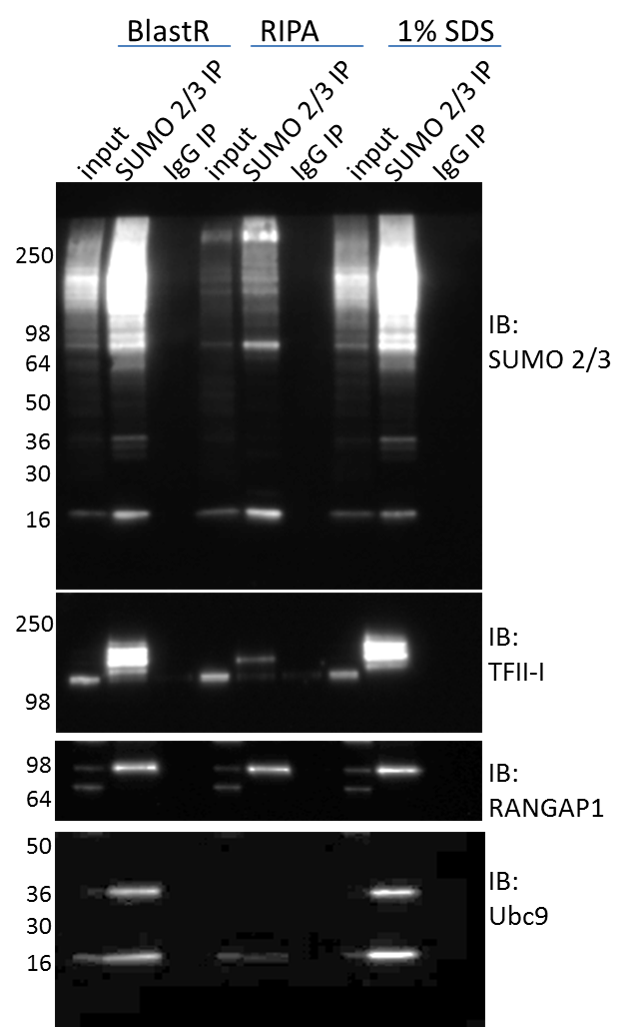 The high activity of deSUMOylases in cell lysates are also inhibited using the deSUMOylase inhibitor, NEM.  The (BK162) kit utilizes NEM in combination with BlastR buffer to maximize SUMO 2/3 enrichment by minimizing signal-loss due to deSUMOylase activity. Figure 2 clearly shows that lysing cells without NEM results in significant deSUMOylation of all proteins, as exemplified by loss of total and target-specific SUMO 2/3 signal.  These data collectively highlight the importance of choosing the appropriate lysis buffer and inhibitors when studying SUMOylation.

Additionally, data in figure 2 identify a simple approach for validating a SUMO 2/3 modification signal.  Simply lysing cells with or without NEM allows the investigator to determine if the SUMO 2/3 signal is real, as the band should disappear when NEM in removed from the lysis buffer. While additional validation methods should also be performed, this experiment may provide additional confidence in a SUMO 2/3 result.

Figure 2 Legend: Untreated A431 cells were lysed with BlastR lysis buffer (Cytoskeleton Inc.) supplemented with or without deSUMOylase inhibitor (NEM).  1mg of each lysate was incubated with the recommended amount of SUMO 2/3 affinity beads (ASM24-beads) (Cytoskeleton Inc.). Immunoprecipitated samples were separated by SDS-PAGE and transferred to PVDF. Western blot was performed with SUMO 2/3 antibody (ASM23-HRP), TFII-I, or Ubc9.

Figure 3 provides results obtained using the (BK162) kit (BlastR lysis, ASM24-beads, NEM, etc..) to effectively enrich and detect endogenous TFII-I changes in response to both taxol treatment as well as serum depletion (0% FBS).  The data highlights the ability of the (BK162) kit to detect modest, but endogenous changes in TFII-I SUMO 2/3 modifications in response to different stimuli, which alter the SUMO 2/3 state in both a positive and negative direction.  Interestingly, the stimulant Taxol reduces TFII-I’s SUMO 2/3 state in both Hela and A431 cells.  These changes appear modest, but were highly reproducible.  It is fair to wonder whether these changes would be detectable in an overexpression system, or would the signal be completely masked? Removal of FBS from the cell culture media for 24 hours increased the TFII-I SUMO 2/3 state in Hela cells, but reduces it in A431 cells.  These data highlight the variability in PTM results when using different cell line models, and highlights the importance of having tools to detect endogenous SUMO 2/3 modifications in multiple model systems. 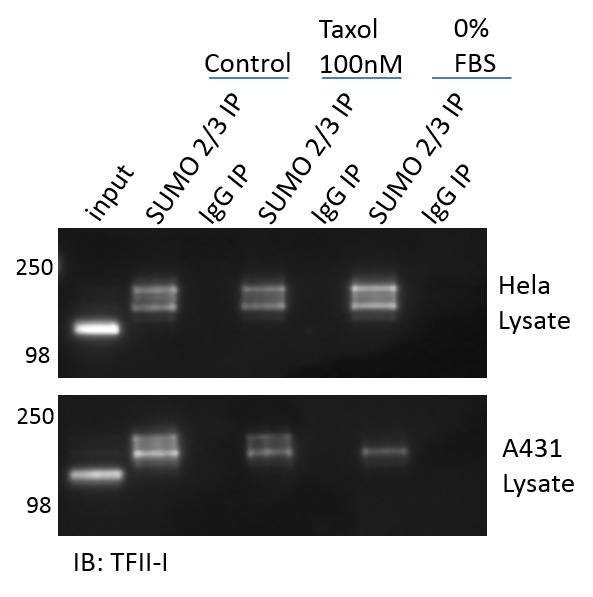 These findings highlight the importance of using robust SUMO 2/3 affinity reagents that have been optimized for enriching and detecting endogenous SUMO 2/3 modified target proteins. Additionally, the (BK162) kit also provides IgG control beads (CIG01), which allows the user to determine the specificity of enrichment, and will often times highlight the unmodified protein on interest when it binds non-specifically (see RhoGDI, Figure 4).

Investigation of SUMO 2/3 modified proteins in tissue is often desirable to translate findings from cell culture to animal models, as well as when investigating mechanistic causes of specific disease models. The (BK162) effectively isolates and enriches SUMO 2/3 modified proteins in both cell culture and tissue lysates.  Mouse brain, liver, and heart were isolated, and the tissue was processed with the BlastR lysis system (see methods). SUMO 2/3 modified proteins were enriched from the various tissue lysates using ASM24-beads and the results show effective enrichment of total and specific SUMO 2/3 modified proteins (Figure 5).   It is interesting to see the high variability in SUMO 2/3 signals between different tissue types.  Note, that the SUMO 2/3 signal intensity for a specific protein (i.e. Ubc 9) does not correlate with the signal intensity observed for the total SUMO 2/3 protein profile.  These data highlights the importance of investigating both total as well as target protein specific SUMO 2/3 changes. It was also intriguing to find specific SUMO 2/3 modification of RhoGDI in heart tissue, but not brain or liver in wild type mice.  It will be interesting to determine if this is mechanistically important, in regulating RhoGDI in heart versus other tissue types.  Additionally, it will be interesting to determine if the RhoGDI SUMO 2/3 state is activated in brain and liver in certain disease models. 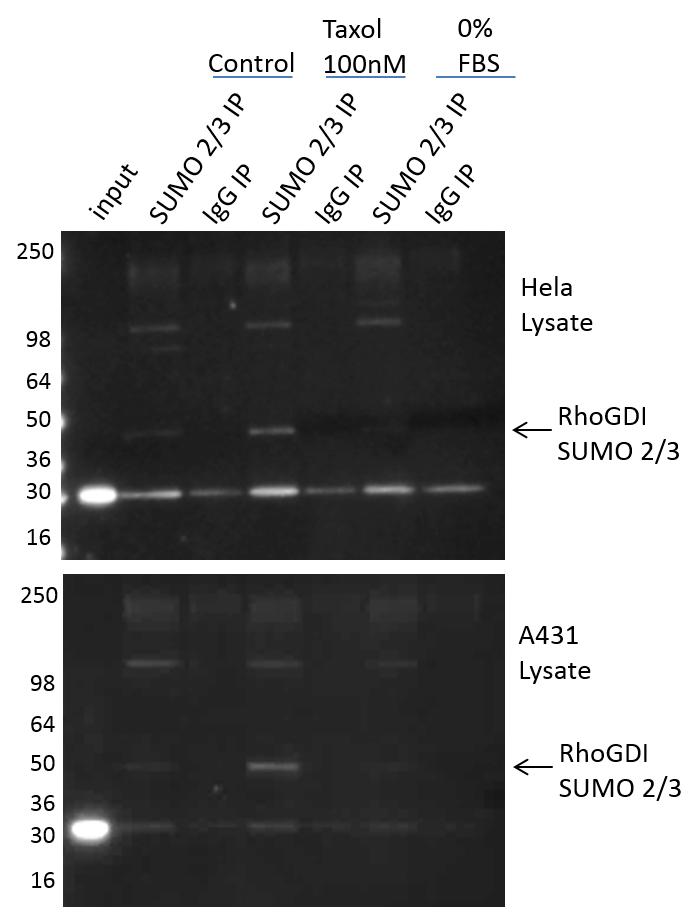 Hela and A431 cells were lysed with ice-cold BlastR lysis buffer containing a cocktail NEM, and protease inhibitors (PIC02). DNA was removed by passing the lysate through the BlastR filter system (Cytoskeleton, CO). After dilution with BlastR dilution buffer, protein concentrations were determined with ADV02 and measured at 600nm OD. For tissue lysate preparation, mouse liver or heart was lysed at 1 mL of BlastR lysis buffer per 100mg of tissue. For these experiments 100mg of tissue was processed. After addition of 1mL of  BlastR lysis buffer to 100mg of fresh tissue., the sample was placed into a homogenizer and 10-12 strokes were applied. The viscous tissue lysate was first passed through the BlastR filter to remove genomic DNA. Equal volume of BlastR dilution buffer was then added to the filtered lysate and gently mixed. Lysate was then spun in a microcentrifuge at 14k rpm for 15min at 4°C to pellet any remaining tissue debris. Additional BlastR dilution buffer was added to the recovered supernatant for a final dilution of 1:5. Protein concentrations were determined with ADV02 and measured at 600nm OD.

The appropriate amount of SUMO 2/3 affinity beads (ASM24-beads) or mIgG control beads (CIG01-beads) were added to 1 mg of lysate for 1-2 hr at 4°C on an end-over- end tumbler. After incubation, the affinity beads from each sample were pelleted, and washed 3X with BlastR wash buffer. Bound proteins were eluted using bead elution buffer (Cytoskeleton, CO) and detected by western immunoblotting. 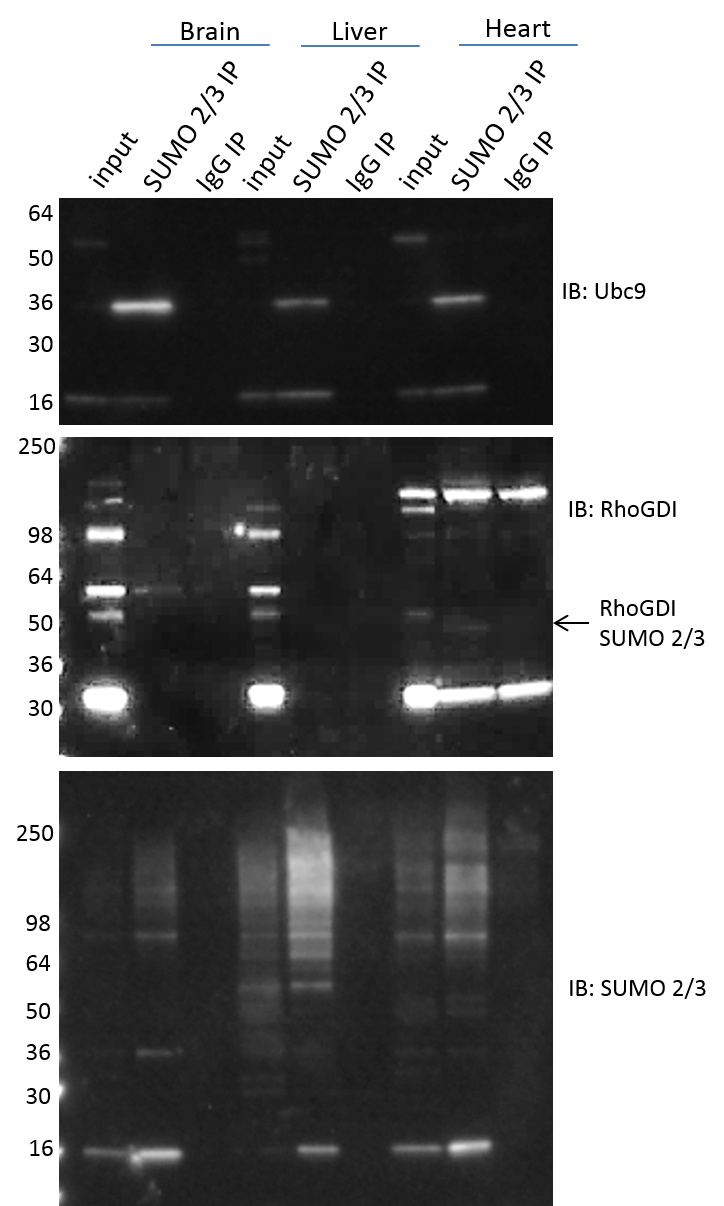