Poly-ubiquitination of a target protein is a well-established mechanism to regulate proteasome mediated degradation; additionally, both poly- and mono-ubiquitination have been shown to control critical protein functions like protein: protein interaction, spatial regulation, and crosstalk with other post-translational modifications (PTMs). Because of its ubiquitous nature, and its clear importance in regulating an array of protein functions, it is no longer practical to leave the investigation of ubiquitination (Ub) to just a few ubiquitin experts. However, user-friendly tools are needed in order for non-Ub-specialists to efficiently study whether and under what conditions, their target protein is ubiquitinated. Here we describe a newly developed Signal-Seeker Ub kit (BK161) that rapidly identifies both poly- and mono-Ub for any target protein. To highlight the utility of this kit, detection of endogenous poly- and mono-Ub of Rac1 as well as chain specific ubiquitin detection was performed. In particular we compare the kits ubiquitin affinity beads, UBA01-beads with other commercially available ubiquitin affinity reagents. Collectively, these studies show that UBA01 is the most robust and precise mono- and poly-Ub detection reagent available, and utilization of the comprehensive BK161 kit will provide the best path to determining if a target protein is ubiquitinated.

Post-translational modifications (PTMs) are highly regulated alterations to a protein, whereby the modification is added or removed in a specific manner and plays a critical role in controlling a proteins structure and function(1).

PTMs like ubiquitin have been shown to regulate many different cellular processes and disease pathologies (2-4).PTM modifications are so abundant that they increase the number of unique protein-forms (or proteoforms) from about 30,000 gene products to over a million proteoforms (5). Surprisingly, the investigation of a target protein PTM profile is not yet viewed as a standard requirement for basic protein and pathway characterization. This is, in part, due to a paucity of user-friendly tools.

Signal-Seeker™ Kits were developed to allow the non-PTM or pro-teomics specialists the ability to gain critical insight into the endogenous form of their protein of interest in less than one day with little or no specialized method development.

Signal-Seeker™ Kit BK161 provides a comprehensive set of reagents to determine the Ub state of any endogenous protein of interest. The kit includes ubiquitin affinity beads UBA01 which are based on a proprietary formulation of Ubiquitin Binding Domain proteins (UBDs). This white paper presents results of a comparison between UBA01 beads and other well established commercially available ubiquitin enrichment reagents. 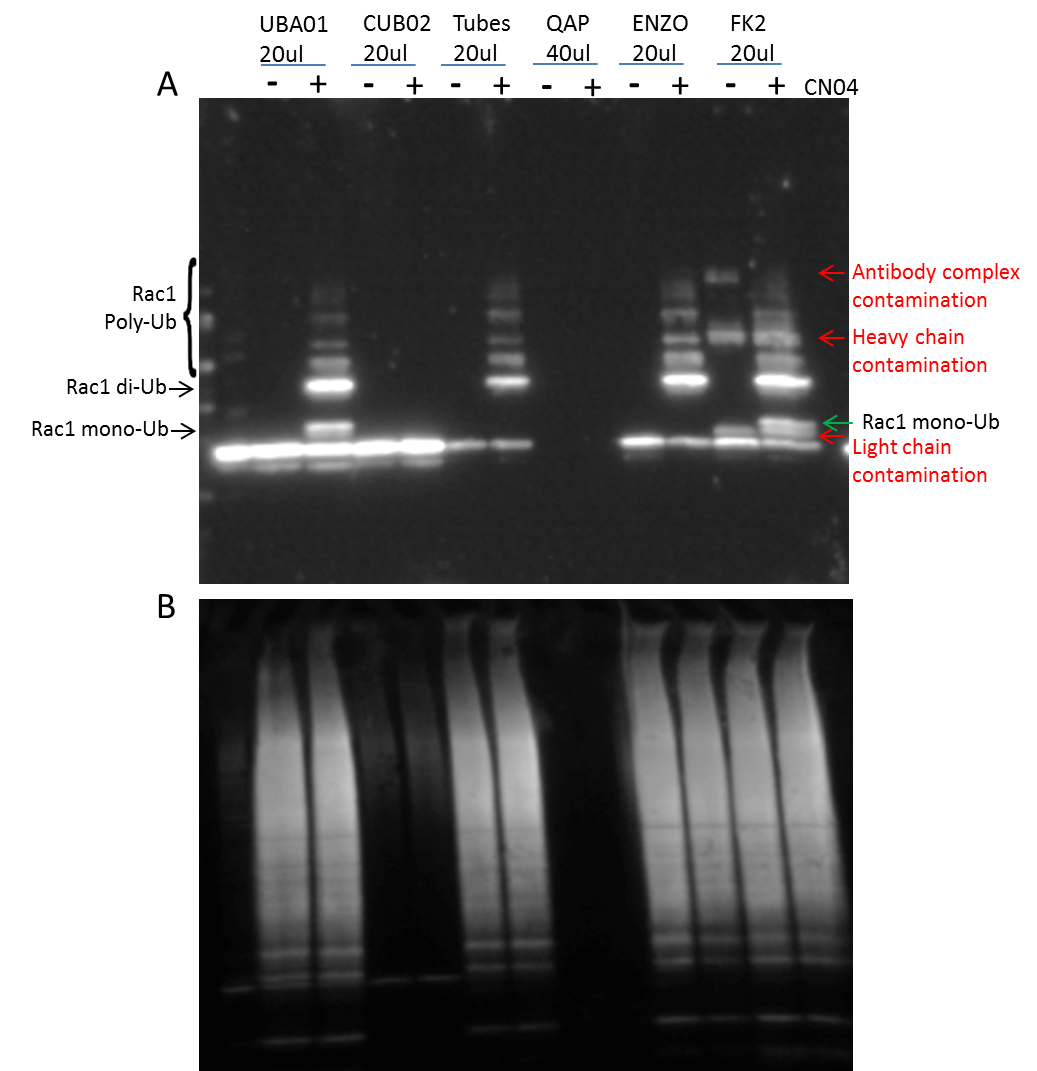 UBA01 is a superior Reagent for the detection of monoubiquitinated proteins

The identification of both poly– and mono-Ub of a target protein is critical, as both types of modification are known to have essential regulatory functions (2). The cytosolic necrotizing factor 1 (CN04) has been shown to induce Rac1 mono– and poly-Ub in the presence of MG-132 (6), and was used as a proof-of-principle, ubiquitin-modified target protein. 3T3 cells were pre-treated with MG-132 followed by CN04 treatment, at which point they were then lysed with BlastR™ buffer (a component of BK161 kit), and immunopre-cipitated with UBA01-beads (Ub affinity beads & a component of (BK161) kit), CUB02-beads (Ub control beads & a component of BK161 kit), Tubes (Lifesensors UM401, agarose-Tube 1), QAP (ENZO, UBIQAP-TURE-Q kit, BML-UW8995-0001), ENZO (ENZO, DSK2 UBA do-main, BML-UW9835-0500), and FK2 (MBL Life science, anti-multi ubiquitin mAb-agarose, D058-8). Samples were then separated on an SDS-PAGE gel and transferred to PVDF. Rac1 Ub was examined using a Rac 1 antibody (Figure 1).

The data shows that UBA01-beads beads and FK2 effectively captures both Rac1 mono– and poly-Ub species which have previously been reported to occur in Rac1 (6). However, the Rac-1 Ub profile captured with UBA01-beads was much easier to interpret compared to the FK2 captured profile, as the UBA01-beads beads did not suffer from the heavy and light chain contamination that commonly occurs with an antibody-based immunoprecipitation system (note Fig 1 red arrows).

Importantly, none of the other ubiquitin domain (UBD)-based affinity beads (Tubes, QAP, ENZO) were able to identify the mono-Ub of Rac1, which is problematic, as mono-Ub is a critical regulatory mechanism for a multitude of target proteins. This data set clearly establishes UBA01-beads beads as a superior  reagent for the study of monoubiquitination.

The BK161 kit also provides CUB02-beads control beads. These are identical to the UBA01-beads beads except for two point mutations that abolish Ub binding. This makes them an excellent control bead which are essential when performing Ub detection experiments, because the unmodified form of many target proteins is often captured during the Ub IP step. Figure 1 clearly shows that CUB02-beads identified the non-specific interaction with the unmodified Rac1, but did not interact with Rac1-Ub providing precise results as to which bands correspond to ubiquitinated Rac1. 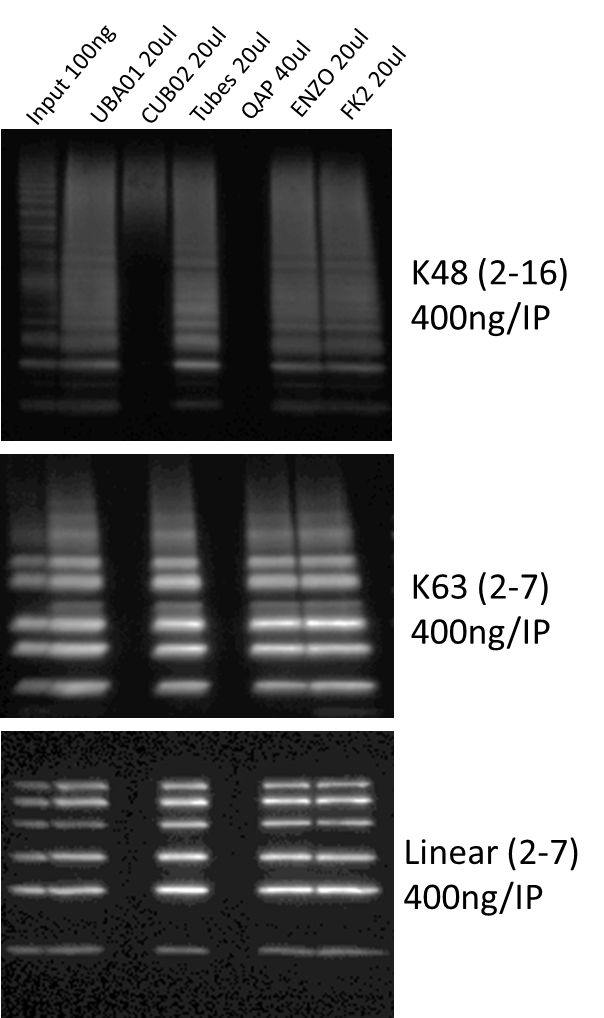 Figure 2 Legend: K48, K63, and linear ubiquitin chains were reconstituted as recommended. 400ng of each ubiquitin chain were incubated with UBA01-beads, CUB02-beads, Tubes, QAP, ENZO, and FK2 according to the IP method. Immunoprecipitated samples were separated by SDS-PAGE and transferred to PVDF. Western blot was performed with an anti-ubiquitin antibody AUB01-HRP to measure chain-specific ubiquitin isolation.

Total Ub identification by these various Ub detection reagents was determined by re-probing the Rac1 Ub blot with a ubiquitin-HRP specific antibody (AUB01-HRP) . Figure 1B shows similar total Ub recognition by UBA01-beads, Tubes, ENZO, and FK2. While this data suggests that the ability of these reagents are similar, when cou-pled with Figure 1A an alternative interpretation is that the results from total Ub may be misleading, and should only be used for interpretation when the results are drastically different. For example, when comparing UBA01-beads Ub enrichment compared to UBIQAPTURE-QAP Ub enrichment, it is clear that UBA01-beads is capturing a Ub profile where as UBIQAPTURE-QAP is not effectively binding any ubiquitinated species.

To further investigate the Ub identification capabilities of these reagents, immunoprecipitation (IP) was performed against chain specific ubiquitin. 400ng of K48, K63, and linear ubiquitin was incubated with the various Ub affinity reagents. Samples wereresolved on an SDS-PAGE gel and transferred to PVDF. AUB01 ubiquitin-HRP antibody was used to detect ubiquitin chains (Figure 2). Similar to the total ubiquitination profiles seen in Figure 1A, UBA01-beads, Tubes, ENZO, and FK2 all effectively captured the three types of ubiquitin chains. These data suggest that UBA01-beads is as effective as established ubiquitin affinity reagents at capturing saturating amounts of total and chain-specific ubiquitin profiles.

UBA01-beads and FK2 were clearly the most comprehensive ubiquitin affinity reagents as they could capture mono– and polyubiquitinated species including mono-Ub Rac1, and other target proteins (data not shown), further analysis between these two reagents was warranted.

Titrations of k48, k63, and liner ubiquitin chains were used to determine which of these two reagents had a higher affinity for these different ubiquitin chains. Figure 3 shows that UBA01-beads consistently outperformed FK2 for recognition of k48 and k63 ubiquitin chains at low concentrations; thus, providing compelling evidence that UBA01-beads will provide the best method for total Ub detection particularly when detecting low levels of a given ubiquitinated species as is generally the case for endogenous species. 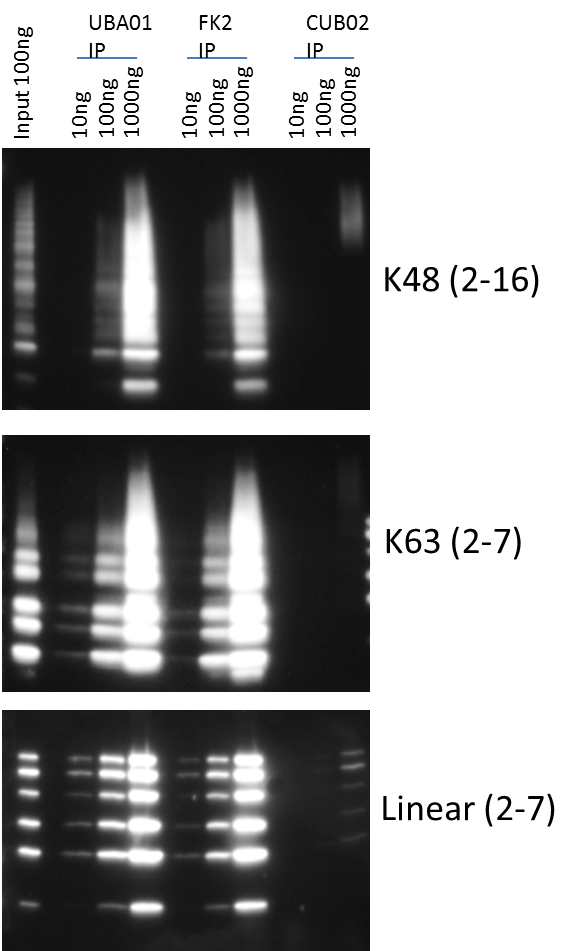 Figure 3 Legend: K48, K63, and linear ubiquitin chains were reconstituted as recommended. 10, 100, and 1000ng of each ubiquitin chain were incu-bated with UBA01-beads, CUB02-beads, and FK2 according to the IP method. Immunoprecipitated samples were separated by SDS-PAGE and transferred to PVDF. Western blot was performed with an anti-ubiquitin antibody AUB01-HRP to measure chain-specific ubiquitin isolation.

Collectively, these results indicate that the UBA01-beads beads are a superior affinity reagent for the capture of ubiquitinated protein species. The data also shows that the CUB02-beads beads serve as an excel-lent control for non-specific protein binding.

For chain specific ubiquitin IP, K48, K63, and linear ubiqui-tin chains were obtained from ENZO life sciences (ENZO, NY) and resuspended according to the manufacturer’s instructions. The immunoprecipitations were performed in NP-40 lysis buffer for 1-2 hr at 4°C on an end-over-end tumbler. After incubation, the affinity beads from each sample were pelleted, and washed 3X with NP-40 lysis buffer. Bound proteins were eluted using bead elution buffer and detected by western immunoblotting.