Cytoskeleton, Inc. is a reliable source of compound screening services for tubulin and microtubule targeted projects. Cytoskeleton’s tubulin was used to determine the tubulin structure in three dimensions (Nogales et al. 1993, 1997) indicating high structural uniformity and purity. Over the past decade we have performed numerous contracts for primary and secondary screening as well as pre-clinical SAR based drug development helping compounds such as Disorazol A1 and Halaven (halichondrin B) move toward clinical trials. There are three basic formats, first is the traditional absorbance based tubulin polymerization assay which measures turbidometry of scattered light from microtubule interference. The second is a fluorescent format which uses a microtubule binding fluorophore to quantitate polymer mass. Drugs such as taxol (paclitaxel), vinblastine, colchicine and nocodazole can easily be detected. Tubulins, such as Hela or MCF7 cell tubulin, Caki-1 tumor tubulin, neuronal tubulin, soybean tubulin, fungal tubulin and tubulin antibody, are used as the target protein. Third is the ELISA series which is a sandwich ELISA based on a universal tubulin capture plate, the adjunct primary is specific to a tubulin isoform, a posttranslational modification (PTM) or an alpha-tubulin monoclonal antibody for total tubulin measurement.

Other assays can also be design and developed and we support all of our services with a dedicated technical services department and years of laboratory experience in the fields of cell biology, cancer biology, cardio-vascular research and neuroscience.

More in depth discussion on tubulin and microtubule assays can be found below.

If you need immediate support, please send an e-mail describing your requirements to tservice@cytoskeleton.com

The fluorescence based polymerization assay

This assay is a highly sensitive one step procedure for determining the effects of drugs or proteins on tubulin polymerization. It is an adaptation of an assay originally described by Bonne, D. et al.[1].  Polymerization is followed by fluorescence enhancement due to the incorporation of a fluorescent reporter into microtubules as polymerization occurs. The standard assay uses neuronal tubulin (Cat. # T240) which generates a polymerization curve representing the three phases of microtubule formation, namely nucleation (Phase I in Figure 1), growth (Phase II in Figure 1) and steady state equilibrium (Phase III in Figure 1).  Other tubulins, such as HeLa and MCF-7 tubulin (Cat. # H001 & H005) can also be used in this assay format.

Compounds or proteins that interact with tubulin will often alter one or more of the characteristic phases of polymerization.  For example, Figure 1 shows the effect of adding the anti-mitotic drug paclitaxel to the standard polymerization reaction.  At 3 µM final concentration paclitaxel eliminates the nucleation phase and enhances the Vmax of the growth phase.  Thus, one application of this assay is the identification of novel anti-mitotics.  Figure 1 also shows the effect of adding the microtubule destabilizing drug, vinblastine.  At 3 µM final concentration, vinblastine causes a decrease in Vmax and a reduction in final polymer mass.

Figure 1:  Fluorescence Polymerization Assay in Presence of Paclitaxel  or Vinblastine 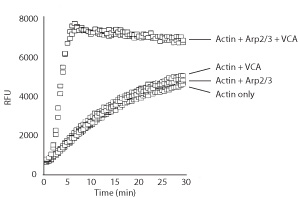 Figure 1:  Standard polymerization reactions were carried out as described in the Assay Protocols Section V.  Each well of the assay plate contained 5 µl of 10x strength compound which was warmed for 1 min to 37°C, 50 µl of tubulin solution was pipetted into each well. Excitation was at 360 nm and emission at 420 nm.  The three phases of tubulin polymerization are shown for the control polymerization curve.

The classic tubulin polymerization assay uses absorbance readings at 340 nm to follow microtubule formation.  It is based upon the fact that light is scattered by microtubules to an extent that is proportional to the concentration of microtubule polymer. This assay is offered by Cytoskeleton Inc. (Cat. # BK006P / CDS03P).  The fluorescence based assay has been compared to the absorbance based format and the comparisons are given in Table 1 below.  For help in selecting the best assay format for your needs contact tservice@cytoskeleton.com.

Table 1: Comparison of Fluorescence versus Absorbance Based Polymerization Assays

*    Duplicate samples
**   Under standard assay conditions.  Conditions can be optimized for polymerization enhancers or inhibitors.

Tubulin is composed of a heterodimer of two closely related 55 kDa proteins called alpha and beta tubulin.  The proteins are encoded by separate genes, or small gene families, whose sequences are highly conserved throughout the eukaryotic kingdom. Consequently, tubulin isolated from Porcine brain tissue is highly homologous to tubulin isolated from any eukaryotic source.  This fact results in the technical benefit that Porcine tubulin (in the form of microtubules, see below) can be used to assay proteins originating from many diverse species, e.g.; Saccharomyces cerevisiae[2], Drosophila melanogaster[3]. 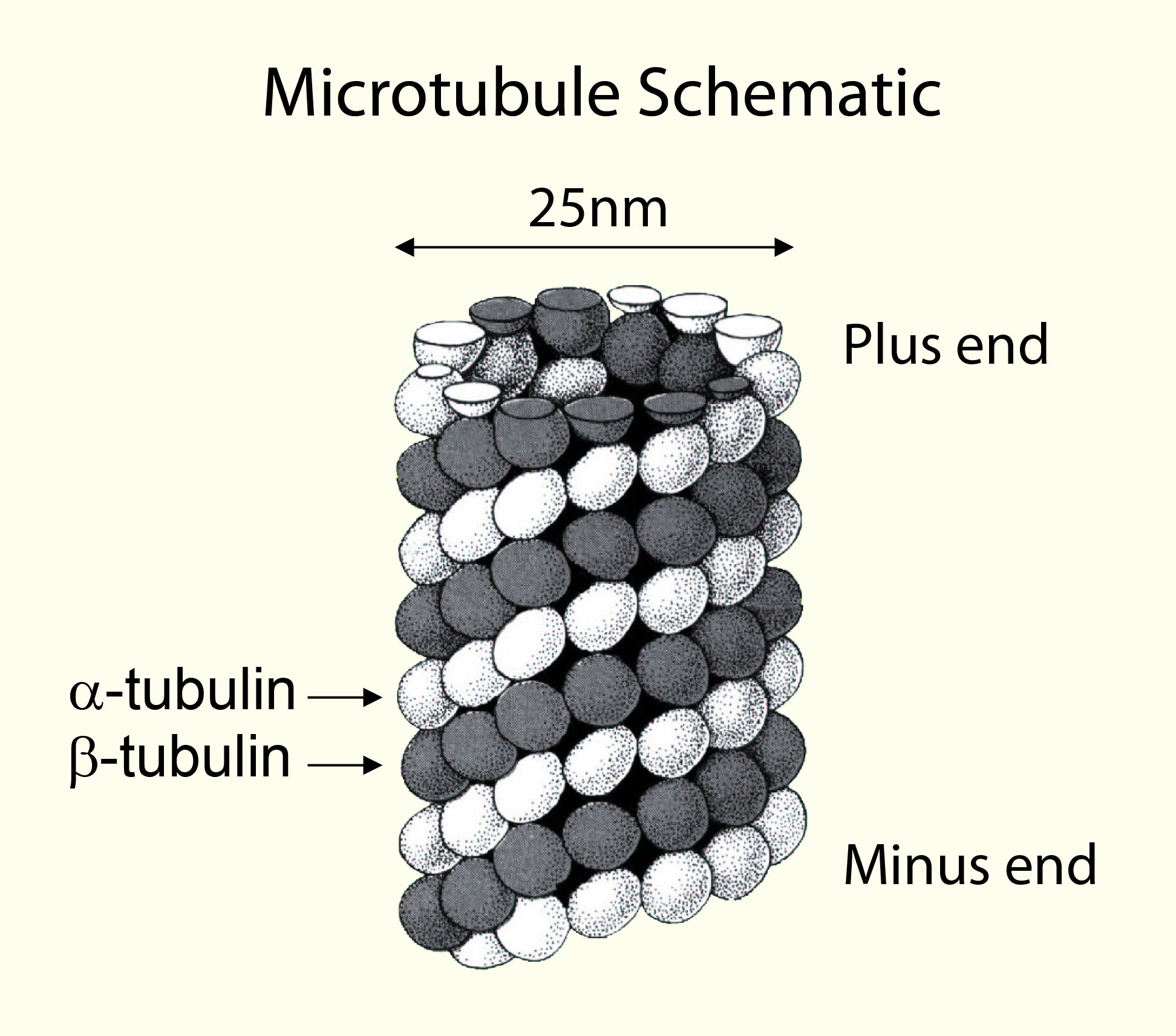 Tubulin polymerizes to form structures called microtubules (MTs) (see Figure 2B).  When tubulin polymerizes it initially forms proto-filaments, MTs consist of 13 protofilaments and are 25 nm in diameter, each µm of MT length is composed of 1650 heterodimers[4]. Microtubules are highly ordered fibers that have an intrinsic polarity, shown schematically in Figure 2A.  Tubulin can polymerize from both ends in vitro, however, the rate of polymerization is not equal.  It has therefore become the convention to call the rapidly polymerizing end the plus-end of a microtubule and the slowly polymerizing end the minus-end.  In vivo the plus end of a microtubule is distal to the microtubule organizing center.

This assay uses highly purified tubulin from Porcine brain.  The consistent quality of the protein is critical to dependable and reproducible results. An example of the tubulin used for BK011P (Cat. # T240-DX) is shown in Figure 3.

Porcine brain tubulin (T240-DX) was run on a 4-20% SDS PAGE system and stained with 0.1% Coomassie Blue.  The gel in figure 3 shows 50 mg of tubulin protein.  Scanning densitometry determined the protein to be >99% pure tubulin.

Brief Description Of The Three Phases Of Tubulin Polymerization:

This section is designed to familiarize the reader with the  phase of polymerization.  The graph shown below represents a generalized tubulin polymerization curve. 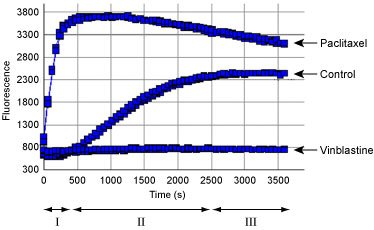 Figure legend: The graph depicts the recognized phases of microtubule polymerization, as assayed by turbidity measurements at OD340.  These are the lag phase (phase I), the elongation phase (phase II) and the steady state phase (phase III). These phases can be seen clearly in a control reaction such as that for line number 2.

The Lag Phase:        The first thing necessary to achieve microtubule polymerization is the presence of nucleation site/s.  As the name suggests, this is simply a site from which microtubule polymerization can occur.  A nucleation site in the cell for example would be a centrosome or an axoneme.  In the in vitro reactions that we have used for these drug assays the tubulin must create its own nucleation sites by forming small oligomers from which larger microtubule polymers can grow.  Formally, in vitro nucleation can be defined as the formation of early oligomers, up to the point where their association rate constants become independent of their size.  Because the oligomeric nucleation sites are very small, and there are not large numbers of them initially, they will not scatter light to any appreciable degree and hence the resultant lack of any turbidity reading during this lag phase.

It is clear from the above description that any compound affecting the critical concentration of tubulin under a given set of experimental conditions may affect the nucleation (lag phase) of the polymerization reaction.  It should also be remembered that, in certain cases, the critical concentration for nucleation is higher than the critical concentration for microtubule elongation.  Nucleation is determined in the following analysis by measuring the Onset time. This is the time taken to pass 1/10th of the control’s maximum optical density. For example: with a maximum control OD340nm of 0.10, the Onset time will be equal to the time when the polymerization profile passes 0.01 OD340nm.

The Growth Phase:  Nucleation, assembly and disassembly are the three events that contribute towards this phase of polymerization.   If turbidity analysis indicates that a compound is affecting the growth phase, one can then manipulate polymerization conditions in order to examine the assembly and/or disassembly reactions separately.   These experiments would begin to address the mechanism of action of the compound.  For example, to examine growth (assembly/disassembly) rate independently of nucleation one can introduce seeds into the tubulin solution prior to polymerization.  One can selectively examine disassembly by creating conditions in which both nucleation and assembly are negligible.  This is most frequently accomplished by extensive dilution of the polymerization reaction to below the critical concentration. Growth rate is determined in the following analysis by measuring the polymerization rate in mOD340nm units per min. The highest rate (Vmax) is utilized for this calulation.

The Steady State Phase:                The steady state phase is established when the free heterodimer concentration is equal to the critical concentration for polymerization.  Hence the polymer mass concentration remains essentially constant even though heterodimers are continuously being taken up in the polymer and dissociated from the ends.  Any compound that lowers the critical concentration for polymerization will result in the production of a greater polymer mass and a concomitant increase in the turbidity measurement at steady state.  The steady state is obtained from the following analysis by measuring the maximum optical density. By comparing this to the control’s maximum optical density we can determine whether the samples show different activity.

The Microtubule Network As A Target For Therapeutic Agents:

Microtubules are formed by the polymerization of the heterodimeric protein tubulin.  There are at least 14 tubulin isotypes in higher eukaryotes, some of which are expressed in a tissue specific manner.  Observation of microtubule polymerization in vitro led to the discovery that microtubules are intrinsically dynamic structures that are continually in a state of flux.  This property, termed dynamic instability, was subsequently shown to occur in vivo.  Importantly, microtubule dynamics have been shown to alter during the cell cycle and are often very different between cell types.  The dynamic nature of microtubules is now recognized to be essential for them to mediate their various cellular functions.    Agents that can selectively disrupt  microtubule dynamics, either by targeting a specific tubulin isotype or a particular stage of cell division would be predicted to have great therapeutic value.  Several highly promising anti-cancer drugs (which exploit the difference in microtubule dynamics between rapidly dividing (cancerous) and predominantly non-dividing (most normal cell populations) cells have been developed that act by disrupting microtubule dynamics.  These include microtubule de-stabilizing drugs such as vinblastine and the stabilizing drug taxol.

Introduction To The In Vitro Assay Used In These Studies:

In order to assess a compound's potential to effect tubulin polymerization one must develop a suitable assay.  One such assay follows polymerization in vitro by measuring the increase in absorbance at 340 nm.  The effect of a drug upon polymerization is reflected as an alteration in the turbidity measurements.

The intrinsic ability of pure tubulin to polymerize is very much a function of the experimental conditions.  Under a given set of conditions a polymerization curve will reflect the three major phases of the polymerization event, namely nucleation (lag phase), growth (growth phase) and steady state (steady state phase).  However, if one has reason to believe that the compound of interest is having a major effect during a specific phase then one can manipulate the polymerization conditions so as to favor a particular phase.  The assay conditions that we have selected generate a polymerization reaction that is relatively sensitive to both stabilizing and destabilizing factors.  This is the assay of choice when the effect of a compound cannot be predicted, as in the preliminary screen of a novel compound.  Clearly, the turbidity assay is very versatile and it has been used to identify and characterize many microtubule binding compounds.