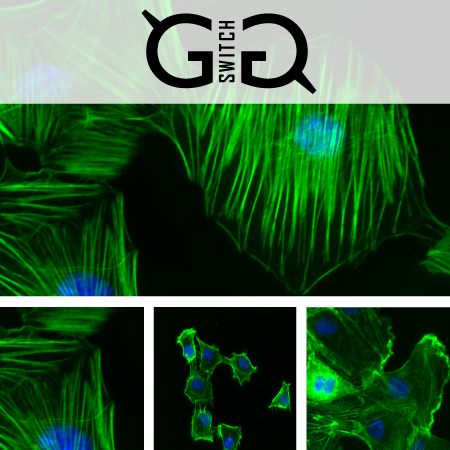 Cytoskeleton's products have been cited hundreds of times over the past 18 years. Please contact Cytoskeleton's Technical Support at tservice@cytoskeleton.com for the latest citations.

Question 1:  Which small G-protein activators are best for neuronal tissue or cells?

Answer 1:  Cytoskeleton offers a variety of GTPase activators that are a part of our G-switch™ line of small G-protein tools that work well for many different types of cells and tissue.  We have a Rho activator (Cat. # CN01; calpeptin) that indirectly activates RhoA, B and C in a variety of cell types via a mechanism involving inhibition of Shp-2 phosphatase.  Inhibition of Shp-2 allows constitutive activation of Rho GEFs.  Calpeptin also inhibits calpain-1 in a mechanism that is unrelated to Rho activation.  We also have a Rac/Cdc42 activator (Cat. # CN02; EGF) that indirectly activates Rac1, Rac2, Rac3 and Cdc42 proteins in a variety of cells through activation of the epidermal growth factor receptor-mediated signaling cascade.

Question 2:  Why are the CNF-based activators a better choice?

Answer 2:  The GTPase activators that are based on the catalytic domain of the bacterial cytotoxic necrotizing factor (CNF) toxins are the best choice for activating small G-proteins for multiple reasons.  In contrast to methods that rely on over-expression or knockdown of target proteins (e.g., DNA transfection of dominant negative or constitutively active Rho mutants, RNAi knockdown) , the G-switch™ reagents act rapidly on the endogenous target protein (<3 hours), thereby optimizing the chance of generating a more physiologically relevant response.  In addition, because they act directly on the target proteins, non-specific activation of other pathways is avoided.  The activated state of GTPases is maintained for hours, providing an ample experimental window for studying GTPase activation or inhibition of the activated protein.