Recent Discoveries on ABP’s and their Effect on Synaptic Plasticity

Rapid changes occurring at the level of microscale connections between neurons are the primary mechanism for learning and memory and are known as synaptic plasticity. Dendritic spines are dynamic structures with essential roles in brain connectivity and their ongoing formation, disappearance, and stabilization are critical for long-term synaptic plasticity. The actin cytoskeleton is a structural element underlying the proper development and morphology of dendritic spines, where it controls the morphological and structural changes induced by synapse activation[1]. The three-dimensional structure and dynamics of actin filament networks are regulated by actin binding proteins (ABPs)[2]. We describe recent studies highlighting both established and novel actin binding proteins and their effect on synaptic plasticity

Spine stability is primarily supported by a filamentous (F)-actin network, which are comprised of two distinct pools: F-actin forming the actin mesh are very dynamic and can change very rapidly; alternatively, stable, thick F-actin bundles can persist for long time periods (see figure 1). Previous work showed that Abl2 is an actin binding protein that is important for spine size and stability.  In a recent study by Shaw et al.  they showed that the complex Abl2:cortactin can specifically control the pool of stable F-actin as a mechanism to regulate dendritic spine size and stability in hippocampal neurons[3].  Cortactin is also an ABP that has been shown to localize to dendritic spines and promote spine stability.  Interestingly, when Abl2 is depleted, some dendritic spines maintain their stable pool of F-actin and can undergo activity induced enlargement, and this increase was associated with increased cortactin, possibly alluding to independent functions for cortactin.  A recent study using cortactin knockout mice showed that loss of cortactin led to deficits in hippocampus-dependent spatial memory formation, and impaired long-term potentiation with a complete absence of structural spine plasticity[4]. 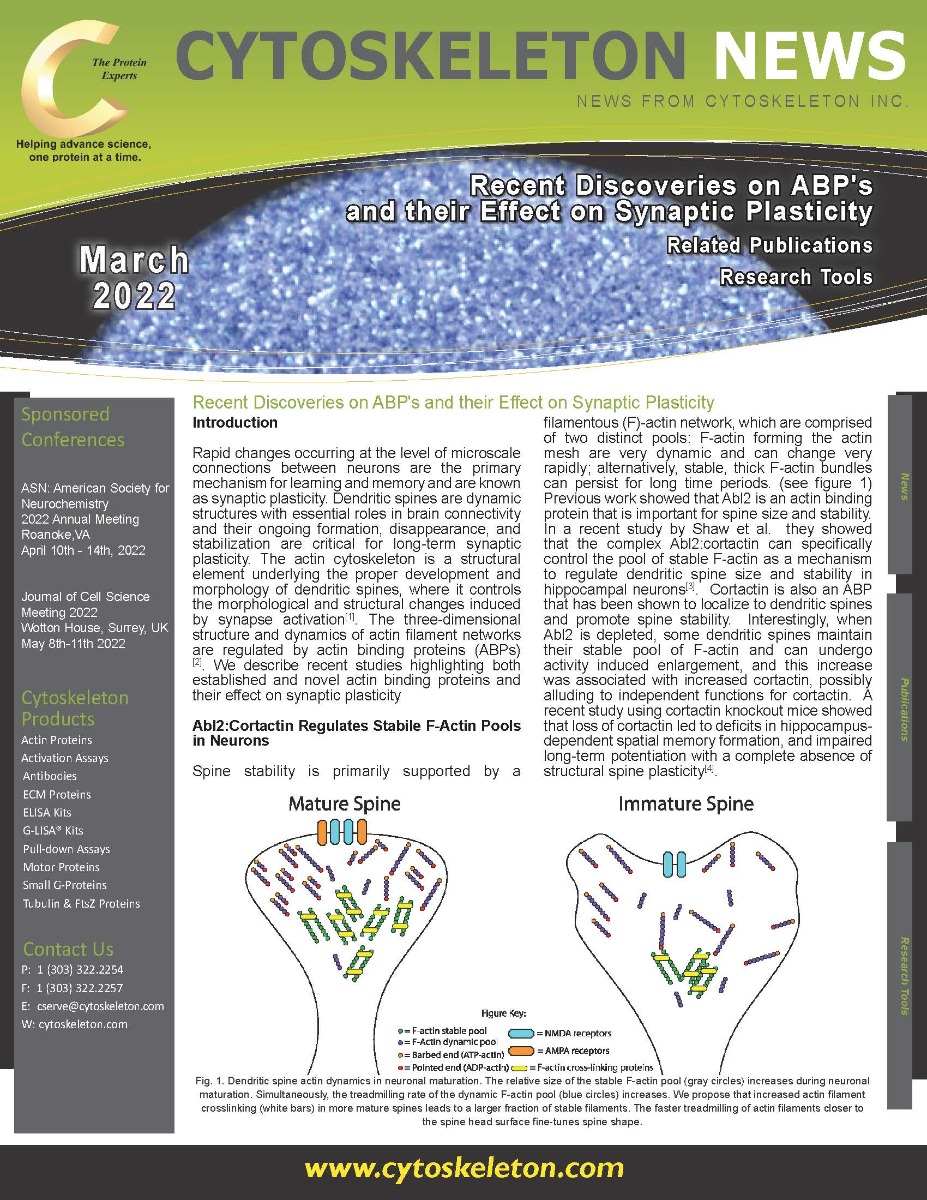 Synaptopodin is a critical component of the spine apparatus, and mice deficient in this protein has deficits in synaptic plasticity and show impaired spatial learning[5].  However, its impact on dendritic spines is also attributed to its ability to binding actin which affects its stability[6].  It has previously been shown to impact short-term effects on spine geometry due to its regulation of the cytoskeleton.  Recent work by Thomas Deller’s group determined that synaptopodin mediates long-term survival of dendritic spines as well[7].  Utilizing 2-photon time-lapse imaging they determined that spines with synaptopodin survived longer than spines of equal size where synaptopodin was absent.  Interestingly, spines that underwent pruning had their levels of synaptopodin depleted before disappearing.  This study adds to the known function of this actin modulating protein in the regulation of dendritic spines.

While several APBs have been implicated as positive regulators of LTP and spine stability, there is much less known about proteins that function as inhibitory levers of LTP.  Work by the Park group identified Cyclin Y as a novel ABP that affects LTP in an activity dependent manner[8].  In their current study, they determined that Cyclin Y, under basal conditions, promoted F-actin formation and increased spine density[9]. This increase in F-actin was achieved in part through blocking activation of cofilin.  However, in response to glycine induced LTP, Cyclin Y suppressed actin dynamicity which suppressed new spine formation and blunted spine enlargement.  Interestingly, the group showed that glycine-induced LTP resulted in significant disappearance of Cyclin Y in spines further suggesting it may have an inhibitory function in LTP.  Their data suggests that this novel ABP interferes with the cofilin-actin pathway to modulated structural and functional LTP in hippocampal neurons.

ABPs have a multitude of different functions that impact actin structure and dynamicity which is critical for dendritic spine shape and stability.  The numerous ABPs have subtle, but substantial effects on synaptic plasticity through their reorganization of connections between neurons.  There are now many examples of how ABP dysfunction promote neuronal diseases, such as this study where knockout of the drebin ABP resulted in enhanced seizure like events in mice lacking the protein[10]. It will be of great interest to understand the delicate interplay between these ABPs and how they fine tune actin to control learning and memory, and if they can be targeted to treat neuronal diseases.