Disturbances in the Filamentous Actin Cytoskeleton Appear in Alzheimer’s Disease

Alzheimer’s disease (AD) is a neurodegenerative disorder that gradually leads to cognitive decay and is accountable for most dementia cases in the elderly (1). Globally, 50 million people are estimated to have dementia, of which 50-70 % of cases are credited to AD (2,3). Representative features of this disease are progressive memory loss and functional weakening (4). A premature and ongoing reduction of synapse function is considered the main cause of this cognitive deterioration (5). The classic hallmarks of AD entail two dysfunctional proteins that are considered responsible for synaptic failure: β-amyloid (Aβ) and tau. Emerging AD studies show disturbances in the filamentous (F-) actin cytoskeleton of neurons (6). In this brief review, we describe how cytoskeletal disturbances in F-actin affect the development of AD.

Abnormal regulation of cofilin in actin dynamics within the cell, including rod formation, has been studied for decades in diseases such as AD and other neurodegenerative diseases (7). In AD, irregularities in F-actin include dephosphorylation of the actin-binding protein cofilin and the development of rod-shaped cofilin-saturated actin filament rods. These rods accrue inside neurites, in parallel with phosphorylated tau and plaque accumulation; ultimately, disruption of microtubules leads to synaptic dysfunction (8–10). Furthermore, mouse models of AD have shown that lowering total cofilin expression, interrupting cofilin activation by interfering with upstream components, or applying cell-permeant peptides that prevent cofilin dephosphorylation all lessen rod pathology and reverse cognitive impairments (11–13).

Rods are often detected in the early phases of neurodegenerative diseases and have been strongly associated with loss of synaptic connections and cognitive deterioration with concomitant loss of neurons (14,15). F‐ actin rods form in several cells types in response to ATP exhaustion or treatment with 10% DMSO (10,16) and, particularly, in neurons in response to oxidative stress (9,11), excitotoxic glutamate (17,18), and Aβ1-42 (19,20). Rod characterization has been typically performed by assessing their immunoreactivity to antibodies against both cofilin and actin, and after adequate fixing, they are refractory to phalloidin (7,9). Importantly, rod-like cofilin immunological staining is detected in close proximity to amyloid plaques in the human AD brain (9).

The molecular pathways that drive rod formation have only been partially unveiled. ATP consumption induces the discharge of the cofilin phosphatase chronophin from the chaperone Hsp90 (21,22), which leads to chronophin stimulation and cofilin dephosphorylation. After silencing chronophin in neurons using siRNA, rod formation due to ATP-depletion was decreased but not eliminated. This suggests that chronophin is mechanistically important, but additional phosphatases may provide compensation as well (21,23). On the other hand, Cdc42, a Rho GTPase involved in cofilin phosphorylation and actin polymerization (24,25), was subject to knock-out and inhibition activity analysis. Notably, after both interventions, a measurable decrease in neuronal rod formation was detected. In conclusion, Cdc42 may function as a regulator of actin rod formation (23,26). 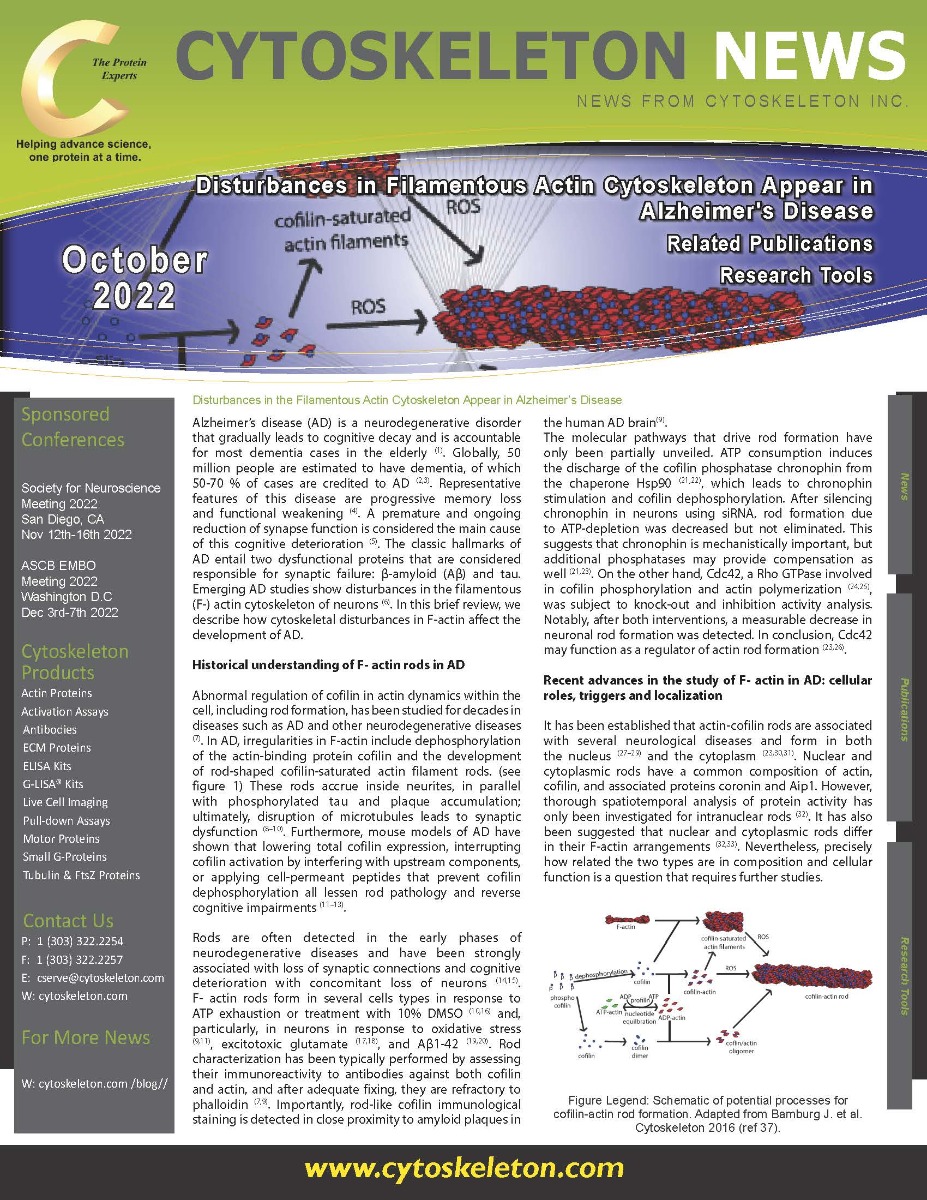 Recent advances in the study of F‐ actin in AD: cellular roles, triggers and localization

It has been established that actin-cofilin rods are associated with several neurological diseases and form in both the nucleus (27–29) and the cytoplasm (23,30,31). Nuclear and cytoplasmic rods have a common composition of actin, cofilin, and associated proteins coronin and Aip1. However, thorough spatiotemporal analysis of protein activity has only been investigated for intranuclear rods (32). It has also been suggested that nuclear and cytoplasmic rods differ in their F-actin arrangements (32,33). Nevertheless, precisely how related the two types are in composition and cellular function is a question that requires further studies.

Regulation of actin structures through actin dynamics is essential in many critical cell functions. Polymerization of actin is an energy-demanding process that can consume a significant portion of the available cellular ATP (7,34). A current, working hypothesis is that actin-cofilin rods appear as a cellular strategy to lower energy intake by discontinuing steady actin turnover during times of specific cell stress. This idea is supported by findings that metabolism and actin remodeling are interdependent processes (35). Furthermore, Ishikawa-Ankerhold et al. (7) designed a model to analyze cytoplasmic actin rod assembly in response to energy modulation. They discovered that cytoplasmic acidification promotes the accumulation of actin-cofilin rods, which implies that a local decrease in pH could be the source of cytoplasmic rod materialization.

Actin processes hold a critical role in the regulation of basic cell functions. Apart from AD, numerous neurological degenerative disorders, such as Parkinson’s, Huntington’s, and fronto-temporal dementia are also known for the accumulation of protein deposits in particular areas of the brain (36). In particular, abnormalities in cerebral F-actin in the shape of cofilin-actin rods have also been detected in Down syndrome (8). These cytoskeletal-related irregularities could contribute to dendritic spine malfunction and other pathological features, including neurofibrillary tangles (8). However, more studies are needed to better understand the mechanisms that underlie rod accumulation in the cytoplasmic or nuclear space, how this accumulation is regulated by physiological/pathological factors, and whether therapeutic intervention to reverse rod formation is sufficient to treat AD.