In eukaryotic organisms, there is a multitude of specialized, differentiated cells that are formed by specific gene programs. Maintaining the fidelity of these specific gene programs is critical for proper cell function and is achieved through regulatory mechanisms to ensure stable patterns of gene activation and repression; one such process is the packaging of genomic DNA to control its accessibility. In eukaryotes, genomic DNA is wound around an octamer of the four core histones to form nucleosomes, which creates a higher-order, closed chromatin structure (reviewed in [1]) .“Closed chromatin” in this context is defined by a lack DNase hypersensitivity and indeterminate histone modification pattern. In this closed state, chromatin structure becomes an obstacle for eukaryotic transcription by impeding the interaction of RNA polymerase machinery and most transcription factors (TFs). Below we discuss mechanisms in the form of pioneer transcription factors, histone modifications, and recently identified actin-dependent mechanisms that regulate chromosome accessibility and gene regulation during cellular reprogramming. 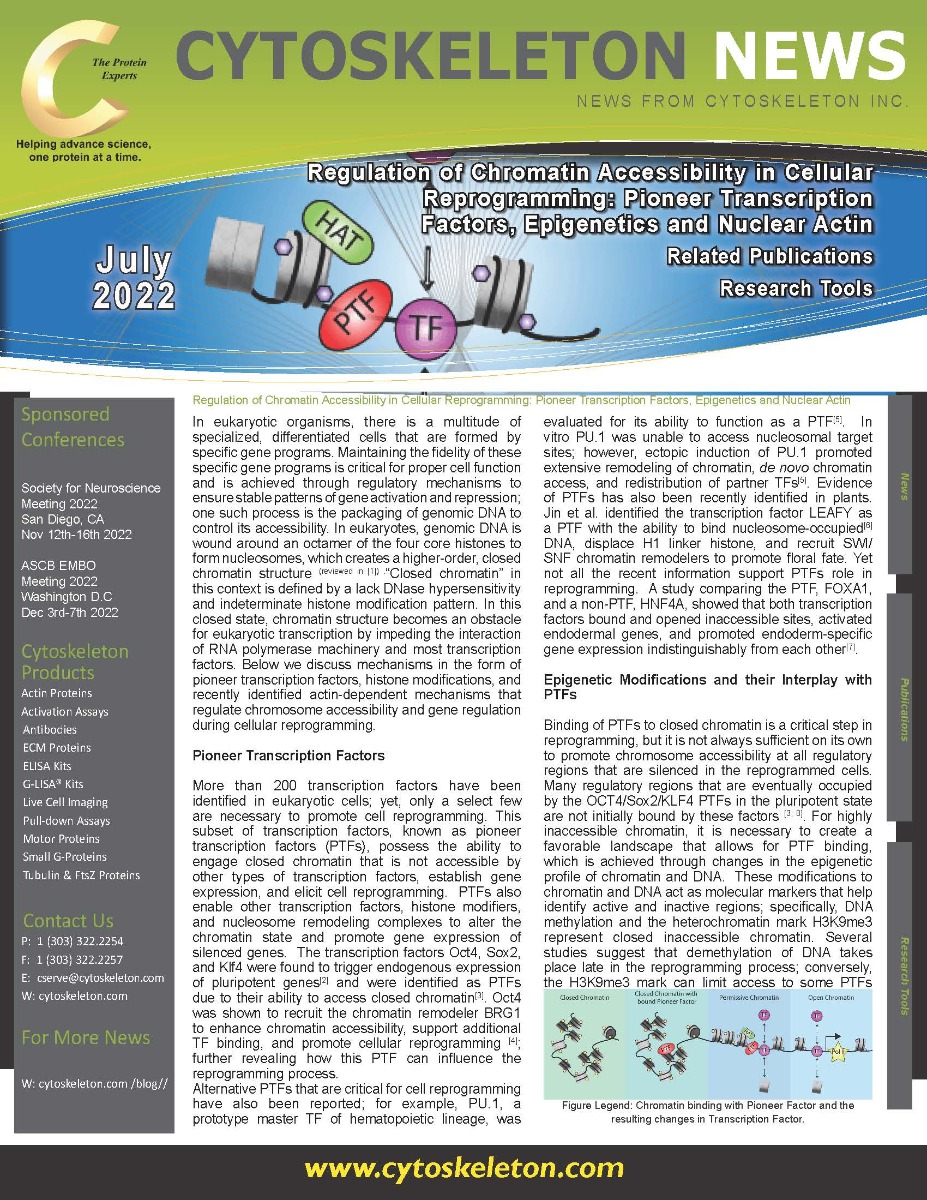 Epigenetic Modifications and their Interplay with PTFs
Binding of PTFs to closed chromatin is a critical step in reprogramming, but it is not always sufficient on its own to promote chromosome accessibility at all regulatory regions that are silenced in the reprogrammed cells. Many regulatory regions that are eventually occupied by the OCT4/Sox2/KLF4 PTFs in the pluripotent state are not initially bound by these factors [3, 8]. For highly inaccessible chromatin, it is necessary to create a favorable landscape that allows for PTF binding, which is achieved through changes in the epigenetic profile of chromatin and DNA.  These modifications to chromatin and DNA act as molecular markers that help identify active and inactive regions; specifically, DNA methylation and the heterochromatin mark H3K9me3 represent closed inaccessible chromatin. Several studies suggest that demethylation of DNA takes place late in the reprogramming process; conversely, the H3K9me3 mark can limit access to some PTFs (reviewed [9]). The transcription factor ESRRB has been shown to promote demethylation and nucleosome displacement as a means to chromatin accessibility [10].  Cells unable to demethylate chromatin in regions with pluripotency-critical genes eventually fail to complete reprogramming[11].
Epigenetic remodeling of histones increases chromatin accessibility and subsequent gene activation (reviewed in [12]); for example, studies have revealed that acetylation loosens the interaction between DNA and nucleosomes[13, 14], which makes acetylated chromatin more accessible to transcription factors[15]. Enhancers are highly accessible regions decorated with active histone modifications (e.g., H3K27ac), but activation of enhancers is preceded by priming via the action of PTFs.  In a recent study, a triple mutant for Nanog, Pou5f3, and Sox19b in zebrafish was made, and investigators determined that these transcription factors promote chromatin accessibility through regulating acetylation of enhancer regions[16].
Nuclear Actin Regulates Chromatin and PTFs
Accumulating evidence indicates that nuclear actin is involved in cellular differentiation and development in several different cell types (reviewed in [17]). Nuclear actin was found in several RNA polymerase complexes, a few chromatin remodeling complexes and also plays an important role in regulating silenced genes during cellular differentiation[18, 19]. Miyamoto et al. showed that perturbation of polymerized states of nuclear actin affects transcriptional reprogramming of Oct4 through altering its expression[20]. Additionally, they found that the knockdown of nuclear WAVE1, an actin binding protein, causes defects in transcriptional reprogramming[21]. In support of these results, forced expression of nuclear actin in Hela cells resulted in altered expression of approximately 2000 genes, including Oct4[22].
Recently, it was reported that MKL1, a key transcriptional co-activator of many actin cytoskeletal genes, regulates genomic accessibility and cell fate reprogramming[23]. The group found that sustained MKL1 expression at a level seen in typical fibroblasts yields excessive actin cytoskeleton, and reduced global chromatin accessibility; in opposition, the MKL1-actin pathway weakened during somatic cell reprogramming by pluripotency transcription factors[23]. Interestingly, another group reported that β-actin depletion affected induction of several adipogenic genes during transcriptional reprograming due to reduced expression of the PF Cebpa[24]. They determined that actin-dependent reduction of Cebpa expression correlates with decreased chromatin accessibility and loss of chromatin association of the ATPase Brg1[24]. In both examples, nuclear β-actin pool is important to promote a more differentiated cellular state.
Summary
Cellular reprogramming produces a seismic shift in gene expression that entails activating pluripotency genes and silencing others that were utilized in the differentiated cells.  This process of reprogramming must be tightly regulated to prevent unregulated expression of proteins that can promote uncontrolled cell replication as seen in diseases like cancer. While there is significant evidence showing that PTFs play a critical role in cellular reprogramming there is significant crosstalk with other mechanisms like epigenetic regulation and involvement of key structural proteins like actin.  There is still much to learn about the mechanisms, binding partners, and regulatory factors that PTFs to regulate gene programs in the context of cellular remodeling.