The small G-protein RhoA, functions as a molecular switch through interactions with GTP and GDP, to regulate an array of cellular processes including cell proliferation, cell shape, and cytoskeletal regulation.  Seminal studies by Ridley and Hall showed that RhoA was activated by serum stimulation[1]; additionally, it is now appreciated that RhoA is a critical signaling mediator for some G protein-coupled receptors (GPCRs) (reviewed in [2]). GPCR signaling plays a fundamental role in cardiac physiology, and dysregulation of these signaling mechanisms has deleterious effects on many cardiovascular diseases including heart failure (reviewed in [3]).  These pathways are so critical in cardiac disease, that drugs that target GPCRs are considered the standard of therapy for many cardiovascular diseases.

Due to its role in GPCR signaling, many studies have investigated RhoA’s effect on cardiac pathology.  Studies in chick embryos identified RhoA as being upregulated in the developing heart and knockdown of RhoA with siRNA had deleterious effects on cardiac tube fusion implicating it as a critical player in cardiomyocyte proliferation and maturation [4].  Initial RhoA-cardiac-specific overexpression studies in mice led to pronounced dilation of the left ventricular chamber and ultimately heart failure [5].  Conversely, the Brown group did a follow-up study with an active RhoA, cardiac-specific “low” expression mouse model and found that it did not exhibit enhanced cardiomyopathy and interestingly was protective against ischemia/reperfusion injury.  Work by Lauriol et al. showed that loss of RhoA specifically in cardiomyocytes reduced cardiac fibrosis while also exacerbating chronic stress-induced heart failure, providing further evidence of its complex role in heart disease [6].  Below, we discuss the mechanisms by which RhoA affects cardiac pathology.

In the classical paradigm, GPCR stimulation via defined ligands such as S1P and LPA, activate heterotrimeric guanine nucleotide-binding proteins (G proteins), G12/13.  These activated G proteins promote nucleotide exchange of RhoA through activation of p115 RhoGEF [7]. Activated RhoA utilizes downstream kinases such as Rho-associated, coiled-coil-containing protein kinases (ROCK), and others to activate four key transcription factors AP-1, NF-Kb, YAP, and MRTF-A.  Transcription factor activation leads to coordinated upregulation of several gene programs that can affect a multitude of cellular processes (reviewed in [2]).  The critical components of this signaling pathway have been shown to play important roles in cardiac pathology oftentimes in a RhoA-dependent manner (reviewed in [8]).

In particular, the kinases ROCK1 and ROCK2 have been shown to regulate cardiac hypertrophy which is an adaptive response to pressure overload that can lead to heart failure.  Inhibition of ROCK signaling with chemical inhibitors was protective against pressure overload-induced hypertrophy and fibrosis [9]. Interestingly, depletion of ROCK1 using a haplo-insufficient mouse model showed that this kinase is important for the development of cardiac fibrosis, but not hypertrophy in pressure overload models [10]. More recently, cardiac-specific ROCK1 or ROCK2 knockout mice were studied in a transverse aortic constriction model.  ROCK1 depletion promoted pressure-overload-induced cardiac hypertrophy, fibrosis, and oxidative stress; conversely, ROCK2 depletion blunted cardiac hypertrophy and reduced oxidative stress [11]. A complementary study also found opposing roles for ROCK1 and ROCK2 in cardiomyocytes and identified autophagy and fibrosis of the heart as downstream mechanisms differentially regulated by these kinases [12].  More recently, in a cardiomyocyte hypoxia/reoxygenation model, ROCK1 was shown to be regulated by miRNA-145-5p and its expression correlated with apoptosis [13].  Similarly, in an isoproterenol-induced cardiac hypertrophy model ROCK1 was identified as a pro-hypertrophy factor and the drug Protocatechuic acid was shown to reduce ROCK1 levels as a mechanism to attenuate isoproterenol-induced cardiac hypertrophy [14].  Clearly, the role of ROCK kinases in cardiac hypertrophy is complex similar to RhoA and may depend on a combination of factors. 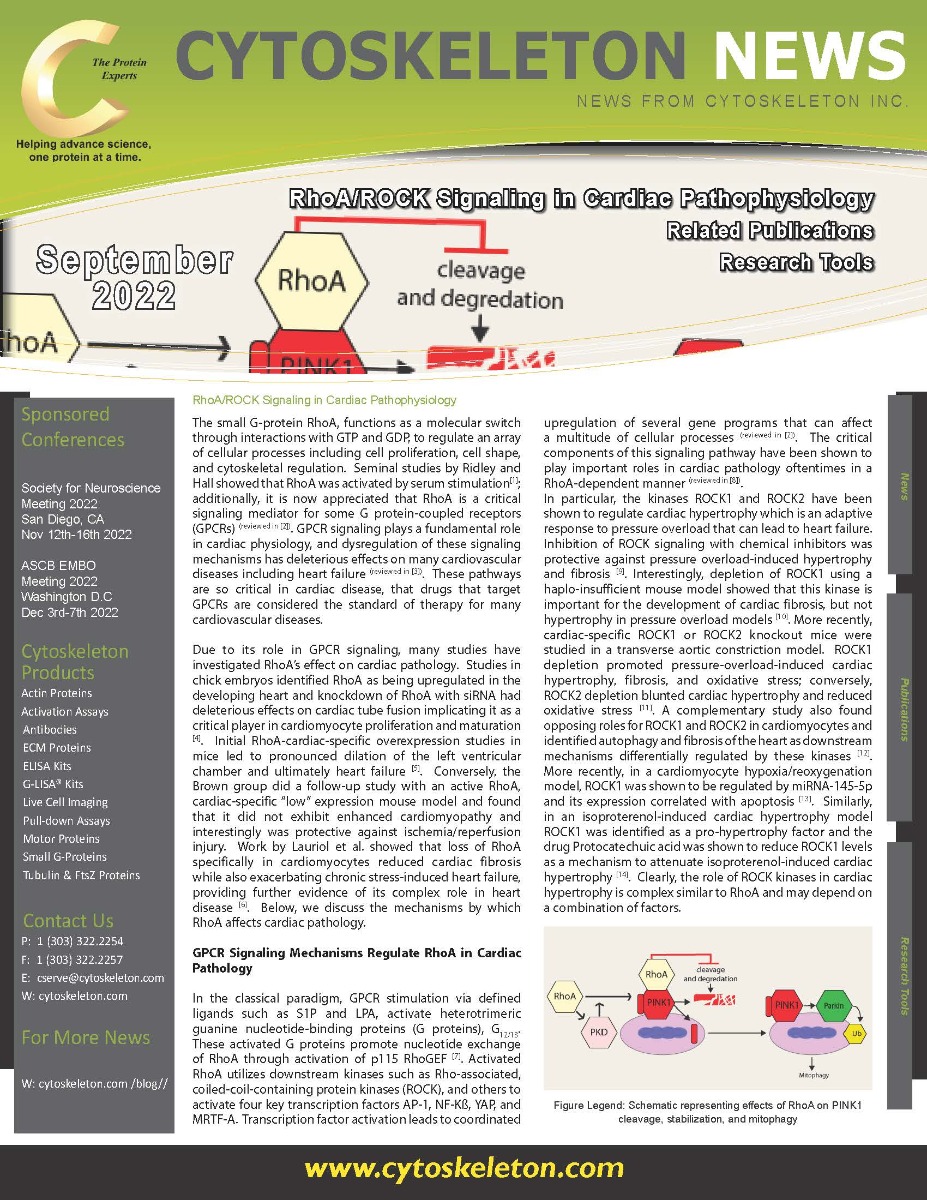 Above: Schematic representing effects of RhoA on PINK1 cleavage, stabilization, and mitophagy

Oxidative stress can have a profound effect on cardiac pathology, and can lead to dysfunction and cell death of cardiomyocytes during ischemic events; therefore, mitochondrial dysfunction in cardiomyocytes is thought to play a critical role in the progression of cardiovascular disease (reviewed in [15]).  An early study linked RhoA to the mitochondria in cardiomyocytes; whereby, overexpression of RhoA led to apoptosis through a Bax and caspase 9-dependent fashion [16].   Newer physiological studies identified an S1P-RhoA-PKD1 axis that is cardioprotective against ischemia/reperfusion injury through mitochondrial-dependent mechanisms [17].  Additionally, RhoA was shown to regulate mitochondrial fission in cardiomyocytes in a ROCK and dynamin-related protein 1-dependent fashion [18].  Recent work by the Miyamoto group showed that RhoA may also protect cardiomyocytes through its regulation of mitophagy [19].  Specifically, they showed That RhoA promoted PINK1 stabilization and accumulation at the mitochondria in combination with the recruitment of Parkin to the mitochondria ultimately resulting in an upregulation of mitophagy.  They found that increasing RhoA levels in vivo enhances mitophagy events during myocardial infarction which results in smaller infarct size.  Interestingly, RhoA localizes to the mitochondria, interacts with PINK1, and prevents its cleavage as the mechanism for enhancing mitophagy (see Figure 1).

RhoA is a critical signaling molecule that regulates a vast array of processes; thus, it is not surprising that it plays a complex role in heart disease where it can be both cardio-protective as well as pathological.  Keys studies suggest that RhoA levels, specific downstream targeting, and even the specific pathologic insult can all modulate RhoA’s impact on cardiac pathology; thus, the story of RhoA in these diseases are still not fully understood.  Cytoskeleton Inc. offers several RhoA tool and reagents to aid investigators in their research to help expand our knowledge in the RhoA Signaling field.