Mitochondria are the chief power plants for eukaryotic cells and generate ATP through oxidative phosphorylation. Many debilitating and lethal disease are associated with abnormal cristae morphologies in the mitochondria; however, a complete elucidation of cristae morphology-directing complexes such as the Mitochondrial contact site and Cristae Organizing System (MICOS) is lacking. Stephan et al. used extensive microscopy and molecular biology tools to identify the distinct roles that Mitochondrial Dynamin Like GTPase (OPA1), F1FO-ATP synthase, and MICOS subunits Mic60 and Mic10 exert on cristae biogenesis and overall mitochondrial morphology. To characterize the nominal structure of HeLa mitochondria, SNAP-tagged chrome c oxidase subunit 8A (COX8A) conjugated to SiR-BG was employed. Investigators observed a predominance of lamellar cristae interspaced by compartments containing mitochondrial nucleoids, and an overall structural heterogeneity of the mitochondrial inner membrane. Systematic CRISPR/Cas9 knockout of MICOS subunits was used to identify the roles of MICOS subunits, including Mic60, which also resulted in a near complete reduction of Mic10, 13, 19, and 26 with incomplete yet strongly reduced levels of 25 and 27. Knockout of Mic19 recapitulated these findings while knockout of Mic10 or 13 did not; although, loss of these Mics were associated with a strong reduction in other Mic subunits. These data suggest that specific subunits, such as Mic60, play central roles in the formation of MICOS. Morphologically, Mic60-KO cells exhibited fragmented mitochondrial networks that were spherically shaped and displayed highly disordered cristae. Modulation of Mic10 levels revealed that the distribution of Mic60 is linked to Mic10 levels in a concentration-dependent manner, and relative to wild-type, affected the overall organization of the mitochondria. The loss of Mic10 and/or Mic60 resulted in severely aberrant cristae membranes appearing onion-shaped or longitudinal, respectively, rather than the perpendicular projections, suggesting that Mic10 and 60 together control cristae architecture. The inner mitochondrial membrane contributes to the shape of cristae and is influenced by F1Fo-ATP synthase dimers. When dimer-forming ATP5ME, a subunit of F1Fo-ATP synthase, was perturbed through RNAi, mitochondria exhibited a reduced number of lamellar cristae with only a modest change in morphology; however, Mic60 distribution was altered. This suggests F1Fo-ATP synthase works chiefly in concert with Mic60 to stabilize cristae architecture. OPA1-deficient mitochondria also appeared to influence Mic10, with knock-on effects that influenced the distribution of Mic60, appearing to work in conjunction with Mic10 to stabilize tubular CJs. Altogether, these data suggest that mitochondrial cristae biogenesis is heavily shaped by a complex interplay between MICOS, F1FO-ATP synthase, and OPA1. BG-SiR was an essential reagent in this study as investigators sought to identify the localization of Mic subunits in the mitochondria.  Cytoskeleton offers several fluorogenic, cell permeable BG-SPY substrates for these types of applications. 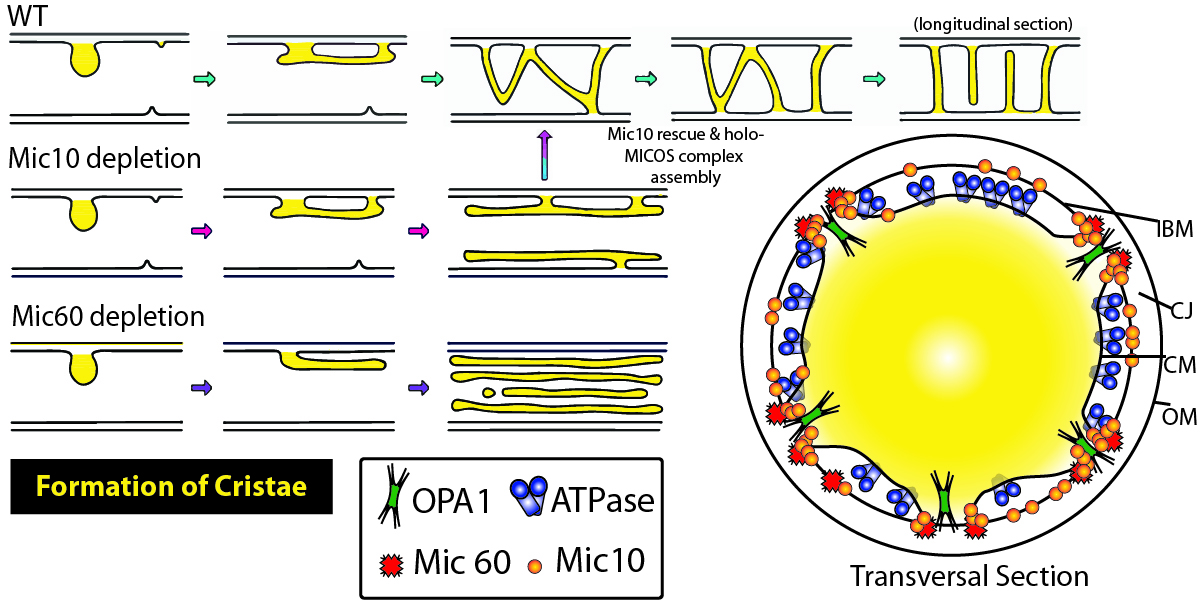 Link to the Citation: