Post-translational modification (PTM) includes more than 200 diverse, covalent alterations that alter a protein’s behavior. Phosphorylation, glycosylation, and acetylation are the most common PTMs, resulting from the enzymatic addition of phosphate, glycans, and acetyl groups, respectively. PTMs may also involve much larger additions to the protein backbone. For example ubiquitination tacks on the regulatory protein ubiquitin, and SUMOylation joins the protein of interest with one of several Small Ubiquitin-like Modifier proteins.

Phosphorylation, the most intensely-studied PTM, plays critical roles in cellular homeostasis and often serves as a type of on-off switch for active proteins. Acetylation is another PTM with profound effects on such cellular processes as cell cycle, apoptosis, DNA repair, and signal transduction.

Cancer is a process through which cells are reprogrammed, through several layers of regulation, to fulfill the tumor’s need to migrate and proliferate.[1] Recent research has revealed significant layers of regulation controlling cell signaling and metabolic pathways to which PTMs contribute. Moreover the crosstalk between and among PTMs, as well as deregulation of PTM-PTM interactions, has been implicated in the pathogenesis of several diseases, including many cancers.[2]

Over- or under-expression of acetylation, glycosylation, phosphorylation, methylation, neddylation, prenylation, SUMOylation, and ubiquitination occurs in numerous proteins associated with cancer, including GPCR, p53, DAPK1, NF-kB, and others.[3]

A wealth of information in fact reveals that common PTEN PTMs (phosphorylation, ubiquitination, SUMOylation, acetylation, and oxidation) dynamically alter the protein’s stability, activity, localization, and inter-protein interactions. Moreover defective post-translational regulation of PTEN, which occurs more frequently in cancerous vs. normal cells, leads to loss of PTEN activity and is one of the most common mutations in human cancers.[1]

Similarly, the transcription factor p53 regulates the expression of up to 3000 genes involved in apoptosis, senescence, cell cycle arrest, DNA repair, apoptosis, tumor microenvironment, autophagy, and tumor invasion and metastasis.[2],[3] p53 regulation occurs through as many as fifty PTMs, among which ubiquitination, phosphorylation, and acetylation appear to be the most significant (Figure 1).[4],[5]

The Wnt/β-catenin signaling pathway regulates cellular proliferation, differentiation, and migration during embryonic development, and participates in adult cell homeostasis. This pathway is regulated through PTMs, and its dysregulation has been implicated in several illnesses, including degenerative diseases and cancer.[6]

As with most proteins, the Wnt signaling and its significant molecular actors are regulated by multiple PTMs, with individual PTMs capable of both enhancing and inhibiting activity, depending on the amino acid residue on which it acts. In addition, the influence of PTMs may be cooperative or mutually exclusive. Understanding these complex, diverse, and interoperating regulatory processes, with the goal of treating and diagnosing human cancers, requires sensitive analytical methods and reagents, a topic we will cover in a subsequent article.

The pathophysiology of heart disease often involves the death or dysfunction of cardiomyocytes, whose contractile abilities depend on the proper functioning of ion channels and pumps, cytoskeletal proteins, and receptors. Many of the relevant proteins are regulated through PTMs, which rapidly but profoundly affect the activity of affected proteins and hence the cellular responses.[1]

For example, the trimeric troponin complex, which is controlled by calcium, regulates sarcomere contraction. One component of the complex, cardiac troponin I (cTnI), serves as a biomarker of heart disease due to its degradation and appearance in the blood. Moreover, phosphorylation of cTnI is altered in human heart disease.[2] Studies have uncovered other PTMs on cTnI, including acetylation, oxidation, cleavage,[3] and methylation, with implications for diagnosis and treatment of cardiomyopathies, such as myocardial infarction and heart failure.[4]

PTMs influence cellular processes, and hence the etiologies of numerous diseases, through their modulation of a protein’s physical and chemical properties, folding, conformation, stability, and activity -- all of which must exist within narrowly-defined states for normal functioning. The number of sites where PTMs may occur, and the diversity of possible post-translational changes, transforms a proteome originating from about 21,000 genes into millions of proteins with unique functions and activities.[1],[2]

Our understanding of the role of PTMs in disease is still very much focused on the local effects of PTMs, their proximity to pharmaceutical binding sites, and their involvement in protein-protein interactions.[3] Those limitations, however, have not stopped drug developers from designing both protein and small-molecule drugs that enhance or disrupt the activity of PTMs or the proteins carrying them. Many PTM-disrupting or -activating drugs belonging to several classes have been approved, and many more are in development (See table 1). 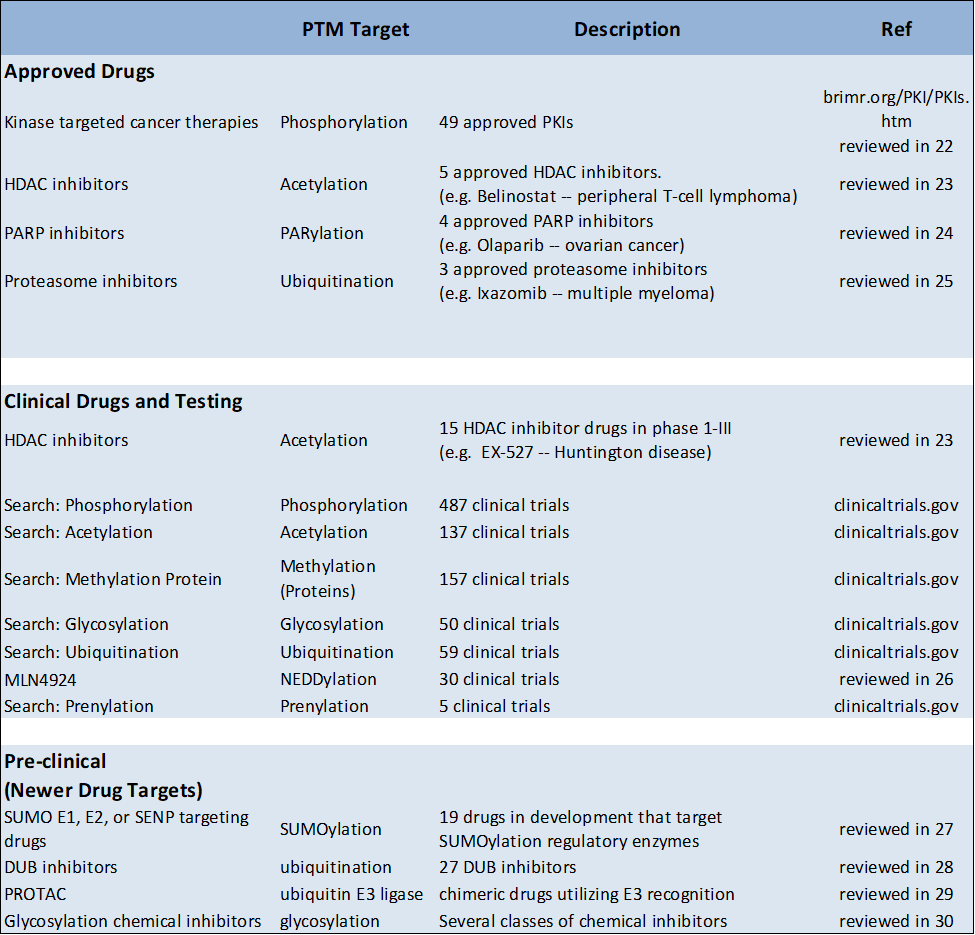 Table 1: PTM-targeted drugs approved, in clinical, and in pre-clinical testing

PTMs govern a broad swath of cellular regulatory events, many of which are implicated in disease. This brief introduction provides a small sample of the significance of PTMs in this context, and hints at possible future directions for the development of drugs and diagnostics based on PTM analysis. There is every reason to expect that as the roles of PTMs in disease become better understood, new small-molecule and biologic drugs will emerge that are safer and more effective than the examples we have provided. That understanding, however, depends on the availability of reagents and analytics that are up to the task of unraveling the complex and often interrelated activities of PTMs in both healthy and diseased cells.