The acetylation post-translational modification (PTM) of tubulin occurs primarily on the lysine at position 40 (Lys40) on the alpha-tubulins of assembled microtubules (MTs). The predominant alpha-tubulin acetyltransferase is TAT1/MEC-17. Deacetylation of acetylated tubulin is mediated by histone deacetylase 6 (HDAC6) or SIRT2, the mammalian homolog of silent information regulator 2/sirtuin type 2. Lys40 has long been considered the sole site of acetylation and while other lysine residues on alpha-tubulin and beta-tubulin are targets for acetylation based on proteomic analyses, functional studies focus on the Lys40 residue within the MT lumen. This newsletter discusses tubulin acetylation, MT stability, and the functionality of acetylated MTs (Fig. 1). 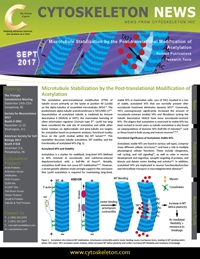 Acetylation is a marker for stabilized, long-lived MTs (defined as MTs resistant to nocodazole- and colchicine-induced depolymerization) with a half-life of hours. Notably, acetylation itself does not cause MT stabilization. However, a recent genetic ablation study strongly supports the conclusion that Lys40 acetylation is required for maintaining long-lived, stable MTs in mammalian cells. Loss of TAT1 resulted in a loss of stable, acetylated MTs that are normally present after nocodazole treatment eliminates dynamic MTs. Conversely, TAT1 overexpression significantly increased the amount of nocodazole-resistant (stable) MTs and fibroblasts lacking the tubulin deacetylase HDAC6 have more nocodazole-resistant MTs. The dogma that acetylation is restricted to stable MTs has been revised in recent years as tubulin acetylation is also found on subpopulations of dynamic MTs (half-life of minutes), such as those found in both young and mature neurons.