UBE2L3, a Partner of MuRF1/TRIM63, Is Involved in the Degradation of Myofibrillar Actin and Myosin

Severe muscle wasting, cachexia, occurs in many diseases such as heart failure and cancer, and is a significant contributor to morbidity and even mortality. Skeletal muscle proteolysis, driven by the ubiquitin proteasome system, is a primary mechanism that facilitates muscle wasting. A comprehensive understanding of the ubiquitin enzymes responsible for protein turnover of cytoskeletal proteins such as actin are not fully understood; however, the E3 ligase, MuRF1, has been shown to target both alpha-actin and myosin heavy chain proteins. In this study, Peris-Moreno et al. sought to uncover the E2 ubiquitin conjugating enzyme responsible for cytoskeletal protein targeting and identified the UBE2L3 enzyme as an essential component of the UPS that controls cytoskeletal protein turnover. Cell myotubule models using C2C12 cells was treated with dexamethasone to promote a catabolic state and was used in subsequent studies to define the role of UPS proteins to regulate MHC IIa and a-actin levels.  Interestingly, depletion of the e3 ligase MuRF1 using shRNA had no measurable effect on cytoskeletal protein levels, while depletion of UBE2L3 resulted in a significant increase in both a-actin and MHC IIa protein.  This suggests that the UBE2L3 may have an important role in cytoskeletal protein turnover, and that additional E3 ligases may be compensating for the loss of MuRF1. The group then depleted or overexpressed UBE2L3 in Tibialis anterior muscle tissue and measured muscle atrophy in response to dexamethasone. Similarly, to the cell model findings, depletion of UBE2L3 enhanced myofiber cross sectional area and promoted large fibers/ hypertrophy, while overexpression of UBE2L3 had the opposite effect. The group then used interactomic approaches to investigate the interaction between these UPS proteins and their cytoskeletal substrates.  They first investigated the binding affinities between MuRF1 and the following proteins UBE2L3 (kd 42.2 nM), F-actin (kd 46.7 nM), and G-actin (Kd 450 nM), which was interesting because they found the MuRF1 protein bound much stronger to F-actin vs G-actin. They also looked at MuRF1 interaction with the soluble portion of myosin, heavy meromyosin (Cat. # MH01) and found that it had a kD of 8nM.  They then investigated whether the cytoskeletal proteins altered the interaction between MuRF1 and UBE2L3, and found that the addition of cytoskeletal proteins trended towards decreasing binding between the UPS proteins, which they partially explained through limitations of the in vitro system.  However, when utilizing a yeast-three-hybrid system the group recapitulated the finding that MHCIIa interfered with MuRF1 and UBE2L3 interaction. Collectively, these studies identified UBCE2L3 as a UPS protein involved in cytoskeletal protein turnover.  Cytoskeleton’s alpha-actin (Cat. # AKL99) and heavy meromyosin (Cat. # MH01) was important for defining the complex interaction between these UPS and cytoskeletal proteins. 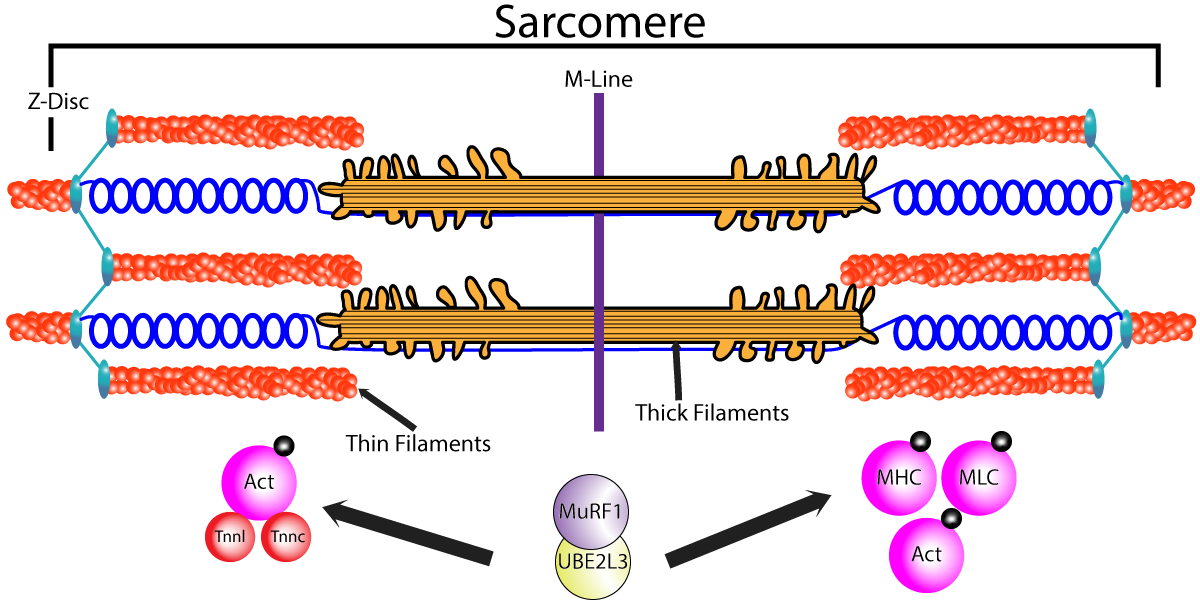 Above: MuRF1 and UBE2L3 a responsible for the coordinated breakdown of both thick and thin filament occurring during catabolic states in skeletal muscle.