Microglia are the primary immune cells, the so-called professional phagocytes, of the mammalian brain. Microglia continually scan the entire brain in their resting state and when neurotoxic pathogens and damaged cellular machinery are detected, they are activated to eliminate them1-2 (Fig. 1). In healthy neurons, microglia also contribute to essential cellular functions such as neurogenesis, neurodevelopment, and neural plasticity3-4. Of similar importance are the roles microglia have in neurodegenerative diseases characterized by aggregates of pathogenic, misfolded proteins such as Parkinson’s disease (PD; Lewy bodies) and Alzheimer’s disease (AD; Aβ plaques). Microglia-mediated neuroinflammation is a common pathophysiology in PD and AD human brains, as well as in in vivo animal model brains 1-2,4-9. Moreover, recent genetic and transcriptomic studies revealed microglia-associated signaling cascades as critical players in AD pathogenesis1-7. This newsletter discusses microglia activation and neuroinflammation in PD and AD.

PD is characterized by a loss of dopamine (DA) neurons in the substantia nigra pars compacta, a corresponding loss of dopaminergic (DAergic) terminals throughout the basal ganglia, and Lewy bodies which are composed primarily of intracellular α-synuclein aggregates. Lewy bodies are a pathophysiological hallmark of PD and trigger microglia-mediated neuroinflammation, which itself is another neuropathological correlate of PD1,2,8,10 (Fig. 1). In the brains of PD patients, Lewy body neurites are associated with activated microglia and α-synuclein deposits are correlated with inflammatory markers. In vitro cell culture and in vivo animal models also demonstrate a relationship between α-synuclein aggregates and microglial activation2,8,10. 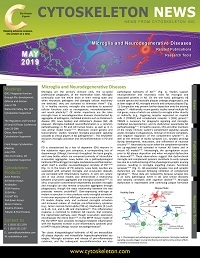