Actin is a well-characterized, abundant, and highly conserved cytoskeletal protein. Actin was first discovered in 1942 by Albert Szent-Gyorgyi and Bruno Straub, and even during these early studies several observations were made about its dynamic properties which allow it to shift between monomeric (G-actin) and polymeric (F-actin) states(reviewed in 1). Actin’s dynamicity, which is vital for its regulation of most cellular processes, is controlled by many internal and external cues that are facilitated by actin binding proteins (ABPs), signal transducers, and others. Actin has well-established roles in muscle contraction, vesicle movement, cell motility, and many other biological processes. Without a doubt actin is an essential protein without which eukaryotic cell viability would be inefficient if not impossible; yet, for many scientific investigators actin is best known as a loading control for western blots. Here we provide three examples of actin’s critical role in several novel cellular processes, which shines a light on the ever-expanding functionality and importance of this unique protein.

Although controversial for several decades, its now accepted that actin does reside in the nucleus and has functional roles in gene expression, chromatin remodeling and DNA repair. It’s role in the nucleus is so extensive that it interacts with all three RNA polymerases, regulates essential transcription factors like SRF, and even has its own dedicated nucleocytoplasmic shutting mediated by exportin 6(reviewed in 2). More recently, new evidence of nuclear F-actin appearance and function has been reported; whereby, it plays a role in homology-directed DNA repair, chromatin motion, and postmitotic expansion of the cell nuclei. A recent study Okuno et al. identified nuclear F-actin as a hallmark of totipotent zygotic pronuclei, and misregulation of nuclear F-actin dynamics impeded normal embryonic development(3). They showed that altering nuclear F-actin dynamics in pronuclei led to abnormal development of mouse embryos in part through suppressed DNA damage repair due to misregulation of control checkpoint genes. Sophisticated optogenetic control of cofilin nuclear localization was used to furter define the importance of F-actin assembly and disassembly in developmental progression.

Oxidation of Actin in Cytokinesis

Actin’s role in cell division has been highly investigated, and its known to be a critical component of the actomyosin constricting ring that essentially pinches the cell and divides it into daughter cells. Additionally, more recent studies have identified prophase-specific perinuclear actin for its role in coordinating centrosome separation to facilitate chromosome segregation(4). An exciting new area where actin also participates in cell division is through regulating abscission, the terminal step of cytokinesis. Work by Echard and colleagues first showed MICAL-1 oxidation and depolymerization of actin was a key step for ESCRT-III recruitment and abscission(5). Physiologic and reversible methionine oxidation of actin at Met 44/47 is regulated by the intracellular flavoprotein monoxygenase protein MICAL and the converse reduction by the reductase MsrB(reviewed in 6). Echard’s group followed up on their initial study and determined that Msr-B2 is recruited to the midbody of the intercellular bridge during episodes of chromosome lagging and functions as a NoCut checkpoint to prevent binucleated cells from forming(7). Importantly, they showed that Msr-B2 co-localized with Aurora B and ANCHR NoCut checkpoint proteins. Depletion of Msr-B2 resulted in reduced F-actin in intercellular bridges and enhanced numbers of binucleated cells. These studies highlight a physiologic post-translational regulatory mechanism that controls novel functions of actin during cell division.

A novel cellular mechanism called neutrophil extracellular traps (NETs) are formed by web-like DNA, histone, and cytotoxic-protein structures that are utilized by activated neutrophils to combat pathogens as part of the innate immune response(reviewed in 8). This process called NETosis has been shown to kill pathogens like bacteria, viruses, and fungi, but has also been shown to be detrimental in autoimmune diseases. Thiam H. et al recently used high-resolution time lapse microscopy to define the cellular events that take place which allows the DNA to be released to the cell exterior during NETosis(9). Interestingly, this study identified actin disassembly as an early morphological event in the process, followed by microvesicle shedding, disassembly of vimentin intermediate filaments and microtubules. Several minutes later DNA decondensation, nuclear rounding, and nuclear rupture occurred, which led to DNA release into the cytoplasm and ultimately extracellular DNA expulsion. Importantly, they pre-treated cells with jasplakinolide to stabilize actin, and while this did not affect processes like microvesicle shedding or DNA decondensation in response to NETosis induction, it did suppress the total fraction of cells that expelled their DNA. Thus, they concluded that actin disassembly is a critical early step in NETosis that also plays an essential role in extracellular DNA release during NETosis. 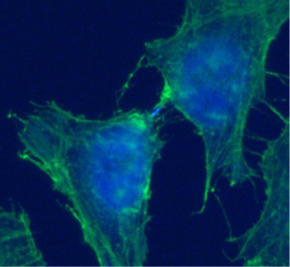 Figure 1: Terminal stage of cell division. 3T3 cells were co-stained with an actin antibody (green) and an nuclear and intercellular bridge marker, Aurora B (blue).

Undoubtedly, the roles that actin plays in the cell continue to grow, and it is not far-fetched to believe that actin may be important in almost every cellular process. One thing that became quite clear in these studies was how the advancement in tools and techniques to study actin was indispensable towards their success. Tools such as live cell imaging probes like SiR Actin which was used in the high-resolution live cell imaging experiments to define actin’s role in NETosis, or the oxidized specific actins used to define its role in intercellular bridge abscission, and the optogenetic tools that allowed for spatiotemporal control of cofilin to elucidate the role of nuclear F-actin dynamics in development. Another example is the advancements in defining the structure and function of actin, which has also been possible due to novel technologies such as Cryo-EM(10). It is truly an exciting time to be an actin investigator with new functions and regulatory mechanisms awaiting discovery, and Cytoskeleton Inc. is here to help with essential actin tools and kits.